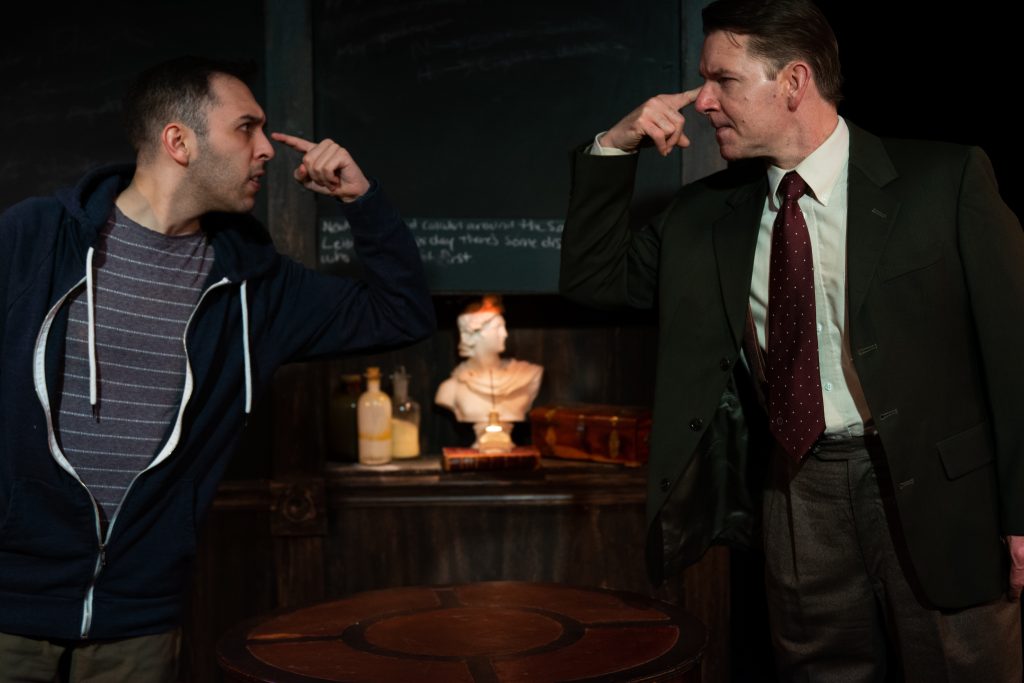 Isaac Newton (1642-1726-ish) and Robert Hooke (1635-1703) are giant historical figures, but not in Lucas Hnath’s quick-talking historical drama “Isaac’s Eye,” on the intimate stage at Redtwist. They are so ostentatiously invented that a narrator who pops in and out of the action repeatedly reminds us that the depictions of the scientists we’re seeing have been created purely for the show. The self-declared fictions of the play fill in gaps—or replace known facts—in the lives of the two men.

Movie and stage biopics have a long tradition of doctoring the historical record, almost always without warning. Oh, sure, there are a few hallmark facts in most of the cooked accounts and there are here, too. There’s the oddity of Newton’s prematurely white hair, and the fact that Hooke made copious diary entries on his sexual health, including the strength of his ejaculations. And that both men’s religious leanings strayed wide of church gospel. Hooke, once bound to be an Anglican cleric, clashed with the church over science. His heretical studies of fossils presaged better-formed theories of evolution. As for Newton, he pored over the Bible hoping for clues to God’s role as celestial scientist. “Isaac’s Eye” trades on the fact, too, that both Newton and Hooke were polymaths of the Enlightenment variety. Each probed widely in newly percolating scientific fields. Each was aware that experimentation—a practice newly central to inquiry—would be the crucible on which their theories would stand or fall. And Isaac Newton, for reasons unknown, did once stick a needle deep into his own eye. 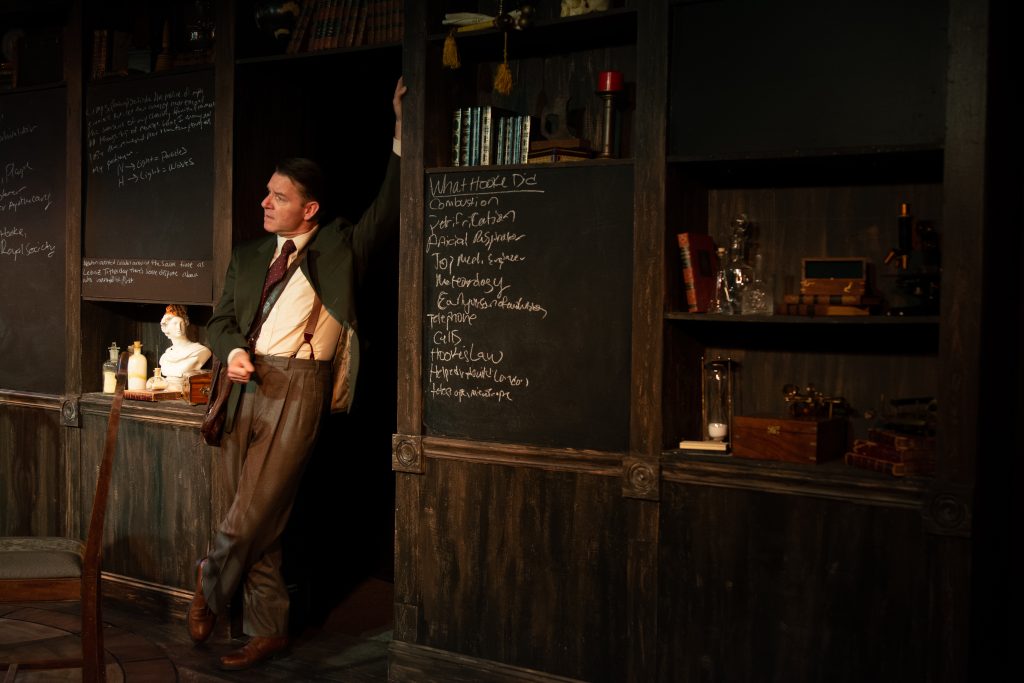 The action begins when the older, established Hooke receives correspondence from the yet-to-be-celebrated Newton. The younger scientist beseeches Hooke to let him into The Royal Society. Newton believes that membership in the august British scientific body will give him the credentials he needs, both for respect in the present and to get credit from posterity for his discoveries. Hooke holds the key. Newton’s brusque, tactless notes to him signal the holes in his personality. He’s a dour, humorless, self-absorbed genius who cannot pick up on social cues. At last, Newton sends some manuscripts which demonstrate that the younger scientist is heading down the same roads of inquiry as Hooke. Hooke sees his own work threatened, and perhaps bettered. Hooke leaves London to meet Newton in the upstart’s country home and to plot a way to keep him at bay, out of the public eye and out of The Society. 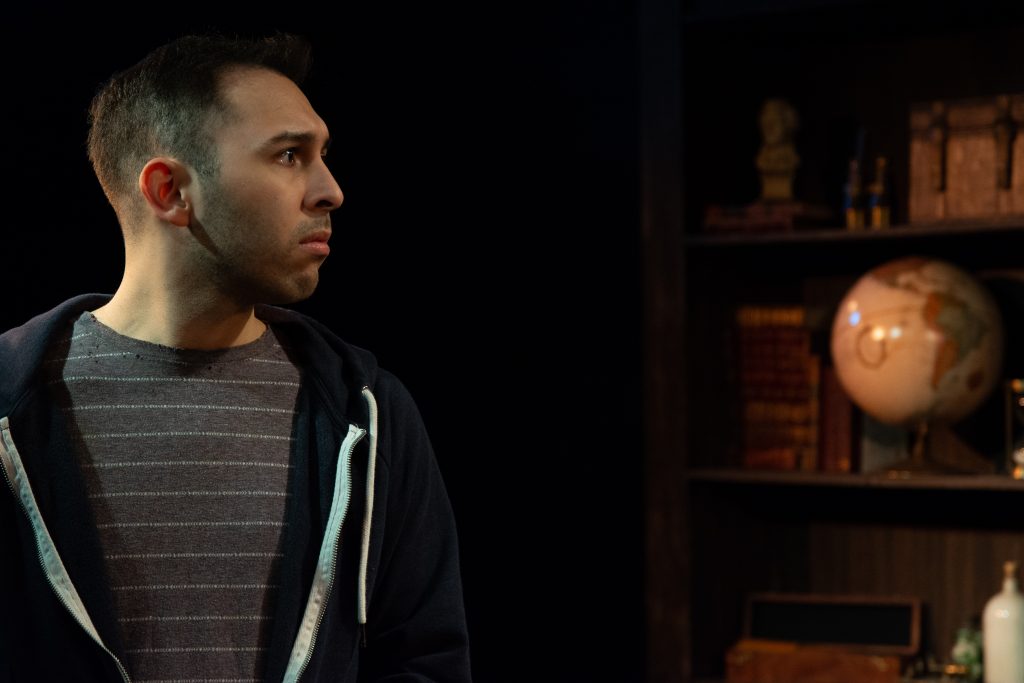 Joshua Servantez plays the young Newton as mopey, morose and intense. He professes to enjoy the company of Catherine, a local apothecary, played with heart and gusto by Brooke Reams. Yet, only Newton’s yearnings to be proved brilliant sound sincere. There’s a ruthlessness attached to Newton’s goal, which the scientist will lie and steal to achieve. And which Hooke will lie and steal to thwart. This battle of wits fills the play as two of the highest-IQ humans who ever lived jockey to advance their stature and knock the other down. So much ego, so much venality.

The title of the play refers to the one bit of science—or pseudoscience—at stake in the play. Newton has hypothesized that an experiment that requires a needle to be inserted into a living human’s eye will prove his theory on color. Newton believes color is a collection of particles. And just as importantly that Hooke’s theory, that colors are waves, is wrong. (In fact, color combines waves and particles.) Hooke contrives to pressure Newton to conduct the needle experiment on himself. Don’t expect Oedipal consequences here; the torture is for glory, not for shame. Still, watching the men get to that point is riveting. Other more figurative twists and turns keep seat edges burnished, too. It’s reminiscent of the intellectual jousting in “Sleuth” and “Amadeus.” The show’s energy is propelled by a bravura, often funny, turn by Redtwist Ensemble member Michael Sherwin as Hooke and by Jackie Seijo in the dual role as the puckish and subversive narrator and a suitably dismayed plague sufferer who, cruelly, becomes the two scientists’ lab rat. The most unsettling pathology in the show, however, is not the bubonic kind, but the sociopathology that often drives discovery.