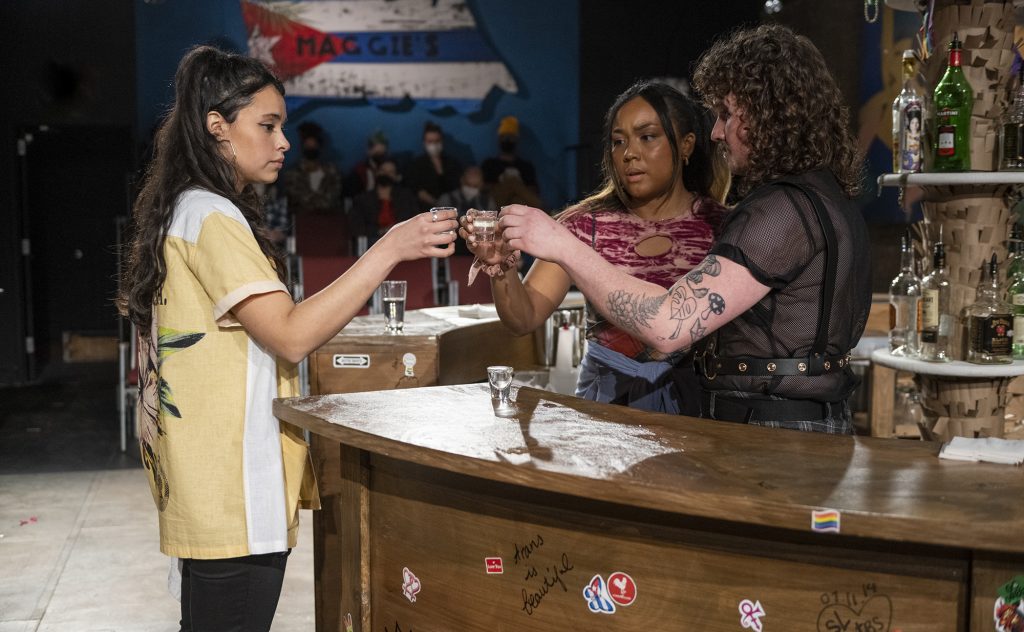 The bartenders at Maggie’s have drawn up a list of suspects. Someone who drank here last night stayed behind to vandalize the bar after the rest of them had locked up, and they need to figure out who it was. In casting their memories back over last night, their emotions have bubbled over, tempers have flared, and they’re trying not to blame themselves or each other for what’s happened.

But in the middle of everything, one of them makes an offhand joke about geriatric, pearl-clutching Republicans that makes another snort with laughter. “Sorry, sorry,” she says, “Not the time.” But it is kind of funny, though. And they realize how desperately they need to feel light again.

Against a world that makes you feel unsafe, a moment of joy is an act of rebellion.

“Laced,” About Face’s new production written by Sam Mueller and directed by Lexi Saunders, is full of hard-won joy. The walls around the characters scream hate, slurs spray-painted across beautiful murals meant to comfort them and their patrons, reminding them just how permeable their sacred spaces are. And the play’s setting, in 2016 between the tragedy at Pulse and the Presidential election, further encages the characters. Audra gives the sentiment its voice: they hoped to be one of the lucky ones passed over by hate, but today it’s at their door.

As the bartenders, Minnow (Daniela Martinez), Cat (Collin Quinn Rice) and Audra (Mariah Copeland), reflect on the previous night’s events, they realize in the process just how much of their lives have been spent feeling unsafe. Fathers who vote Republican in spite of their queer children. Bodies that clench from trauma and deny the chance for pleasure. Queer friends who judge bisexual people/folks/etc. for dating cisgender, heterosexual men. Elders who leave the young to find their way without a compass. The pressure to choose what gender you are, as if choosing was the goal. Brains that black out without alcohol’s help. And around them, on the very walls, the proof that someone out there hates their existence.

But in response, joy erupts impossibly. It has to. What makes “Laced” so engaging is the refrain that because of the existence of suffering, there must, must, must be happiness. Not just hope, but true joy and celebration. Minnow gushes over a new “hella Cubana” dance track that feels like a message from her late mother. Audra at first makes snark at the baby gays entering the bar but can’t help admiring their fake IDs and cheering for their first kisses on the dance floor. Cat admires a patron showing off their gnarly new gender-affirmation surgery scars. They later deliver a monologue, no, a veritable aria about the perfect moment in time when ancient Persian courtesans and warriors both wore heels. “I realized,” Cat says, “slipping feet into shoes was me preparing for the battle of being.”

“Laced” portrays the need for happiness not as sentimentality or escape but as a hard-nosed and battle-ready response to a harsh world. Its characters’ trials and triumphs show that joy can be thrown like a brick, like a molotov cocktail, like a party.