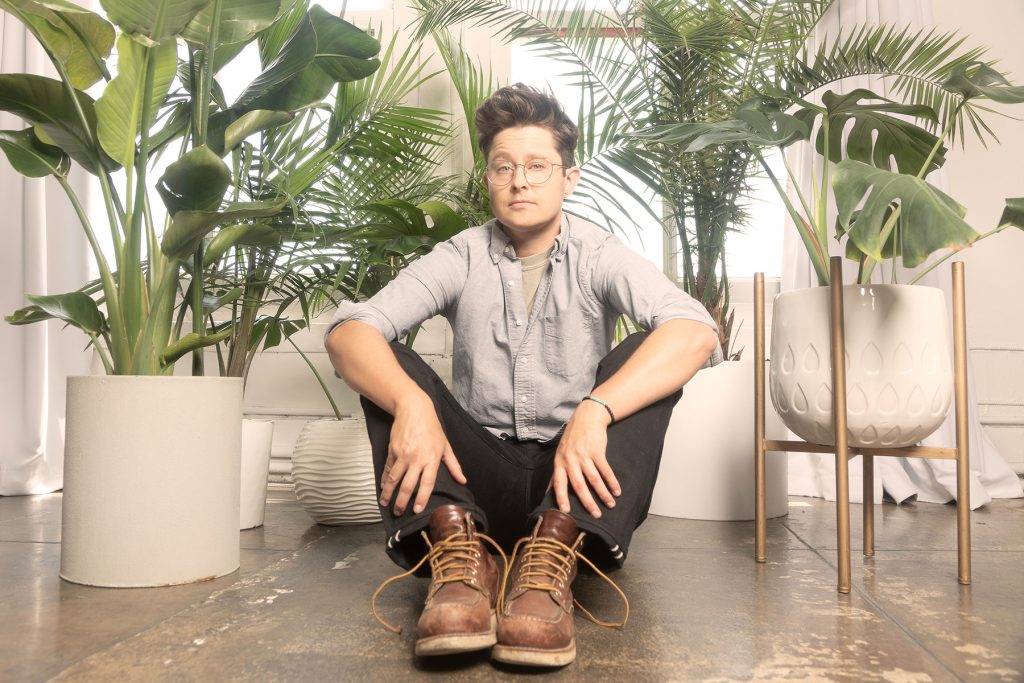 Reached mid-flight heading back to Los Angeles, comedian River Butcher, an even-keeled comic who always seems at least slightly bemused by the world around him, is feeling good after back-to-back shows in Indianapolis and Fort Wayne. “I’m very grateful for the people who were willing to come out,” he says. “I feel like my audience are the kinds of people who have been very conscientious during the pandemic and I’m grateful to them for showing up.”

Like a lot of spaces, the comedy world is easing into a post-pandemic comeback and Butcher is getting back on the road (or taking back to the skies). “It’s been difficult to gain momentum, and honestly, people are really looking to experience public life again, but I also think everyone is just so exhausted as well,” says Butcher. “I do really enjoy being back on stage in a room full of people who are into what I do. That really is a blessing that I feel I have begun to have a better understanding of its enormity now.”

Butcher is headed to Chicago next with a show at The Den Theatre (on the Heath Stage) on April 9 (“My good friend Bobcat Goldthwait is going to drop by as well,” he adds when discussing the show). Our conversation was originally supposed to be over the phone, but a delayed flight moved us to a text exchange in the sky instead, which ended up being an equally ideal way to discuss the upcoming show, Butcher’s background in the Chicago comedy scene, and his views on the current and ever-evolving comedy landscape.

Although Chicago is where he started doing comedy as an adult—he’s quick to point out his real start was at Odyssey of the Mind in Akron, Ohio in the sixth grade—this show will be the first time he’s been back on a Chicago stage since performing at Thalia Hall in 2019. His first open mic was the legendary Cole’s (down the street from The Den and still worth checking out every Wednesday night) and he was part of Chicago Underground Comedy, Entertaining Julia and The Lincoln Lodge. He won the queer comedy contest at Zanies in 2012 before relocating to L.A., where he still lives.

Compared to a decade ago, he can see how much the Chicago scene has evolved since then, when forms of comedy felt much more siloed. Butcher is stoked to see the most recent batch of successful Chicago comics—comics like Sarah Sherman, Meg Stalter and Caleb Hearon—doing much more crossover work. “The old way is very much The Old Way™?,” he says. “I think also the internet helped break the old boys club of standup and what’s possible…it’s like, who cares what the old twelve-plus-year cranky standup guy/gal thinks of your set? You have 100x the reach they do. It starts to break the old ideas apart, which is what I’m all for.”

“I think, to me at least, you can bypass whatever you want and we are really at a place in comedy where instead of being validated or accepted into the mainstream, we are existing outside of that and not making concessions to have to play clubs or fit into a predetermined idea of what stand up should be,” he says. “There is a possibility for success without compromising the integrity of what you do. Or waiting for a club owner to bless you with a weekend in an otherwise very hostile environment.”

Butcher’s most recent special—Comedy Central’s “A Different Kind of Dude,” which premiered in January—makes it clear what that kind of comedy can look like. In it, a confident and well-coifed Butcher, sporting a denim jacket, discusses transitioning during the pandemic, a certain type of Midwestern “dude” and the smallest act of heroism imaginable, all in a breezy, conversational style that sometimes belies the gravity of his content.

“I no longer believe that we have to be in competition with those who are outwardly hostile to us (us being anyone who finds themselves on the receiving end of fascistic oppression by the government or their fellow people),” says Butcher. “That I need to conquer the transphobes to win. I give too much over to them when I do that. The whole point is that there is enough for everyone.”

This “enough for everyone” mentality pervades both his comedy and his offstage conversations, where—and I witnessed this firsthand, but you can see it throughout the many interviews he’s taken part in—he’s especially open to discussing the use of words and phrases and the meanings behind them, without any aim to call out. “Because the point is not about ‘being right,’” he says. “It’s about being open to everything the world has to offer.”  During our text exchange I asked a question that led to an exchange that he asked me to include in its entirety because it could be educational for others.

ZF: What do you see as the evolution of the conversation on trans issues in comedy over the last several years? And where do you think it goes next?

RB: I have a follow-up to that question: what do you mean when you say “trans issues”?

ZF: I was thinking that right after I typed it! I mean the discussion of trans people in comedy—both as comedians and non-trans comics and their material.

RB: Awesome! I appreciate that.

ZF: Definitely. I loved in another interview I read where you told the interviewer the term “identifying as” is kind of off now. And they were like thank you for telling me. In all your work—and interviews I read—I see an approach that most people are trying their best and a discussion of pointing things like this out isn’t some kind of “gotcha—you’ve failed at this!”

RB: Not at all! I could tell that what you followed up with was likely what you intended. And I’m sure at some point I used “issues.” Probably “women’s issues.” And at some point I heard someone say it differently so I changed. And with the “issues” thing, it detaches the person from their existence, from their own humanity. We become a concept or ideology to be discussed. There is a distance there. Which I think is what is always at play when someone does (intentionally or not) transphobic material.

Despite the tack taken by some comedians over the last few years, Butcher has hope for the future of comedy in regards to trans-centered material because he sees a lot of trans comics coming up now who don’t care what audiences think, and challenge everything. “And so I have hope, because there are so many good comics who are trans right on the verge now, and so I know the future is in good hands,” he says. “And I hope I can play a small part in it.”

“As a comic who had a pretty direct experience of the ‘gay material’ age (2010-2018), I think the window of pure garbage that we will have to sit through will be a bit smaller,” he adds. “Although legislatively it is way more intense.”

Wrapping up our conversation, Butcher wanted to remind potential audience members that he’s still aiming for laughs. “I talked about some ‘heavy’ stuff or ‘serious’ stuff but like, I will make it fun at the show!” he says with a laugh (or an lol if you’re being pedantic). “That’s the job ya know.” And at this moment, few are as cut out for this job as River Butcher.