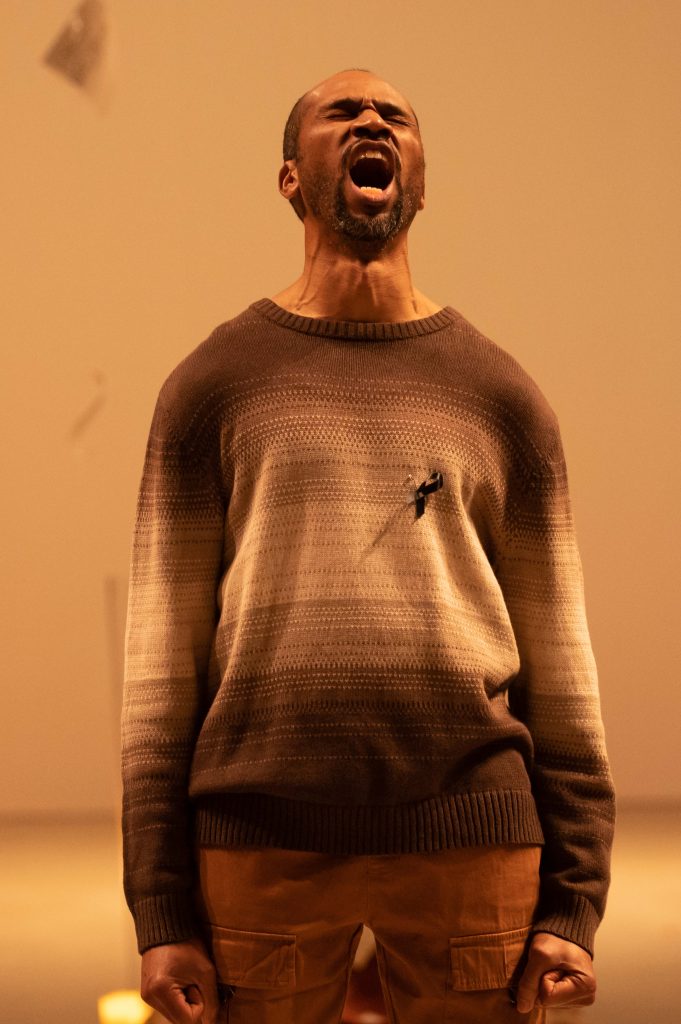 Anthony Irons in “What to Send Up When It Goes Down”/Photo: John R. Boehm

“Let me be clear: This ritual is first and foremost for Black people,” one of the supremely talented and versatile performers in “What to Send Up When It Goes Down” says, in the stern voice of a political poet, shortly after the performance begins. “We are glad non-Black people are here. We welcome you, but this piece was created and is expressed with Black folks in mind. If you are prepared to honor that through your respectful, conscientious presence, you are welcome to stay.” It’s effective. It’s affecting. It’s good theater. “WTSUWIGD” is poetically and powerfully scripted by Alesha Harris. It has blocking that verges on choreography. It’s acted by some of the finest actors on Chicago stages. But it aims to be more than theater. Theater is equated with ritual, and vice versa. The production leaflet calls the show a “play-pageant-ritual-homecoming celebration” responding to “the gratuitous loss of Black lives” and interrupting “discourses that enable the ubiquity of racialized violence in our society.” The early warning to, and about, non-Blacks (such as me) gives the impression that the presence of evil and the potential for violence in the room is strong. It’s a necessary illusion. Theater, and rituals, usually invoke tensions and dangers from the world outside and bring them into a safe space. In this case, into the pristine, airy, biophilic home of the Gray Chicago gallery. And amid an audience already signed up to offer their respectful, conscientious presence. But the warning plants fear and equates non-Blacks in the audience with an evil all about. As dramatic tension goes, it’s a doozy.

“WTSUWIGD” takes on a wide range of social toxins and portrays an equally wide range of how Black people cope and respond. Yet, the central theme is the evil of police violence against Black people. In its ritual mode, “WTSUWIGD” is perhaps most devastating when it enlists the audience early for an incantation of the name Botham Jean, one of the victims of a murderous police officer. An unarmed twenty-six-year old Dallas accountant, Jean was shot while eating in front of the TV in his own apartment when a Dallas cop, Amber Guyger, burst into his living room and shot him, claiming she mistakenly thought he was a thief in her apartment, which in fact was directly below on another floor of the building. Cast and audience together form a circle and recite Jean’s name twenty-six times. The caution at the play’s start begins to sink in. Because there’s truth in it and by the end of the play-pageant ritual’s ninety minutes, it is soul shaking. 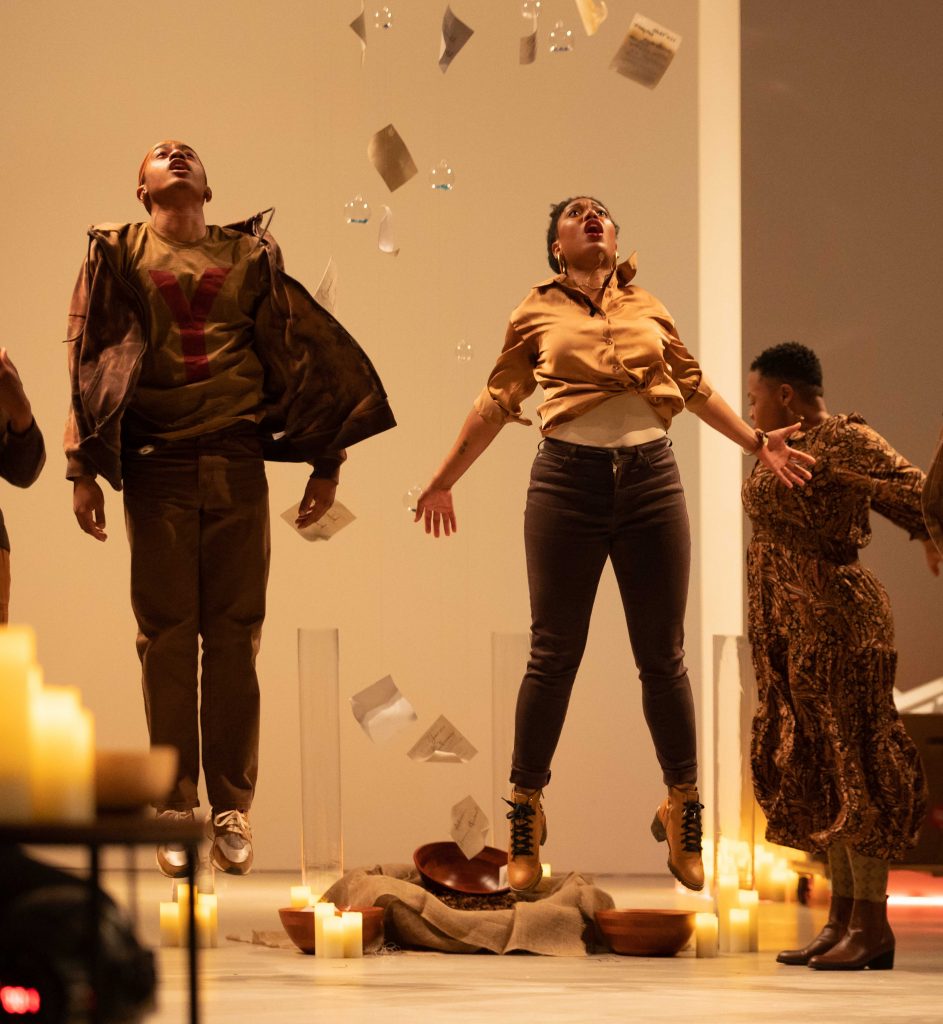 Victor Musoni and McKenzie Chinn in “What to Send Up When It Goes Down”/Photo: John R. Boehm

“WTSUWIGD” borrows much from the tradition of agitprop theater. Its style is close to the street theater pioneered in Chicago in the 1960s and seventies, when troupes performed outside without sets and for free, putting on shows that combined strident critiques of “The Establishment,” with broad satire, song, poetry and dance. Street theater demands a lot of its practitioners, who, like the cast in “WTSUWIGD,” create huge tableaus without sets, and work to enlist audiences as participants in politically charged “happenings.” Much of that is at play here, too, and the actors of Congo Square Theatre company can do it all.

The performance weaves several plays with the bigger work, highlighting the range of the necessarily all-Black cast. There’s a fable about a white employer and the Black kitchen maid whose anger is a weapon. There’s a take on “the talk” in which a young man is warned of the dangers of appearing too confident or diffident in a white-dominated world and coached on invisibility and obsequiousness.

If the show is not aimed at white audiences, it scores some direct hits, nonetheless, when the cast takes on white archetypes—such as a Southern lady with a chauffeur—or Black archetypes, such as the obsequious servant or angry Black man, intentionally ironic types modeled on non-Blacks’ stereotypes of Blacks. The show may be about healing, but it scrapes wounds first.

At the end of the proceedings, the non-Black audience members are required to remove themselves from the theater area and gather in the lobby, while the Black members come together for closure among themselves. Perhaps it’s a measure of how beyond broken race relations remain. As a thought experiment one might contemplate a Chicago theater today that asked Blacks to remove themselves at the end of show, or a theater company that enlisted whites to play Black archetypes broadly (as white often did in the past). Non-whites in that imaginary audience, in Chicago today, might not “honor that through [their] respectful, conscientious presence, [and feel] ‘welcome to stay.’” For all the striving for new inclusive theater, there are hard lines which cannot be crossed. Because for too long, hard lines outside the theater have been crossed. There you have it: a white reviewer’s take on a show whose creators say the place of white viewers is to not make trouble. That their show is not for whites, anyway. I don’t buy that. Everyone should behold this production and measure how it moves them. During the run of “WTSUWIGD,” half of the audience seats will be reserved for community groups, with, presumably, mostly Black members, to come see and participate. That will likely create a new show, each with its own tensions and routes to reckoning and healing.