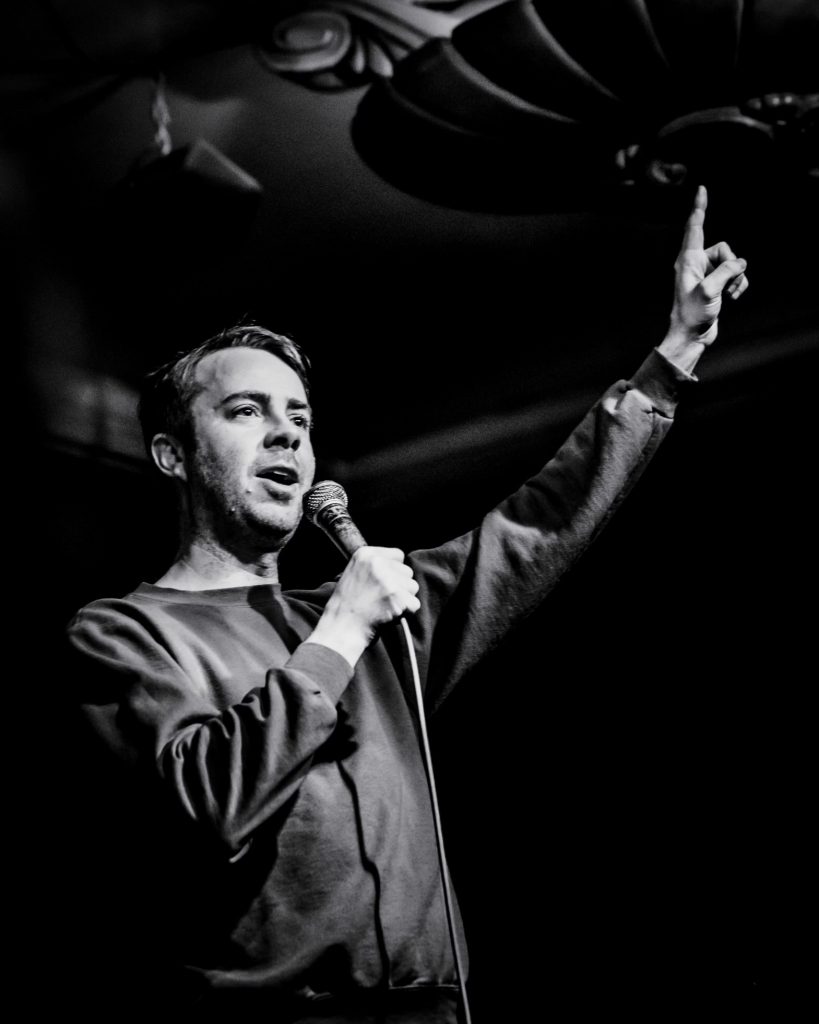 Geoffrey Asmus at the The Paper Machete

“I think comedy is better than it’s ever been right now,” says comedian Geoffrey Asmus over the phone in Chicago. “We all went through something traumatic—whether you believe in it or not it was still a traumatic two years.” After the pandemic shut comedy down for an extended period, he’s glad to be back on stage and thinks audiences are readier then ever to laugh. This week Asmus, who performs all over town, will be part of the line-up for the Laugh Factory’s “Chicago’s Best Stand-Up” shows on both April 11 and 12.

“I think people always say ‘PC culture’ but people are laughing at the darkest, weirdest stuff they’ve ever laughed at,” he says. “I think comedy’s the best it’s ever been. I think people being over-sensitive is exaggerated. The crowds are amazing. People want to come out and see comedy, too. It’s cool to be into comedy now.”

For the frequently edgy Asmus, who released his first album last year—the cheekily titled “Prodigal Little Bitch” (recorded in Minneapolis in 2019 and available on all streaming services except Spotify*)—these audiences fit right into his dark-comedy-with-a-smile ethos. And though he’s lived and performed in Chicago and New York since 2015, the Minnesota native has found himself moving up to headliner status at clubs around the country now that venues are reopening. “In the last year I’ve been able to check off a bunch of clubs I’ve wanted to headline at, kind of my comedy bucket list,” Asmus says. “Maybe things are finally looking up for Geoffrey.”

Asmus wasn’t into stand-up as a kid and didn’t watch his first show until he was twenty-one years old and working on a religious studies degree at University of Wisconsin-Madison. “There was a comedy club in Madison that’s known as one of the better comedy clubs in the country—a hidden gem—and we would go to the open mic night and my friends egged me on to do it,” he says. “We’d go there every week and they finally convinced me to do it. And then I fell in love with it right away. I started literally a month before I graduated, invalidating everything I had done in college up to that point.”

He started off with dark material and a dry, deadpan delivery, often bringing the Bible on stage and reading from it. “I even read from the Koran,” he says. “That’s something I probably wouldn’t do again, but you could do that five years ago.” Though his material is still fairly dark, he’s become more animated and energetic on stage, with a big smile and frequent giggling that belies the darker bent of his jokes. “Probably just more confident, honestly,” he says. “I learned you can’t just be edgy. You have to have some heart also. If you smile while saying something dark it cuts the legs out from under it a little bit.”

The inner workings of his style will be on display at these upcoming shows in Chicago where he will work a mix of new and old material along with a lineup of other Chicago headliners, before he hits the road to tour in Arizona, Iowa, Tennessee and Kentucky over the next few weeks. “Tuesday is actually one of the better shows at Laugh Factory,” he says. “It’s kind of like a night where you get to work on your jokes.” He attributes the great shows to the weeknight crowds as well. “Tuesday, you come out, you like comedy,” he says. “And you can go see on a Tuesday night a lineup of amazing comics that would be the headliner in another city. Chicago is a city of headliners.”

When he’s not on stage, Asmus is working on a podcast he started with friend and fellow comic Alex Dragicevich called “You’re an Idiot.” “I always mocked podcasts,” says Asmus. “Now I do it I’m like, ‘It’s kind of fun.’ I’m just talking with my good friend every week. I should have been doing this for the last few years.” Asmus likes to tell people it’s the only funny podcast in America. “Me and Alex are the only funny white men in America,” he adds.

This week you can find out what one of the only two funny white men in America is joking about before he heads out on the road to spread his uniquely upbeat brand of biting humor to audiences across the country.

*(“This is the other Spotify controversy that no one really talks about,” says Asmus. “They took all—not all, but like ninety percent of stand-up—off because they refused to pay us the same they pay musicians. I’m not getting the nuances of it, but they weren’t paying us. Which kind of sucks because I was actually doing pretty well on Spotify with 50,000 listens a month or something. It wasn’t my choice. I don’t really understand whose choice it was to take it off. I think they’re still fighting with Spotify about it.”)