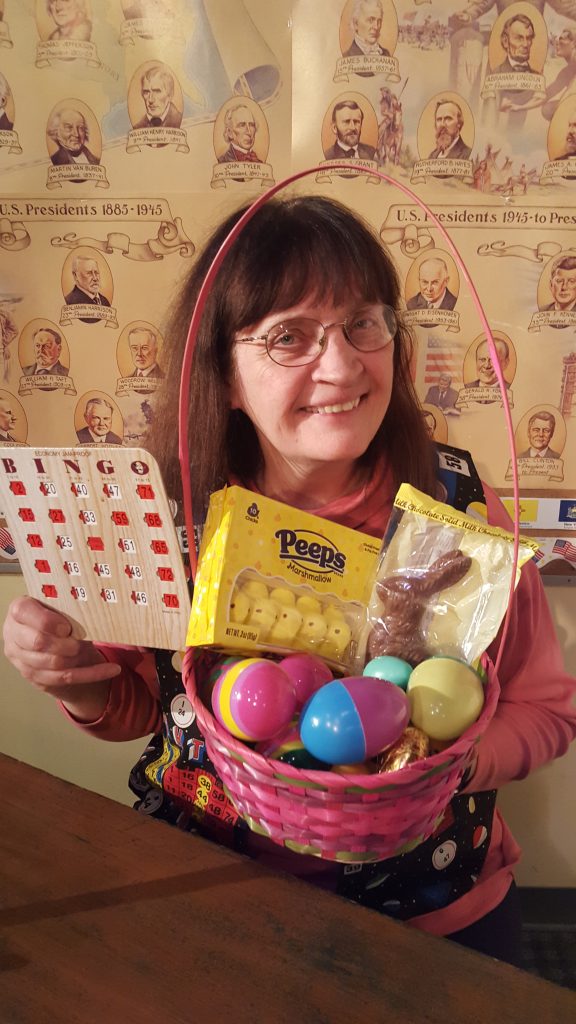 Every December, there are myriad Christmas-themed shows, including comedies and satires. But an Easter show? “Easter Bunny Bingo: Jesus, Resurrection, & Peeps!” takes an Easter egg roll at filling that empty basket.

The brainchild of Vicki Quade, who conceived and co-wrote “Late Night Catechism” (in its twenty-ninth year and playing in repertory at the same venue), “Easter Bunny Bingo” follows the same format of a Catholic classroom setting where the audience functions as the students.

Former nun Mrs. Mary Margaret O’Brien—played in rotation by Liz Cloud, Nancy Greco and Quade herself (such as at the Palm Sunday performance I saw)—is hosting Easter Bunny Bingo at Our Lady of Good Fortune and quizzing and informing us about Easter traditions and trivia along the way.

Easter was originally a pagan holiday, we learn, but as Christians took it over and wanted to convert people, they didn’t want to “tick them off.” So that figured out how to keep celebrating aspects they were used to within the new festival. (That Easter is rarely on the same date as the Full Moon figured in.)

Since “H” is for History, Bingo is played—yes, for real, everyone gets a card—following the “H” shape on the card. An audience member (who happened to be yours truly) thought he had Bingo but actually had a “False Bingo” in another row and thus was brought onstage where a “I have disappointed Jesus” sign was placed over him. He then was photographed with Mrs. O’Brien and his False Bingo card because “the Archdiocese likes to document these things.”

The prizes for winners included “a Jack and Jackie Kennedy holy card” and wool crosses made by a ninety-two-year old nun to hang on your rearview mirror to protect you when you’re pulled over, as “most Chicago cops are still Catholic.”

A Catholic McDonald’s owner in Cincinnati was the one who came up with Filet-O-Fish for slumped meatless Friday sales but not before Ray Kroc had tried the Hula Burger, a grilled canned pineapple slice and cheese on a bun.

Easter candy can be tricky because you might have given up alcohol for Lent but then have some Piña Colada or Daiquiri jelly bellies. Peeps can be used for Peep Duels in microwaves to see whose gets larger without exploding.

Religious movies were a staple of Easter and Mrs. O’Brien takes us through all of them with flash card photos. A contemporary drinking game is to lay out shots and drink for every famous cameo you spot in the epic “The Greatest Story Ever Told.” “Yes, that’s John Wayne at the foot of the cross. If you were on the lot, you were in that film.”

As a public service, given that many even practicing Catholics have not been to confession during the pandemic, audience members get to play “Sin or Not Sin” to remind us what qualifies and what does not. Texting while driving? “Honk if you love Jesus, text if you want to meet him.”

The multigenerational and religiously diverse audience was both part of the entertainment with their interactions and also very entertained. And yet another show with another audience really would be an entirely new show. Bingo all around.