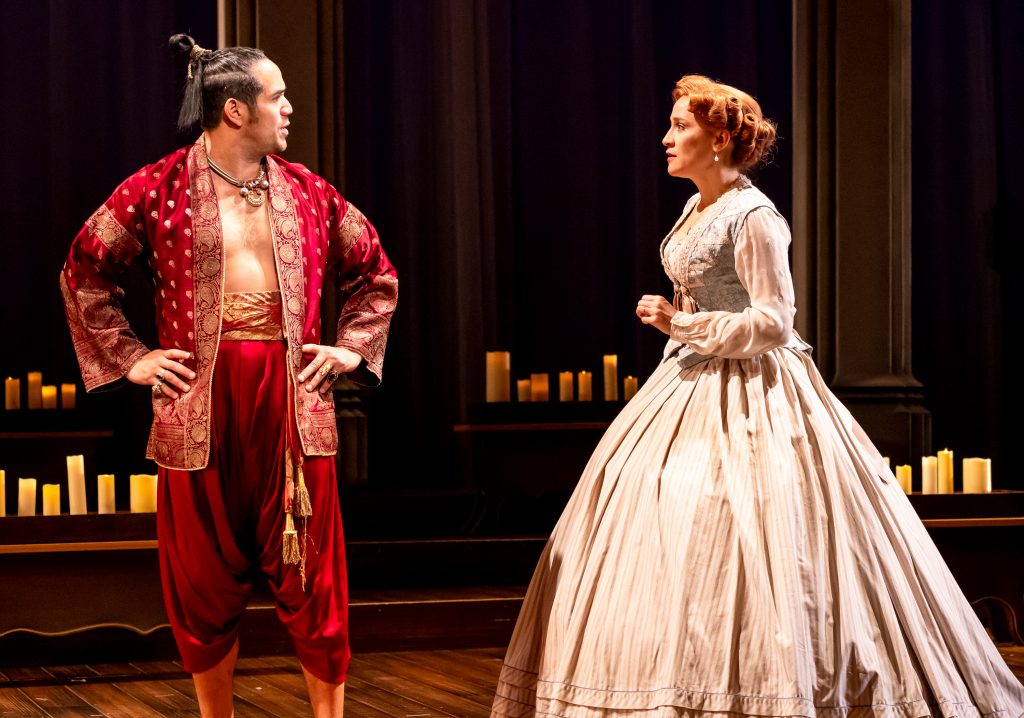 Adam Jacobs and Betsy Morgan in “The King and I”/Photo: Brett Beiner

Mary Rodgers—late daughter of composer Richard Rodgers, mother of composer Adam Guettel and a composer herself whose “Once Upon a Mattress” is running at Theo Ubique—once told me that she thought “The King and I” was the best of the Rodgers and Hammerstein collaborations.

Just as the Spanish-language quotient and Puerto Rican component of “West Side Story” have been ratcheted up in more recent productions as well in the Steven Spielberg film version, there has been a drive to “Asian-up” “The King and I” despite it being largely a Western fiction. (The real Anna Leonowens did teach the royal children but there is no evidence that she ever met the king.)

There are vestiges of this approach in the use of Thai-dressed dancers appearing as curtain-transition figures and a use of Buddhist-like open space. Gone are the ornamental sets that have become common in this show.

The King, played by Adam Jacobs—the original “Aladdin” on Broadway—is youthful, has a dark man-bun and facial hair, a distinctive look for the King. He is refreshingly more gentle and less a royal pain than often portrayed. Jacobs is a fine singer and his one song, “A Puzzlement,” is a highlight.

Anna, played by Betsy Morgan—who has played Anna on Broadway—is more world-weary, and seems at her best when she is telling off the King. Anna has the signature songs of the show but fares better with a more patter-like song, “Shall I Tell You What I Think of You.”

The biggest problem between Anna and the King is that there just isn’t much of a spark between them, central to our involvement. Thus, their banter rather than their relationship takes precedence, although Oscar Hammerstein’s writing is so effective, the show can work at that level.