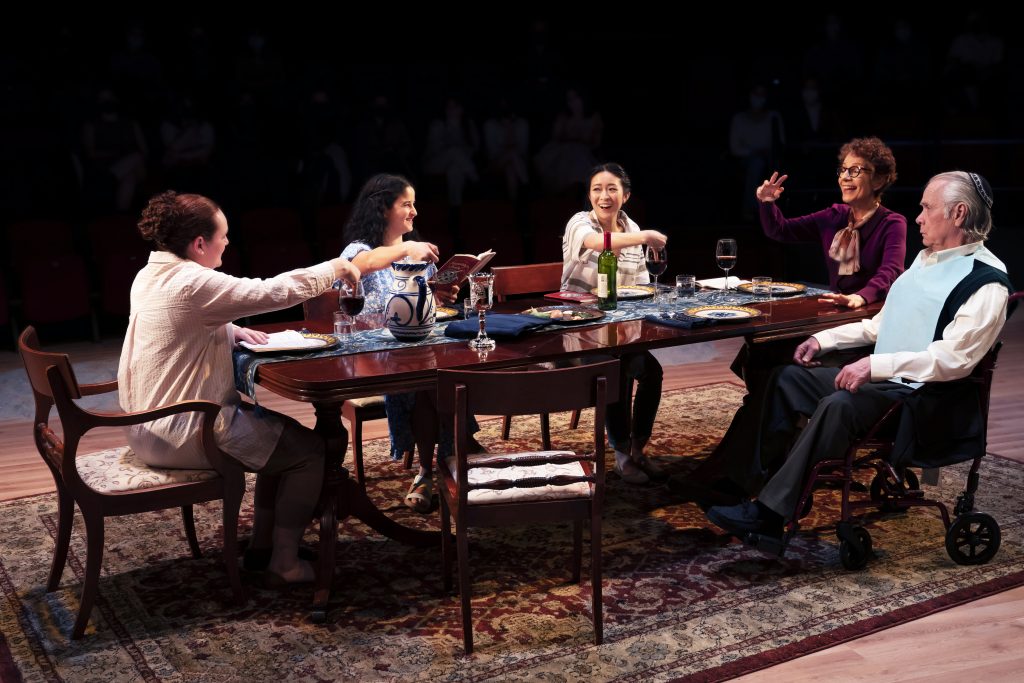 One would think that a play about Passover—the ultimate storytelling holiday, organized around a ritualized, protracted recounting of the Exodus from Egypt—would have narrative force and clarity. But Ali Viterbi’s “In Every Generation,” making its debut at Victory Gardens, never goes anywhere, instead getting bogged down in the dramaturgical equivalent of Red Sea muck.

Ambitious but unfocused, the drama takes place over a nonsequential series of Passovers, beginning in 2019 Los Angeles, as three generations of a Sephardic Jewish clan come together for an exhaustingly stressful and argumentative celebration. It then moves backward sixty-five years, as the grandparents from the first scene, both Holocaust survivors, make their first Seder in America. The story then jumps forward to 2050, to a dystopic future in which Jews are routinely beaten up by anti-Semitic mobs. The final scene hurls us back several millennia, to the first Passover reenactment in the Sinai desert, soon after the Hebrews’ hurried departure from Egypt. As manna drifts down from the sky, the grandparents tell the story of their people’s miraculous escape from their enemies, and their two granddaughters record the tale on a smartphone that they find in the sand, presumably in the hope it will go viral.

It’s all very twee and postmodern, and undoubtedly some will enjoy playwright Viterbi’s portrayal of the Passover story as an archetypal scenario of sitcom-level family drama, in which nothing changes over time. But this approach trivializes history, treating everything from sibling rivalry to genocide with equal seriousness.

The central characters are teen-aged Yael (Esther Fishbein) and her adopted Asian-heritage sister, Dev (Sarah Lo). For those familiar with the Seder and its fable of the “Four Sons,” the two girls correspond respectively to the Wicked and Wise offspring, who respond to the holiday’s story of flight and liberation selfishly, on the one hand, and respectfully, on the other. The cartoonishly “woke” Yael distances herself from her roots and her kin, seeing everything in terms of white privilege. Dev, who embraces her identity, is secretly applying to rabbinical school. It’s a controversial career choice in this family, in light of the scandalous fact that their rabbi father (who is never seen) was recently caught desecrating the pulpit of his synagogue with the president of the sisterhood.

Then there’s Nonno, their aged grandfather (Paul Dillon), who is in the late stages of ALS and thus resembles the fourth son in the story, who “wits not to ask.” Carmen Roman plays Nonna, his wife, with an unvarying and eventually grating combination of coyness and pluck. Their self-pitying daughter, who somehow blames Judaism for her husband’s unrabbinical conduct, is glumly portrayed by Eli Katz.

So who is the third child of the Seder story, the Simple son, who wonders innocently, “What is all this?” That would be the audience, as we try to sort out just what the play is about: The recurrent nature of trauma? Family dysfunction? The need to remember, or conversely, the need to move on? The need to stick together, or conversely, the need to find our own way? The play appears to want it all ways, and the high volume level and endless histrionics can’t hide the work’s haziness of theme and purpose.

Or its tastelessness, for that matter. This critic is still recovering from the scene in 1950s Los Angeles involving a Seder turned striptease, which takes place even as one character confronts his soul-deep guilt for surviving the Auschwitz death camp.

Under the direction of Devon de Mayo, the action has a hyperactive quality, with every movement and gesture amped up and underscored. Nuance, stillness and silence—the ingredients that create mood on stage—are treated like an eleventh plague, to be avoided at all costs. There’s no dynamic range here, and the two-and-a-quarter-hour-long play (with intermission) seriously drags.

In a play with multiple annoying characters, the most unbearable is Yael, whose aura of moral superiority masks a near-total lack of sensitivity to the feelings of others. Despite her nails-on-chalkboard personality, she and her somewhat more human sister seem to reconcile by final curtain, as they both deal with the reality of suffering and loss. The Passover Haggadah—the Seder script—has its own recommendation for dealing with the Yaels of the world: “Set their teeth on edge.” It would make for a better ending. (Hugh Iglarsh)