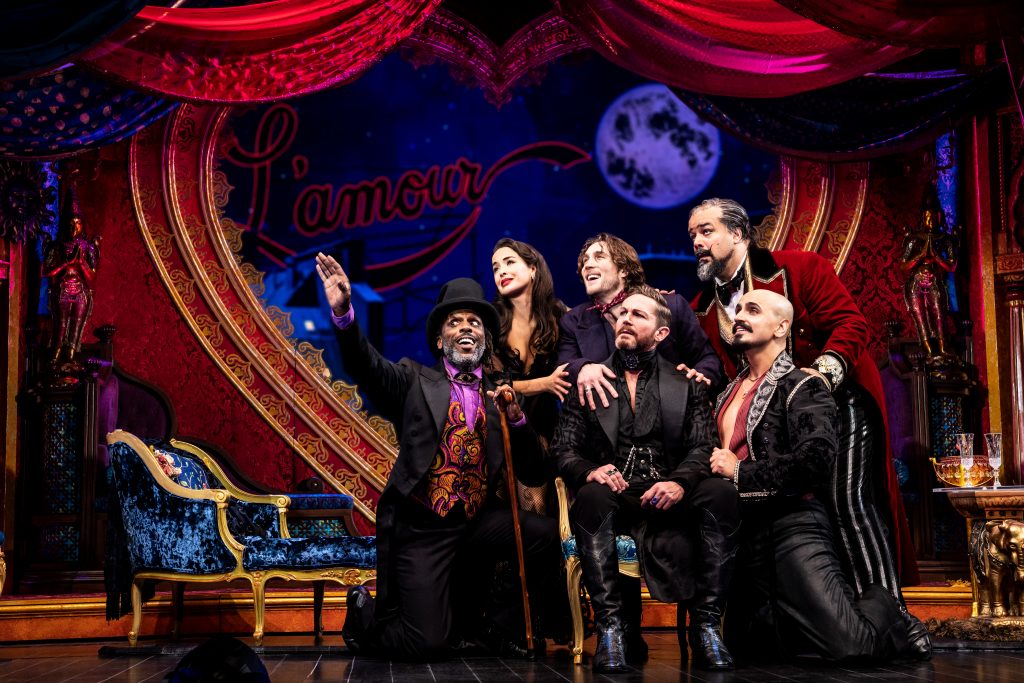 The cast of the North American tour of “Moulin Rouge! The Musical”/Photo: Matthew Murphy for MurphyMade

After a more-than-two-week delay where understudies went on for COVID-infected leads, the national tour of “Moulin Rouge! The Musical” finally had its kaleidoscopic, confetti-laden opening Thursday night.

From the moment the audience enters the Nederlander Theatre, the stage is bathed in glittery red with performers already on in place moving almost imperceptibly while a churning windmill is offstage upper left, a purple elephant to its upper right. A red neon “Moulin Rouge” sign reminds us we have been transported.

Host Harold Zidler (Austin Durant) reminds us in a salute to “Cabaret” that our troubles are to disappear and that everyone is welcome. Can-can dancers appear and start conventionally but are soon hitting the floor and aggressively head into steps that could just as easily be out of contemporary Bollywood as late nineteenth-century Paris. This cultural cross-fertilization is, much like the 2001 Baz Luhrmann “Moulin Rouge” film, a signature of this atemporal destination. Usually film imitates stage, especially concerning choreography. But in this case with Sonya Tayeh’s eclectic, relentlessly narrative-driven steps, the dancing juxtaposes in cross-cutting, cinematic fashion. Still, for those thinking that this is merely a live version of the film, the material has been refreshingly rethought and enlarged.

The music, of course, is a mosaic of a century of popular music from Offenbach to Madonna, greatly expanded and tinkered with since the film. Key lyrics and melodic hooks are kept, often merely invoking an iconic song before being broadsided by another. In other cases, “Nature Boy” is heard complete, as is “Diamonds Are a Girl’s Best Friend,” used as a dazzlingly effective way to introduce our heroine Satine (Courtney Reed) with sensuous choreography and sparkling stagecraft, literally. And the singing is happily top-notch throughout.

“Moulin Rouge” is eye-popping, to be sure. There are constant wows. It is at its best when we, as an audience, are the audience of the famed nightclub. When it digresses into backstage melodrama, the action ironically feels contrived, even if less cartoonish on stage than in the film. Unlike the mega-emotional operatic world of “La Bohème” or “La Traviata” that “Moulin Rouge” seeks to invoke, we never really get to know nor care much about anyone in this glittery make-believe world of smoke and mirrors. Nor are song bits and pieces enough emotional nourishment to guide our feelings or take us on a journey where even when loss occurs, we feel something other than the not-insignificant thrill of an imaginative extravaganza spectacularly rendered.