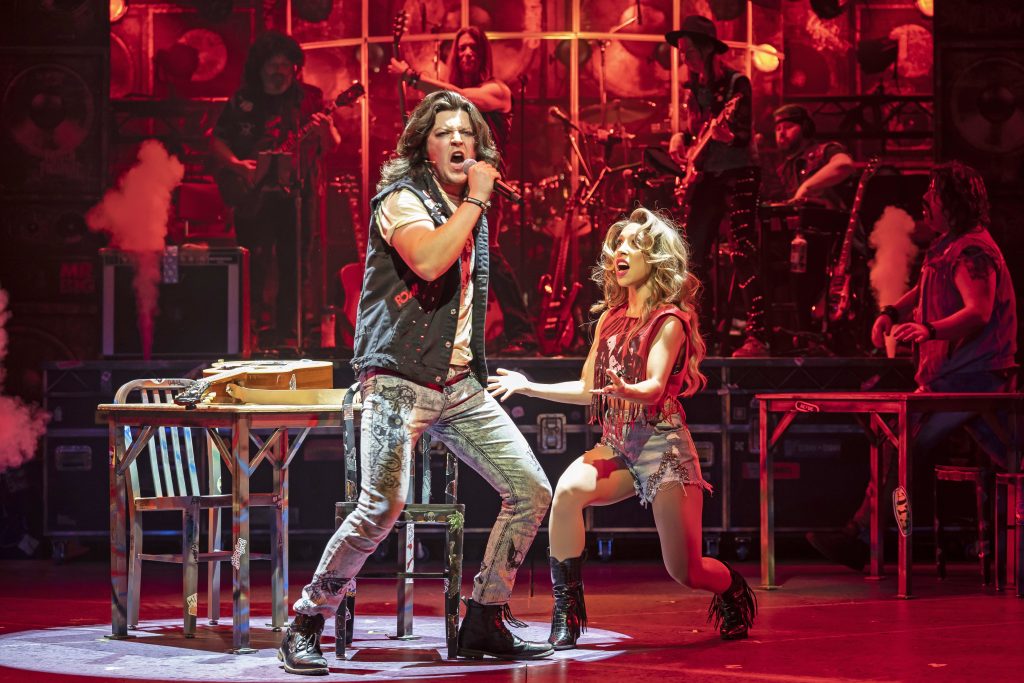 Paramount Theatre delivers the goods with their amped-up and electrified-to-the-heavens “Rock of Ages.” Supported every step of the way by an awesome onstage rock band, this musical features samplings from a who’s-who of 1980s-era big-hair rock legends (pretty much everyone from Bon Jovi to Pat Benatar). Nominated in 2009 for a Best Musical Tony, the show is an unapologetic send-up of what many of us Generation Xers consider to be the golden era of MTV. This production may, in fact, shock and awe you back a few decades to when all you needed to get by was a bit of hairspray.

The plot, for what it’s worth, is like the Journey song catalog brought to life with “Rent” thrown in for good measure. City boy Drew (Kieran McCabe), raised, of course, in south Detroit, meets fresh-off-the-bus Kansas girl Sherrie (Taylor DiTola). Both chase their dreams in an L.A. nightclub while also falling in love. But, as you well know, every rose has its thorn, which here includes a greedy German developer trying to swallow up the beloved club. Helping to push things along is an impish narrator whose utter disrespect for the fourth wall keeps the action light. If I am being honest, the plot is little more than a thin clothesline designed to hold up a never-ending medley of rock anthems. The production should rightfully be judged by whether or not it rocks you to your core. And to that end, the production very much succeeds. Heck, the concession stand even sells battery-operated lighters.

Director-co-choreographer Amber Mak scores big with a full-throttle embrace of the source material. The fog machines are smoking, short-shorts are shorter than you might think possible and the hair is indeed big. More impressive, however, is how the very talented cast impressively wraps themselves around all these well-choregraphed numbers. DiTola and McCabe lead the way with impressive vocals as well as an organic simplicity that allows you to get sucked in by the predictable plot. Shea Coffman as the narrator and loyal nightclub worker brings a lot of joy into his roles with Karl Hamilton (nightclub owner Dennis) a steady presence throughout the production. Standout performances include the incredibly talented Melody A. Betts whose big-time vocals can barely be contained on stage.

For those, like this critic, who lived the 1980s, the production will be all the fun of a high-school reunion without the awkwardness of seeing your ex-girlfriend. Younger audience members might initially find it all a bit too ironic to embrace. That is until the spirit of rock takes hold. Then they, too, will be on their feet at curtain call singing the words to “Don’t Stop Believing.”