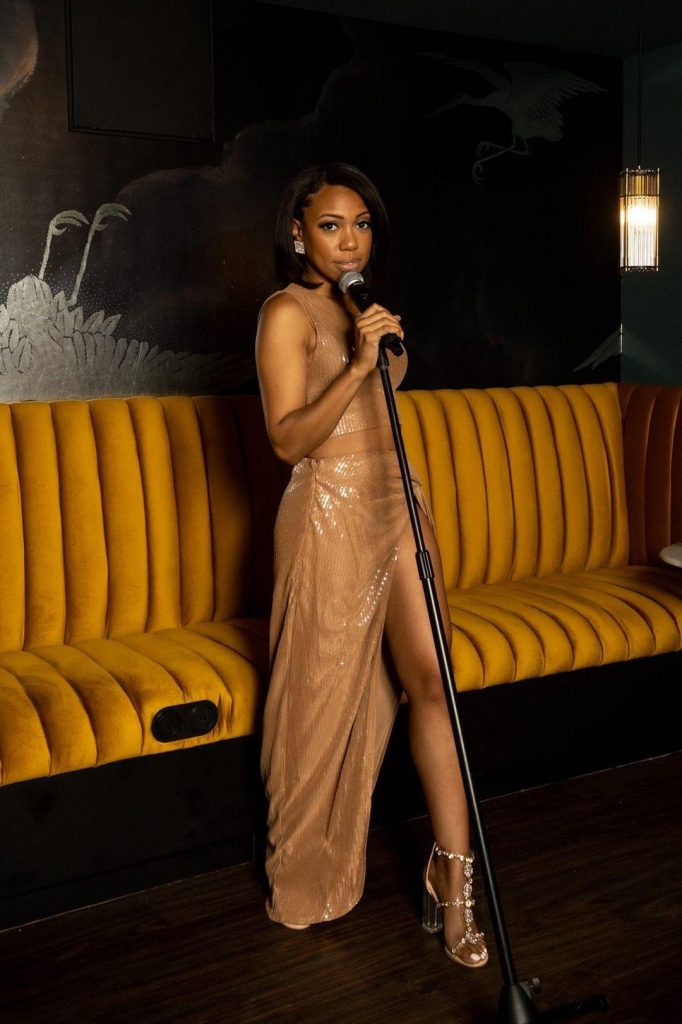 “I’m looking forward to being back in Chicago. Hands down Chicago is my favorite city,” says comedian and actress Brandi Denise, who now lives in L.A. but will be in Chicago this week to headline five shows over three nights (May 6-8) at The Comedy Bar, with plans to record the sets for an album. “I always feel just so much love and support there. I always feel good when I go to Chicago.”

And Comedy Bar specifically has a special place in her heart. “Comedy Bar is the place I used to just get on stage and do twenty minutes a night,” she says. “So I wanted to come back and be like, ‘Oh I’m back. This is nice. I remember this place. This is fun.’”

Denise, a petite and energetic stand-up comic best known for her recurring role as Quanisha on BET’s “Games People Play,” hasn’t done a show in Chicago since December 2019, but was a regular across all of Chicago’s stages—whether she was performing improv, sketch or stand-up—from the moment she moved to Chicago in 2011 until she relocated to Los Angeles in 2017. “Just pounding the pavement,” says Denise. “Like five, six mics a night.”

Denise moved to Chicago after performing stand-up in Florida for a year and realizing she was committed to comedy and had to take the next step in her career. “I remember reading that Conan O’Brien had said Chicago is where people get their comedy wings,” says Denise. “So I was like, ‘Let me go to Chicago and get my reps in.’” She started as an intern at Second City (“kind of giving these people juice and grapes and shit”) where she took classes before getting back into stand-up by hitting the stage at Jokes and Notes (the iconic club that closed in 2016).

“I got on stage and I bombed so bad,” she recalls. “And it was really because I hadn’t done a lot of urban rooms.” But she knew if she could get good in that room she could be good anywhere, so she kept coming back. “I remember one of the comics being like, ‘You’re tough,’” Denise says. “And I was like, ‘Why?’ And he was like, ‘You keep coming up here and you keep bombing and you never leave.’” Her tenacity and determination served her well and she kept going up until she got good, eventually featuring at Jokes and Notes, and then at Laugh Factory. Soon she was going on the road with notable comics like Damon Williams.

After being inspired by her friend and fellow Chicago comic Just Nesh, Denise quit her job as a social worker in 2016 to pursue comedy full time. A year later she relocated to L.A. and applied the same level of dedication and tactical planning to moving her career forward there. “My first six months I was up at the Improv, up at the Laugh Factory,” she says. “And once you get there and you’re funny, then you’re in. Word-of-mouth travels.” That’s when stand-up started helping her land acting gigs.

Denise says even though she’s booked dramatic roles, mostly, her stand-up has given her a leg up on the competition. “I always send two tapes,” she says. “I send what they write and I send what I want to say. And I think what I want to say is what gets me booked because they’re like, ‘We could not stop laughing.’” Producers have told her they watched her stand-up and loved it. “It’s a little drizzle on it,” she says. “Because if you have ten actresses and you’re like, ‘Okay, two of these fit what we’re looking for, but one we just watched do a ten-minute set and she’s fucking hilarious. So even if she drops all her lines we know she can still carry the part that she needs to carry.’”

Despite her acting successes she still considers herself a stand-up who also acts, and not the other way around. In December she went on the road with Lil Rel, who she’s known for over a decade and worked with briefly in Chicago, and she performed with Chris Redd in San Francisco earlier this year. (Redd also tapped her for a role in his Peacock show “Bust Down.”)

“It’s cool because now they view me as their peer and not so much as little Brandi,” she says. “Because now I’m starting to hit my own strides and my own gains in my own different way.” She’s got more stand-up gigs and festival appearances lined up in 2022 and is now ready to see what comedy has in store for her next.

And what about Quanisha? Will “Games People Play” be renewed for a third season? “Baby, you, me, my manager and agent, we all want to know,” Denise says, laughing. But if it’s not she’ll be ready for the next thing: “I feel like whatever happens, it won’t be wrong,” she says. Whatever happens starts with an album recording in Chicago.