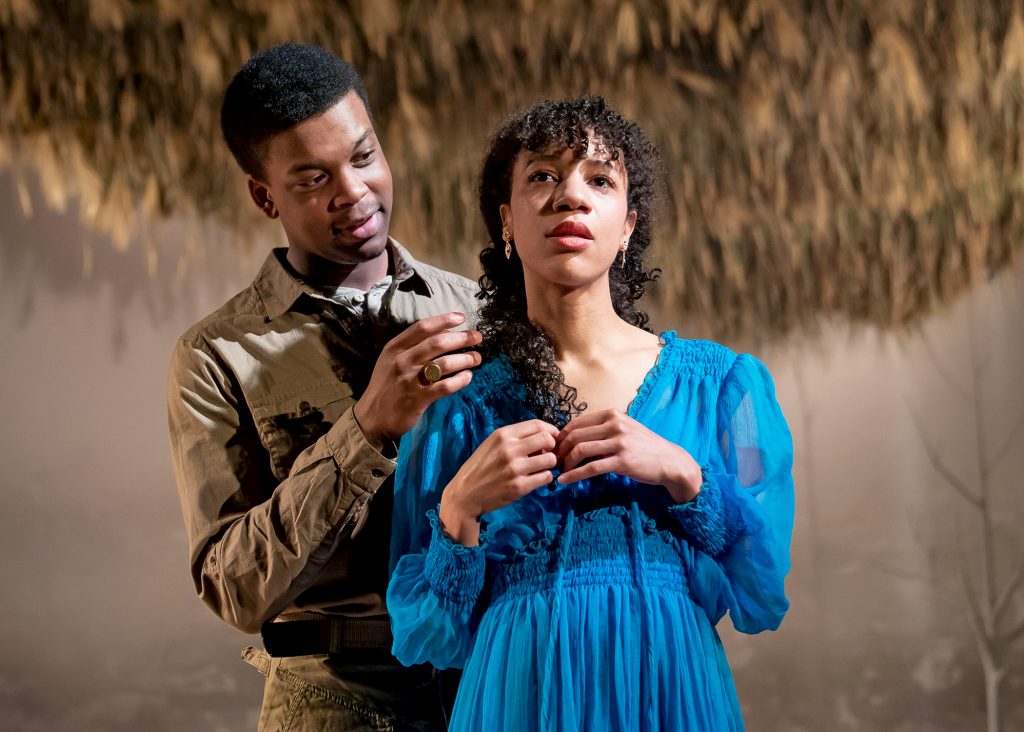 The late-sixteenth century saw a philosophical shift away from God as the prime mover of human hearts toward centering human beings as the entrepreneurs of their fate. And no one investigated this shift quite like Shakespeare. He raised questions on agency, motivation and how much control we truly command over our lives while offering no clear answers. His later works attribute musings on self-will to his villains, yet his so-called “problem plays,” a trio of works written in the early 1600s, challenge audiences by attributing those ideas to his protagonists. Why does it feel acceptable for a sympathetic person to use Machiavellian tactics to secure a happy ending? Perhaps in this case we feel the ends justify the means. Or in other words, all’s well that ends well.

Shakespeare’s comedies center on uniting unlikely couples, yet “All’s Well” has one of the most pessimistically one-sided courtships in the canon. Helena (Alejandra Escalante), a low-born ward of the Countess of Roussillon (Ora Jones) worships Bertram (Dante Jemmott), the countess’ son, from head to foot but can’t make him love her back. Nobody’s launching a thousand ships on this Helen’s behalf. Bertram feels nothing for her and soon leaves to serve the King of France (Francis Guinan), who’s dying of a deadly fistula. Since Helena can’t woo Bertram, she plans to cure the king. When she does so miraculously, she requests to be married to Bertram as her reward. But Bertram rejects her in public and runs away to join the army and find love with his Italian sweetheart, Diana (Emma Ladji). This spurs Helena on to take more drastic measures to bring about her happy ending.

Director Shana Cooper appears to acknowledge the play’s relatively shallow footprint in the minds of casual theatergoers by using a stripped-back approach to the production, save for a few spectacular sequences, and positions the story as the main attraction. The costuming evokes late nineteenth- or early twentieth-century European dress. Only necessary props and set dressing occasionally populate the open stage. How the cast handles the text is the closest I’ve heard Shakespeare sound like conversational speech. It’s all in service of simple, clear, direct storytelling. There’s still spectacle on display, with the open concept allowing for highly expressive moments through Stephanie Martinez’s energetic choreography.

This production finds the divide between youth and age as the driving force behind the character’s decisions. The older characters ache to be young again while their children ache to grow up, perhaps too quickly. Alejandra Escalante brings innocence, youth and energy to Helena; she has the impulsiveness of an adolescent driven by emotions she doesn’t entirely understand. While Helena asserts that “Our remedies oft in ourselves do lie/ Which we ascribe to heaven,” her quixotic attraction to Bertram shows how any self-authorship we have conflicts with our more unconscious desires. When she resorts to dubious actions, Alejandra helps us understand that Helena isn’t motivated by malice but blind self-confidence. Dante Jemmott follows suit by playing into Bertram’s immaturity to great effect, putting his naturally baby-faced features to work. His unwillingness to like Helena, let alone love her, is justified not by any personal feelings but more like a teenager who just doesn’t want to be told what to do.

Serving not just as Bertram’s follower but as his darker reflection is Parolles (Marc Bedard). Parolles is a transparent weasel to everyone else but Bertram, which reflects more on the young lad than Parolles. In a play concerned with the divide between youth and age, Parolles is desperate to be associated with young people, expressed through what looks like a Paolo Gucci-inspired wardrobe, among other surprises. He’s a delightful moron incapable of getting his words straight or having a comeback at hand. With his name ironically translating as “speech,” Marc Bedard capitalizes on his constant loss for words.

In contrast with the high-stakes romantic drama is the Countess of Roussillon who is grieving the recent death of her husband. To cope with her grief and feel young again, the countess flirts with the wise clown Lavatch (Elizabeth Ledo), who’s all too eager to provide. They play their scenes full of delightful mature sensuality, full of foreplay for its own sake. Both parties can make each other feel desirable while knowing it’s all just play. If only our central lovers could be so self-aware.

The stripped-back production serves the story, but stumbles when it tries to support more overtly fantastical moments. Particularly, the sequence where Helena cures the King of France is presented as a supernatural healing ritual, bolstered by a magic that recalls Teller’s “Macbeth” production. While this moment makes sense on a dramaturgical level (sixteenth-century doctors were widely seen as more magical than scientific), the grounded world of the play could have provided this flight of fancy more runway.

The climax of “All’s Well” earns its problem play status, yet this production seems to treat it perhaps too lightly in order for the play to end happily. I won’t argue that the production ought to have depicted the moment I allude to (given this is a lesser-known work, it seems reasonable to avoid spoilers). But given the ethical queasiness of Helena’s actions, skirting so quickly past it in the final scene feels like an indirect endorsement. The ends really did justify the means. If we’re meant to question how we justify sympathetic people doing horrible things for good reasons, as the play seems to indicate, it seems odd to put the audience’s comfort first.