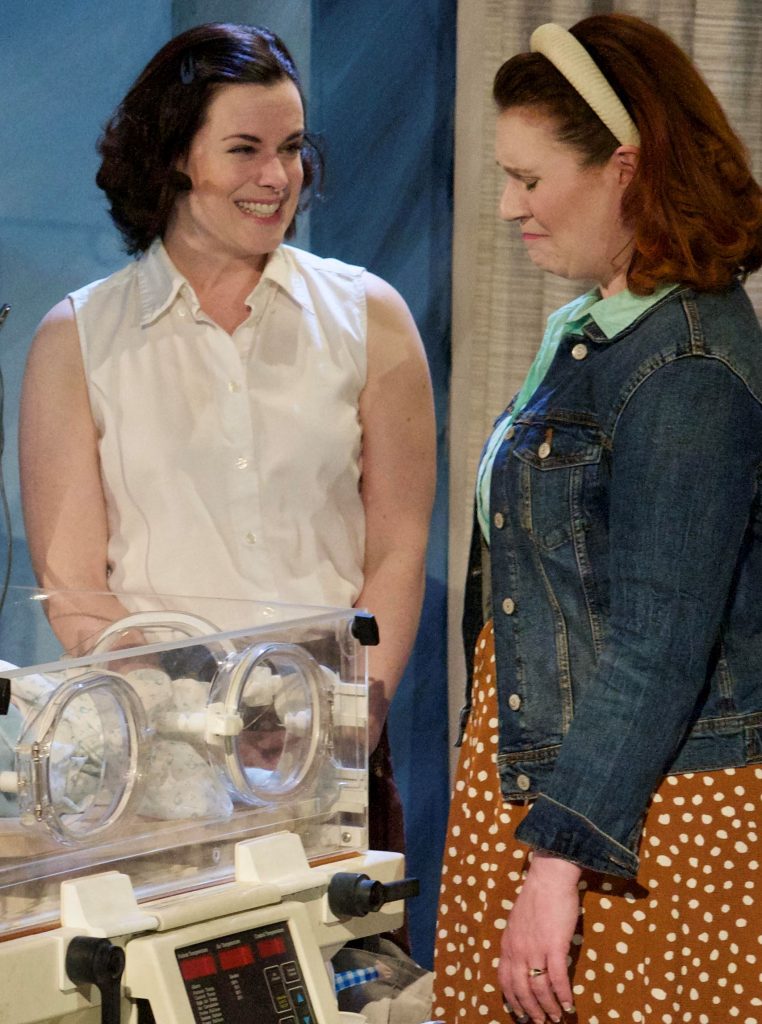 City Lit Theater’s production of “Emma’s Child,” written by Kristine Thatcher, struggles to figure out how to tell its story. The plot is straightforward: Married couple Jean and Henry (Kat Evans and James Sparling) plan to adopt the child of an underprivileged teenager, Emma (Katie MacLauchlan), but they rescind when the child, Robin, is born with severe disabilities. When Emma leaves Robin behind at the hospital, Jean returns to care for him out of guilt, breaking all kinds of hospital ordinances to do so. She falls in love with Robin and wants to adopt him again, which causes a rift in her marriage. This is a strong foundation for drama, but the play’s writing and directing muddy the waters in execution.

Midway through act one, for example, Jean is jazzed to learn about experimental surgeries that might make Robin “normal,” as she puts it. “He could be normal!” In a script full of odd lines, this one hits different. It’s not one of many non sequiturs like the five-minute discussion on birch trees that opens act two with less of a bang and more of a “huh?”; nor is it a self-conscious bit of farce like an early misunderstanding over the word “fire alarm” that’s missing only a laugh track and a point. Nothing like that. Throughout act one, Jean learns to love Robin while knowing she might be his caretaker for the rest of his life, and let go of the platonic ideal family she wanted. But this sudden “He could be normal!” jams a stick in the wheel. It flies in the face of her stated intentions to accept him totally. So is the play raising a question about Jean’s motivations, i.e. whether she loves Robin unconditionally or out of hope she could make him an ideal son? Is this much-ado even the play’s intent? The play’s feather-light approach to its characters and tone, mixed with unfocused writing, leaves this and similar moments of cognitive dissonance coming across as unintentional.

If the script is ambivalent or ambiguous, then we hope Terry McCabe’s direction can help clarify. But the directing remains firmly on the surface, which remains a habit in this play: translating the text into stage action as plainly as possible. Which means uneven dialogue is left really uneven, and some moments, such as sudden nonlinear time jumps among a few scenes (it’s kind-of sort-of a memory play), are handled so matter-of-factly they’re confusing.

The characters in “Emma’s Child” are underserved by this superficial approach. The cast falls into “park-n-bark” staging, with the dialogue’s frequent tangents left unsupported by subtext that could help these moments illuminate the characters or story. Jean, for all her good intentions, comes off as a proto-anti-vaxxer who puts her newfound parental intuition above the other doctors’ advice in favor of her own research. Emma, in her one short scene, appears so blasé about leaving her vulnerable newborn that she may as well be saying goodbye to some unwanted groceries. Could this effect work as a dark and bleakly funny interpretation? Perhaps, if the decisions about staging came off as intentional. But without meaningfully integrating these rough edges, it’s hard to say if Emma is meant to be unsympathetic or if it’s just an accident.

“Emma’s Child” suffers from ambivalent direction trickling into an ambivalent text, leaving a play with an uncertain purpose beyond grabbing easy sympathy with a story about a dying child. This cast deserves better, and this text, even with its flaws, could be served better. Based on how uncommitted the direction feels, plus the amount of fluff that could be cut, perhaps the director could be assisted by a collaborator to help dig into the script, like a dramaturg.