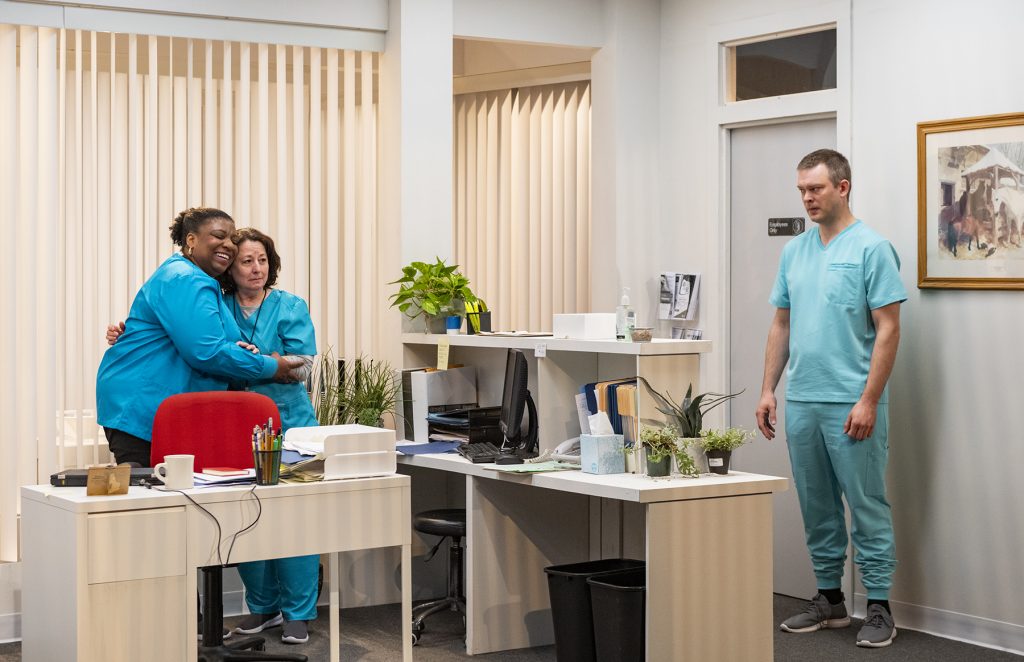 “Rasheeda Speaking,” the 2014 play written by the late Joel Drake Johnson and revived by Shattered Globe, is a minefield of a drama, focusing on how the macro issues of race, class and gender affect the micro world of workplace relationships. Well-cast and energetically acted, edgily relevant and possessing moments of raw power, this is a play I’d very much like to like. But in the end, its thematic complexity boils down to moral confusion, and the takeaway is a sour and nihilistic one, a sense that America’s racial quandary is a hopeless zero-sum game which we’re all doomed to lose.

The “Rasheeda” of the title is a nonexistent character, or rather a mythic one: she is—follow me here—the embodiment of what Black protagonist Jaclyn perceives as the racist perception of her and others like her by the white male yuppies on the bus she takes to work every day. “Rasheeda” is the degrading identity trap that Jaclyn, who works as an assistant in a surgical practice in an upscale Chicago neighborhood, is desperate to avoid. But in the tightly controlled, mostly white milieu where she works, the pressure to become “Rasheeda”—an updated Aunt Jemima type, who reassures white folks with her smiling submissiveness—is heavy. These onerous, unspoken expectations bring the potential for serious and even violent conflict into Jaclyn’s workplace, which she shares with the smarmy Dr. Williams, who thinks Jaclyn (whom he repeatedly calls “Jacky”) “doesn’t fit in,” and Ileen, the white office manager who worships her boss and reluctantly becomes the agent of his scheme to get rid of her fellow employee.

What is Jaclyn’s crime? Not incompetence—she’s clearly capable and reliable, if occasionally a bit short on courtesy. But there’s something about this strong, expressive Black woman that makes the doctor uncomfortable. “She seems unhappy,” he tells Ileen, whom he wants to document Jaclyn’s every move. “I don’t think she likes me.”

But it’s the shifty, image-obsessed doctor, ensconced in his pristine office (beautifully executed by set designer Scott Penner), who doesn’t like Jaclyn, sensing that she’s not as manipulable as his adoring office manager. In Jaclyn’s insistence on being treated as a full-fledged human being, Dr. Williams senses “anger” and “attitude.” And in the doctor’s refusal to be himself with her, Jaclyn discerns not just typical M.D. condescension, but deep-down, unacknowledged racism.

Director AmBer Montgomery extracts all the nuance and implication of the setup, as Jaclyn returns from a sick leave due to “toxic fumes” in the office, only to discover that something has changed, and the doctor and Ileen—whom she once considered a friend—seem to be joined in a sinister, secret pact. Deanna Reed-Foster is superb as Jaclyn, skillfully managing the various levels and shadings of her character, from affectionate co-worker to ironic “Rasheeda” figure to conscience-tweaking truthteller. As Jaclyn’s frenemy Ileen, Daria Harper captures the awkwardness of her position, where to be loyal to her boss means betraying her colleague. Drew Schad does well by his villainous role as Dr. Williams, getting across the insecurity and ruthless opportunism behind the taut smile and professional mien. And Barbara Roeder Harris is convincing as the aging, naïve patient whose presence in the office brings the simmering tensions to a boil.

The play could be a compelling look at how opposing stereotypes reinforce each other, congealing into tribalism and hatred. But the show loses its way, becoming heavy, pushy and muddled.

A major problem is the characterization of Jaclyn. She’s at least as much bully as victim, blatantly gaslighting the more vulnerable Ileen, as well as subjecting her to a barrage of verbal barbs, fibs and sheer cruelty. At one point, Jaclyn reduces her co-worker to tears, then giggles at her misery, then lies about the giggling… and later describes all of her jabs as mere clowning, somehow more benign than the micro-aggressions of the doctor. All of the characters become flatter, meaner and less human over the course of the hour-and-forty-minute drama (presented sans intermission), as it moves toward its ambiguous and anticlimactic, but distinctly grim, conclusion.

I admit I was hoping that the two women, both victimized in different ways by their devious boss, would overcome their distrust and become allies against the doctor, who has pitted them against each other. But in the world of this play, racism is so entrenched that there are no allies, only antagonists.

There are many intense dramatic moments in “Rasheeda Speaking,” and a few sharp insights amid the ever-spiraling hostility. But what’s missing is an awareness that, when all’s said and done, we’re all stuck in this thing together. A dollop of compassion and a hint of forgiveness come in handy, in life and in art. (Hugh Iglarsh)