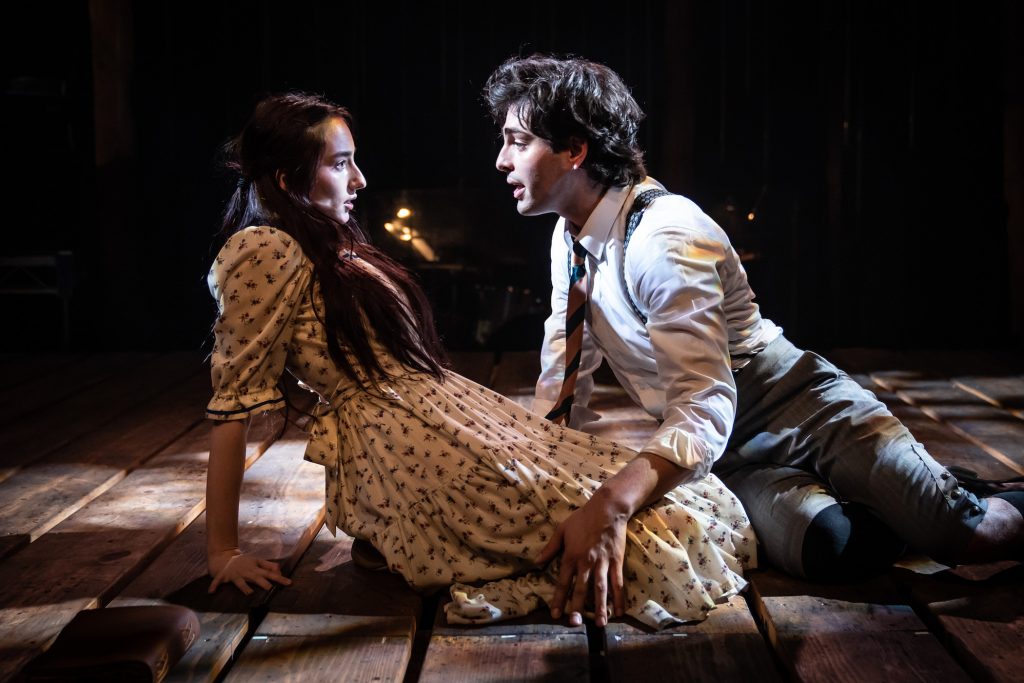 “Spring Awakening,” the multiple Tony Award winner that hit Broadway in 2006 is often misdescribed as a “coming-of-age musical.” The modern show adapts and, surprisingly, sanitizes its once-scandalous namesake nineteenth-century German source material, a play by Frank Wedekind. The original is rife with the darkest stuff, exuding so much frustrated Germanic longing that Goethe’s “The Sorrows of Young Werther” is a rom-com by comparison. There’s a rape of a fourteen-year-old (tidied up in the musical as a consensual roll in the hay), madness, suicide, parental sexual abuse and ostracization. And it’s all without a whiff of justice for the young and just-past-innocent. Neither the original play nor the musical offer a coming of age as much as they do a snuffing of age. The musical features an early 2000s indie rock score and includes some punkish tunes to bang heads to. Nevertheless, it is as somber as any musical I’ve seen. To the great credit of director-choreographer Brenda Didier, the actors and the production’s terrific pit band, this show, which is so joyless on the page, nevertheless offers joys on the stage. And, for those, like many teens (I could once count myself in that number), who find catharsis and perhaps gothic glamor in the suffering of fictive teens, this is a show to run to… But perhaps without one’s parents.

The young Wendla opens the show with a penetrating solo, the haunting, cryptic “Momma Who Bore Me.” Wendla, like all the young characters in the show, is barely pubescent and struggling to understand her feelings. Played with embracingly open sensitivity and beautifully sung by Maya Lou Hlava, Wendla sings alone onstage, coursing her hands sensually over her changing body. Without understanding the most basic facts of life, Wendla intuits that the bodily facts of her changing self somehow relate to pregnancy. The lyrics to the song are obscure, but Hlava is one of the most affecting players in the production and her character’s sadness and fury at the silence of adults who refuse to enlighten her is clear. It also sets up the moral universe, and the moralizing adults, that the other young characters will suffer.

Action moves to a strict all-boy Latin classroom in a local gymnasium, the kind of academic college prep school that was the gateway to higher education and the German professional class. One of the boys is the anxious Moritz, played in a bravura performance by the lithely animated Quinn Kelch, who often looks, moves and sounds as if he were in an anime mad scene. Moritz is the whipping boy of the always-cross schoolmaster. The master is one of several adults in the play cast from the same cold, haughty hypocritical mold. They are all played by the same two actors and it’s sometimes hard to know which adult they’re playing. When Moritz stumbles on a conjugation while reciting the opening of “The Aeneid,” the master belittles him. To Moritz’s rescue comes another student, the handsome, self-assured Melchior, played coolly by Jack DeCesare. Melchior makes the case that his friend’s mistake was reasonable and supports it with an uncanny erudition that references other classical texts. The teacher harrumphs and moves on, but, humiliated, he also resolves to drum Moritz out of the school. Friendship, sex and the duplicity of adults eventually bind the fates of Wendla, Melchior and Mortiz to tragic effect.

These three main characters are joined by an energetic cast that is also a compelling and crackerjack vocal ensemble. This isn’t a musical where the songs move the action. Most are reiterative of what’s been or will be played straight on stage and they do little to advance our understanding of the characters. In addition, the lyrics are often so inscrutable that it’s left to the choreography to link the songs to the action. If the songs contributed more, the characters in “Spring Awakening” might have been less archetypal or more three-dimensional. The cast, the musicians and the production team have made the most of what they were given and this show will likely resonate with the age group whose pains it portrays.

“Spring Awakening” at Porchlight Music Theatre at The Ruth Page Center for the Arts, 1016 North Dearborn. Tickets start at $25, (773)777-9884 or porchlightmusictheatre.org. Through June 2