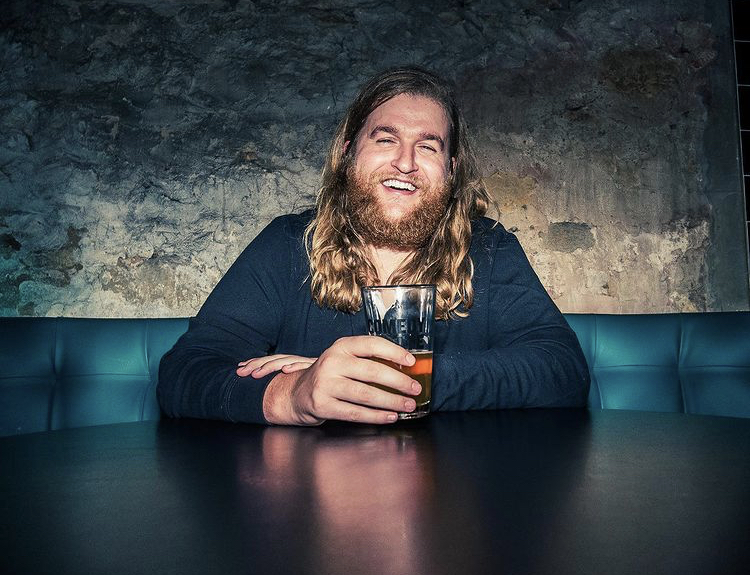 “I’m not gonna be doing anything that’s all that important, I’ll say that much,” says comedian Chris Higgins when asked what audiences can expect from his weekend of headlining shows at The Comedy Bar in Chicago (five shows over three nights, May 20-22). “I wanna have fun up there, goof around… Let’s just have a good time. That’s what they can expect. I’m not gonna make anybody question anything. You’re gonna have some dumb, fun times, that’s it.”

Higgins has a look—big, bearded—and a voice—deep, gravelly—that belies his goofily friendly persona, an image he self-describes on the first track of his debut album “Good Boy” (released in January as The Comedy Bar’s first venture into the world of comedy albums and available on all streaming services) as “if a golden retriever became a real boy.” And like a golden retriever, he’s hard not to like.

He moved to Chicago in 2015—by way of St. Petersburg, Florida by way of Boulder, Colorado—to pursue comedy. Originally interested in improv, his attention quickly turned to stand-up once he started hitting Chicago stages. “I had done stand-up before then, but it’s hard to say I had started doing stand-up before I moved to Chicago,” Higgins says, expressing his admiration for the next-levelness of the Chicago scene. “I think I thought I started, but I quickly learned what actually doing comedy was when I moved to Chicago.”

As his love for stand-up grew, improv fell by the wayside. “In improv I never really got the kicks from setting somebody up for a great laugh,” says Higgins. “I always wanted to get the laugh and that’s why improv just didn’t work out for me, because I was just a fucking absolute whore up there.” Seven years after moving to Chicago his whoredom has been on display on nearly every stage in the city. He’s a cast member at the celebrated Lincoln Lodge and even headlined the historic Zanies in Old Town in March. (“I don’t really have a vision board but if I did it would have been on there,” says Higgins. “Envisioning my vision board, it was on there.”)

And his credits are consistently expanding. He was recently featured on the show “Tumbleweeds with Killer Mike,” a show on VICE TV that Higgins compares to Anthony Bourdain, but for marijuana. “Bourdain would meet up with the big chefs or food critics of a town,” he says. “Killer Mike was meeting up with comedians who smoked a lot of pot.” And he’s well-known as the God half of the “God & Angel” duo on Instagram, a hilariously silly series of sketches he co-stars in with his brother Charlie that features a dizzying amount of Chicago comedy talent in guest spots centered around God and his angel sidekick discussing aspects of humanity, history and the creation of the cosmos.

But this week he’s looking forward to being one of the first comics to headline the new Comedy Bar stage in its new space off of the Magnificent Mile. “It’s a lower ceiling, it’s a little tighter of a room,” he says of the remodel. “I don’t think the capacity is that much lower but you can really cram people in there and get ‘em close to a nice, low stage which is what comedy should feel like.” Check out the new Comedy Bar space this weekend and let this good boy make you laugh.