Director Max Truax’s production of Heiner Müller’s “Medea Material” takes the text, as translated and adapted by Sarah Tolan-Mee, and uses it as the basis for the ensemble’s explorations into images and language of colonization, war and violence. Here the language serves as texture more than text, sensation over sense, with unsettling associations sublimating into a dark atmosphere. Müller’s original script is only one element in a thicket of images and cut-up poetry evoking wartimes of the past as context for the present violence. If you’re unfamiliar with the Medea myth and crave a crumb of narrative as a theatergoer, you may have little to grasp while watching “Medea Material,” so a working understanding of the myth is necessary going in.

The gist of the story is that Medea was a sorcerer from Colchis (present-day country of Georgia) who, as it is typically told, fell in love with the Greek adventurer Jason while he was in Colchis to find the golden fleece. She offered her magical aid to him if he would bring her back to Corinth and marry her. After she holds his hand through the process, Jason captures the golden fleece, and they sail away to Corinth to marry and have children—though not before Medea is forced to kill her brother to escape. Years later, Jason decides to marry another woman and have Medea exiled. In revenge, Medea murders not only Jason’s prospective bride but her own two children.

The play references the myth’s overarching plot points, yet the events in the play occur as if refracted by the psyche of someone torn up by grief, guilt, anger and trauma. Multiple actors portray Medea and Jason to embody this: Venice Averyheart, Alexis DawTyne, Catrina Evans, Emily Lotspeich, Laura Nelson and Emily Nichelson as Medea; Miguel Long, Steven Schaeffer and Keith Surney as Jason. It’s not as simple as the cast playing different sides of these characters—no lineup of guilty Medea, angry Medea, posh Medea, sporty Medea, and so on—but more subtle interpretations as brought out through each actor’s persona. 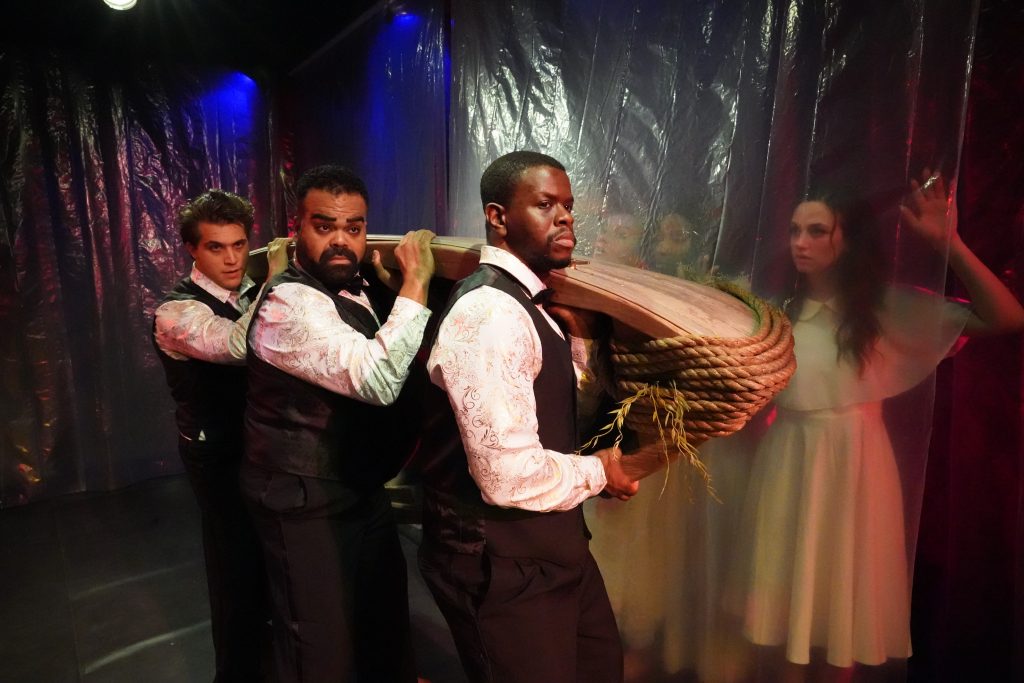 In “Medea Material,” the myth is viewed through a colonialist perspective: Jason is a so-called adventurer plundering treasure in a foreign country with a band of mercenaries while reframing Medea’s role in the myth as unwillingly complicit. She may have helped Jason and married him, but the images of bloodshed at the play’s start and Medea’s refrain, “You owe me a brother,” throws into doubt why and how she gave her help. This Medea is a survivor, and this Jason is a perpetrator of violence. One struggles to find agency in a world that won’t stop acting upon them, and the other assumes cruel ease in exacting his will on others. In one of their rare dialogues, Medea tells Jason that they want to die. With a blank smile, Jason responds that he’s heard that before. Occasionally haunting the stage are masked actors dressed in tuxedos and lamb heads, evoking associations between Medea’s doomed children and the plundered golden fleece. An act of colonizer violence leads to even more violence.

Cloudy plastic sheets surround the stage, which creates an endless array of effects. As the play begins with the sounds of ocean waves, the actors lay across a wooden rowboat as the rippling plastic blends into the soundscape. Their opacity evokes hallucinations, mirrors and ghosts. Plastic covering lying bodies creates gruesome connotations. Michael Griggs’ minimalist concept provides endless mileage, and its use culminates in one of the most truly unnerving climaxes of the year.

The ensemble’s churning choreography provides a series of setpieces linked by Medea’s story, yet exploring psychological shadows underneath rather than illustrate narrative, even in the text’s rare moments of dialogue. It allows for striking images and gorgeous movement, especially in a dance-hall style sequence where pairs of Jasons and Medeas multiply as the sequence repeats and repeats. With each moment existing in its own world, it occasionally leads to—as my dancer companion put it—a feeling of all duration, no time. Yet the play undeniably, effectively, creates viscerally uncomfortable and beautiful sensations in the audience to turn myth into a waking dream.