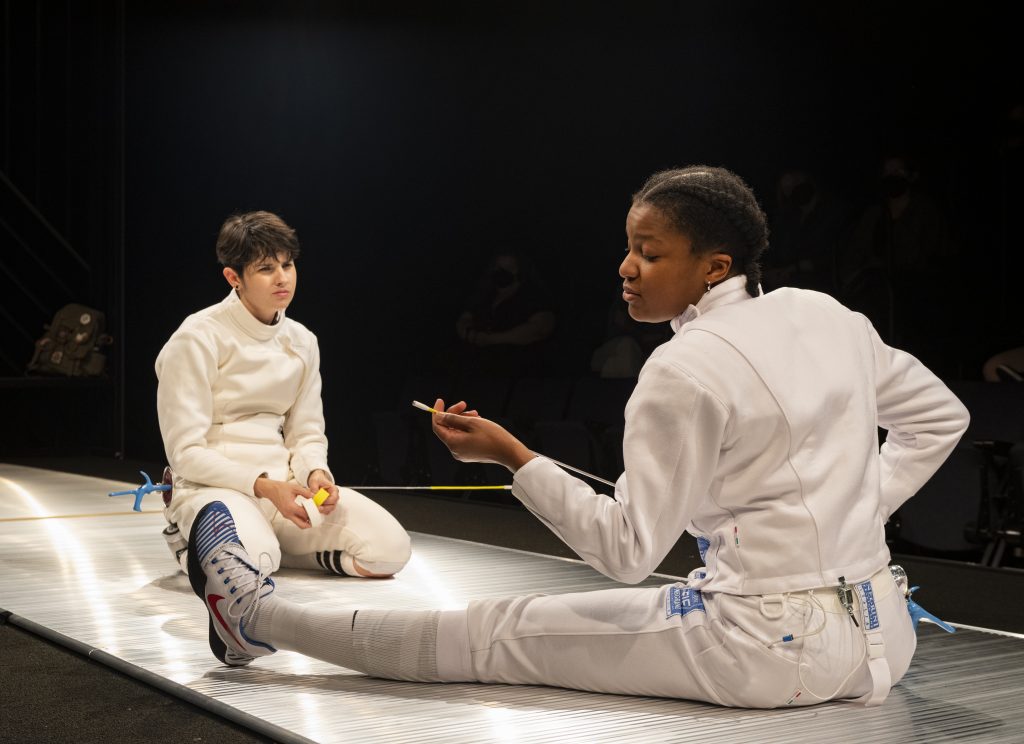 The title character is played with taut energy and wit that’s both bruised and barbed by Mary Tilden. Athena is an outwardly cocky, bossy and brazen Manhattan kid. She’s dubbed herself after the goddess and won’t reveal her real name because, she feels, her real name would dilute her mystique and power. She trains hard so she can rise to the top rank of local fencers. She relishes winning. Athena flings her arms in the air and crows when she scores on opponents. Her mother has departed. Her father, with whom she lives, is disengaged but nonetheless spends on her expensive training despite his depleting—so he says—circumstance. Athena drinks gin straight from a plastic water bottle. She’s largely alone.

One night, Mary Wallace, a kind, self-aware lover of marine biology, played disarmingly and relatably by Aja Singletary, comes into the training room where Athena practices. They spar and find they are evenly matched. Both believe their differences can make the other a better fencer. They negotiate how to train together, agreeing not to become such good friends that they restrain themselves when competing against each other. Mary Wallace takes persuading. She predicts that such intense preparation will lead to friendship and undermine them both in practice and at tournaments. Athena talks her out of it. Of course, Mary Wallace is right. Their relationship unfolds in part through the physicality of their sport.

There’s a lot of fencing, all on a stage set designed to maximize the drama of the sport. There’s also a lot of fencing gear, which, like armor in a museum, is also fun to see. At one point the two debate the relative merits of the chest guards. Athena’s contour to her breasts, which Mary Wallace mocks, “The plastic boobs just slow you down,” she says. “They just guide someone’s blade right to a hit, like having bumpers up in bowling.” 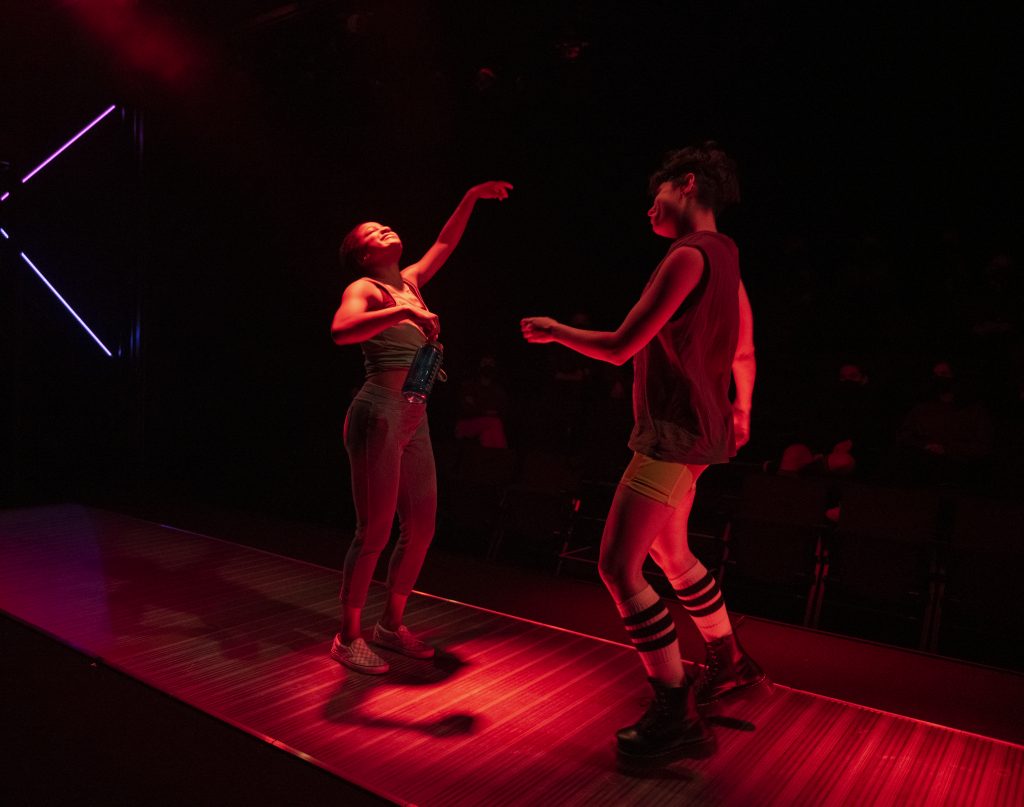 En garde with blades leads to off guard in talk. The two share their many dreams, anxieties and spill on their sexual adventures and fantasies. They sneak any with fake IDs and go drinking and dancing. The two actresses each find tones that mirror those of smart teens. Tilden has mastered the knowing, slightly whiny bratty sing-song of a New York private school kid who the world alternatively massively bores or insatiably fascinates. Singletary has the sincerity of a student who wants to do well to please her family and realize her academic goals. The dialogue is crisp and fast-paced. Yet, the script laces the dialogue with philosophic and cultural references that sometimes seem starkly anomalous even for the most intellectual high schoolers. At one point Mary Wallace observes, “ I’m a postmodernist. I don’t think anything is new. Especially not moves in a five-hundred-year-old sport.”

At times, the precocious dialogue is a reminder that the actors are more mature than the parts they play. Many of the show’s witty lines deserve laughs and one wonders that if the actors were closer in age to their parts whether the lines might have scored. It would be fun to see actual teens in the parts. Then again, I saw an early Sunday evening performance where the median age of the audience was closer to seventy-one than to seventeen. (Full disclosure: I push the median way north, too.) An audience chock full of teens and parents of teens—which this show fully deserves—would almost certainly offer a more lively response.

Not to be overlooked is the visually arresting set by Arnel Sancianco, which focuses both the action and dialogue on a narrow strip of carpet within a frame of colored light—designed by Paul Toben—that dramatically punctuates the fencing. Director Jessica Fisch and choreographers David Blixt and Christian Kelly-Sordelet keep the fight action graceful and suspenseful, and create some Karate Kid-worthy battle scenes. The play runs eighty minutes.