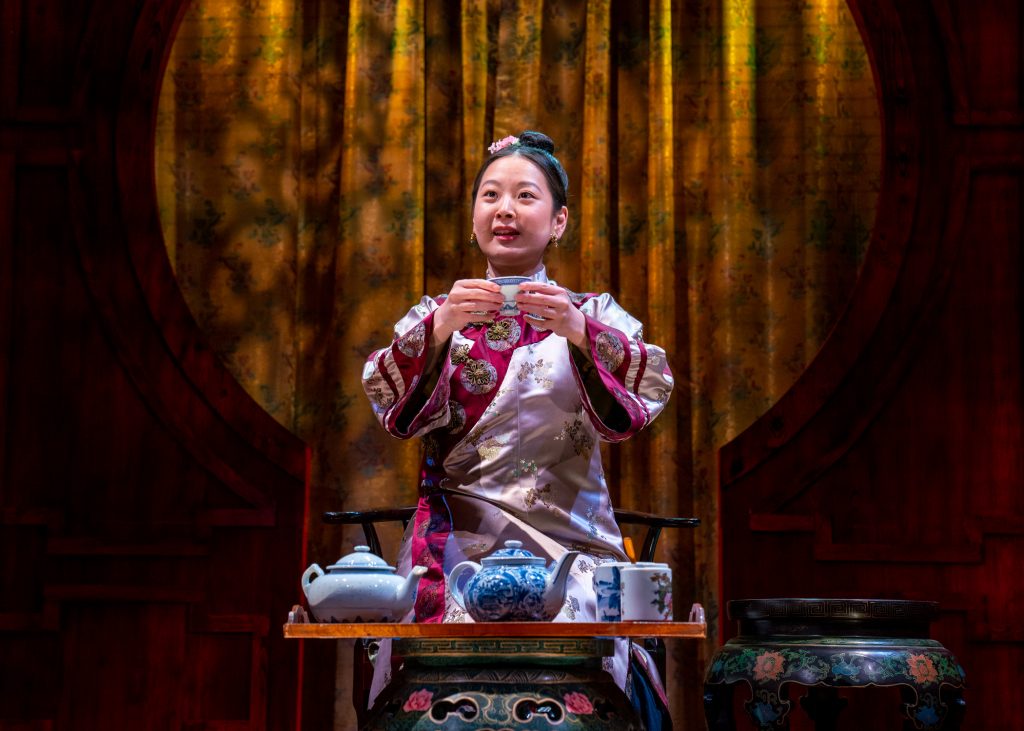 Lloyd Suh’s “The Chinese Lady” features two actors, but nearly the whole show belongs to the title character. We never learn her real name. She is called Afong Moy by the white men who presented her in a “museum” beginning in the mid-nineteenth century. Afong Moy existed, but there’s no record of her actual name or family and there are no Chinese characters that correspond naturally to Afong Moy in her native Cantonese. Like much of the “Chinese life” she was used to represent, her name was an American construction based on flimsy (and probably lazy) understanding of lives and things Chinese. One of the ironies of the play is that Suh also concocts the Chinese lady’s story, but, in one of the poignant meta strains of the show, the character tells us that it is largely a modern invention by the present show’s creators, and reminds us of it several times throughout the production.

In the role of the conjured Afong Moy, Mi Kang delivers an inviting, bewitching and troubling character. It’s a brilliant, perfect performance. This is a play that has virtually no action. It begins in 1834 at a time when her American presenters were looking for ways to attach exotic glamor to their recent imports from China, especially tea. Tea would be the engine of many ethnic displays over the next century; some, like those at the World’s Columbian Exposition, were grand, but Afong Moy’s display featured just her and a servant-translator. What her presenters didn’t count on was the profit to be had from a public hungry to see living “display” from China. Prior to Afong Moy’s arrival, P.T. Barnum obtained—dubiously, no doubt—the service of Joyce Heth, an aged, skeletal African American he displayed across the United States as the 161-year-old former nurse to George Washington. Before Barnum settled on that ruse, however, he considered marketing Heth as a “disgustingly deformed” Chinese woman with bound feet. Afong Moy’s masters had a Barnum-worthy attraction and they placed her in a “museum” in New York where admission to see her cost the equivalent of the priciest Broadway tickets today. 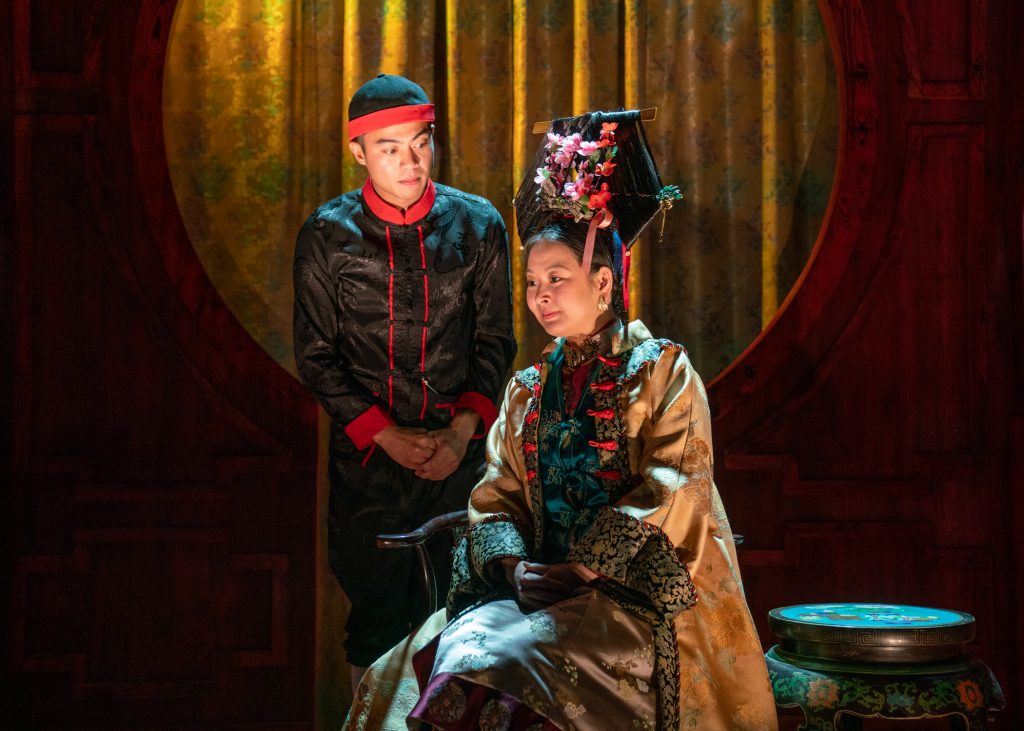 The play takes place over several decades, during which Afong Moy is captive in her role as exotic object, and paid with nothing but the same bowl of rice and simple vegetables every day. The room, an approximation of a Qing Dynasty sitting room, is a living diorama that also never changes. Aside from Afong Moy’s unvarying demonstrations of chopsticks, tea drinking and of how to walk a few shaky steps on bound feet in tiny shoes, which Mi Kang enacts with virtuosic halting tremorous agility, little happens but the passage of time. The character meets and talks to President Andrew Jackson on tour, but her heartfelt pleas for intercultural understanding are thwarted by her Chinese translator and timid manservant—played by Glenn Obrero, who well captures the heartache that overcomes his character after years of feigned indifference to his lot.

Mi Kang, who is nearing the completion of the MFA in theater at Northwestern, has a background in children’s theater. Her characterization of Afong Moy may well draw on that. It begins childlike and cheerful with a Shirley Temple-like optimism, with which she faces her adversity and strangeness of her situation. Kong gradually lets the character’s loneliness, homesickness, disillusionment and in the end, anger seep in. Along the way, she recounts the path Chinese immigrants traveled in America. She recounts the men who toiled in mines and on the building of the Transcontinental Railway. She describes the laws that excluded Chinese from entering the country, and the periodic episodes of murderous ethnic cleansing against them. Mi Kang manages to deliver it all through the outward geniality of her character who never has enough English (yes, the show is in fine, even poetic, English), or Chinese, nor meaningful human contact to shake her core naivety.

As history, the play offers much. Indirectly, it also urges some reflection on the people who witnessed Afong Moy over the decades. How did her confinement resonate with them, many themselves immigrants living in an era when unbridled capitalism routinely led to the exploitation and abuse of newcomers. The play hints at the prurient content in the gazes of the white men and women, but some of the onlookers must have felt the kind of outrage the play produces today. And certainly, for some, Afong Moy stirred a genuine desire to learn more about China. At least that was Afong’s long-held hope. In the final moments of the play, Suh has Afong Moy rue that she had not done more to create cross-cultural understanding between white Americans and the Chinese newcomers.