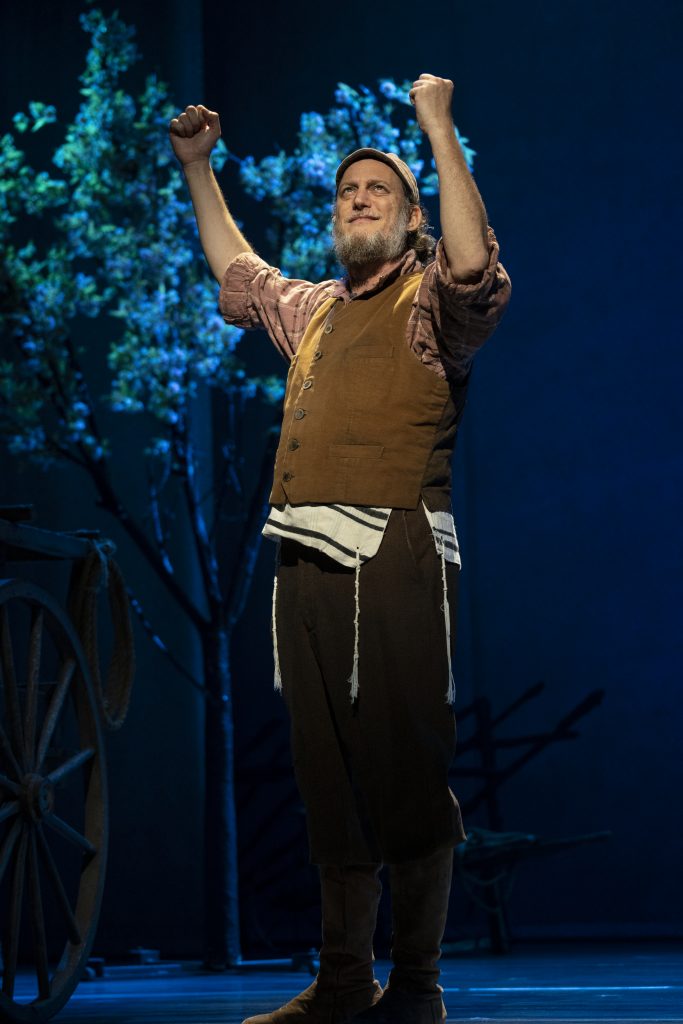 Yehezkel Lazarov (Tevye) in “Fiddler on the Roof”/Photo: Joan Marcus

When the Bartlett Sher production of “Fiddler on the Roof” opened on Broadway in 2015, the Russian annexation of Crimea had happened only a year before. It was an inspirational touch to open the show with a descendant going back to the village of Anatevka and attire himself like and become his ancestor of over a century earlier to tell the story of the refugee journey of his family.

No one could have guessed that the national tour of the production would be touching down in Chicago less than three months into the Russian invasion of Ukraine—the setting of “Fiddler”—giving the modern-day framing more relevance and poignancy than ever.

When Israeli actor Yehezkel Lazarov as Tevye intones the iconic line about villagers “trying to scratch out a pleasant, simple tune” without breaking one’s neck, our gaze takes in the present along with the past. The struggle then is the struggle now. In case we miss that message, Lazarov takes off his costume and returns to the present day at the end of the show while villagers who were given three day’s notice to flee their homes are shown in silhouette fleeing. A curtain call speech will connect the dots explicitly and dedicate the production to today’s refugees of Ukraine displaced by the war. Lazar Wolf (Andrew Hendrick), the butcher who unsuccessfully sought to marry Tevye’s eldest daughter early in the show, is even heading to Chicago.

Originally conceived as a fiftieth-anniversary production, the “Fiddler” that is enacted in between is a traditional one, even seeking to offer choreography “inspired” by legendary original director Jerome Robbins. (The bottle dancers of the Wedding Scene had real bottles on their heads, evidenced by the fact that on Tuesday’s opening night performance, two  bottles fell off.)

The arrangements are more klezmer than the Broadway-style of the original, heavy on clarinet and accordion. The tempos seemed deliberately slowed, the momentum more party-like than show-like.

But the biggest change is Tevye himself. No longer a larger-than-life character, he is more vulnerable, more subdued. It’s doubtful anyone ever thought that a classic Tevye such as Zero Mostel, Herschel Bernardi or Chaim Topol could ever actually fall off the roof, but this is a Tevye that could. His prayer soliloquies are more tentative, less sure. His quarrels with his wife Golde (Maite Uzal) and his daughters are less self-assured. It is worth noting that Joseph Stein’s book is unchanged, as are Sheldon Harnick’s lyrics. It is particularly powerful that this Tevye is more gentle and quiet. You could hear a pin drop when he disowns his daughter Chava (Noa Luz Barenblat) and your heart breaks when he can barely sing his tender ballad “Chavaleh.”