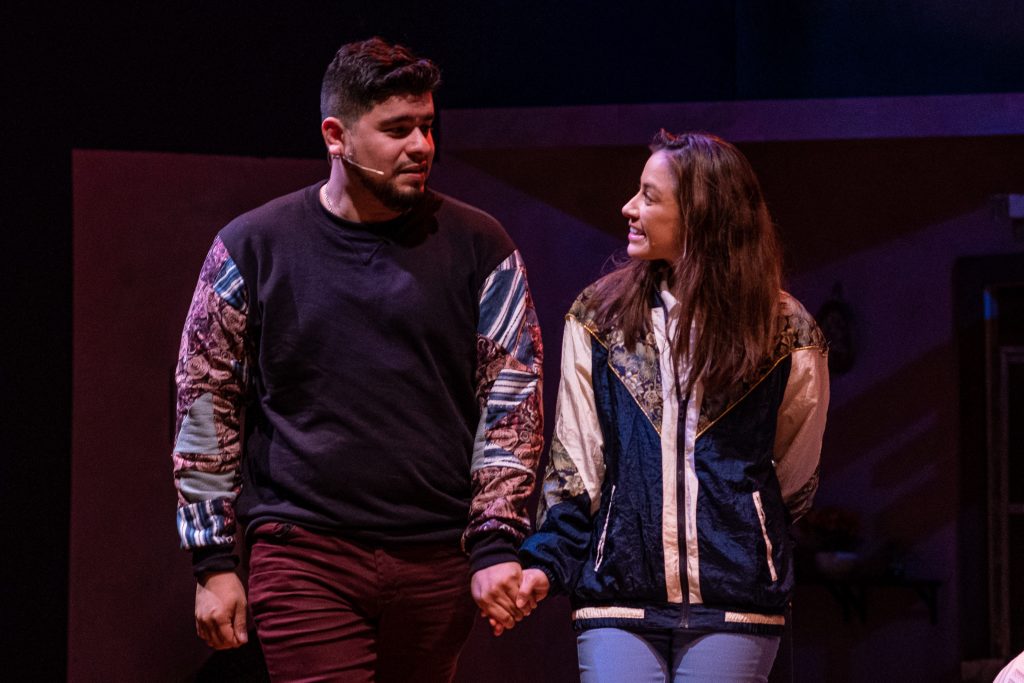 Brian Quijada (left) is the playwright and narrator and Gabriela Moscoso is Reina in Teatro Vista’s “Somewhere Over the Border” /Photo: Joel Maisonet

A circular stage surrounds a four-piece band in a pit at its center; the audience sits on three sides. As music plays and the guitarist, his back to the audience, begins to sing a decades-old tale of a young El Salvadoran woman who is full of life in every way, he climbs out of the pit and onto the stage, turning around to face the gathered spectators, in a powerfully effective bit of stagecraft. As he leads the ensemble in the show’s signature number, “Everyday Towns,” which lays out the foundational idea of “Somewhere Over the Border,” which is that the world is full of common folks just trying to make a better life for themselves and their families, you know right away that you’re in for a special evening.

That singing guitarist is Brian Quijada, who has written the show’s book, lyrics and music, and comparisons to Lin-Manuel Miranda are not overwrought. While not (yet) perfect, his mashup of his mother’s memories of crossing the border and later settling in Chicago with the “Wizard of Oz” is a masterpiece in the making. A little trimming here and there, and punching up a couple more of the songs and it would not surprise me at all to see this show on Broadway.

Reina is the pregnant teen daughter of a single mother in a turbulent El Salvador, beset by the poverty and repression of a developing nation in a civil war. The entire family works hard, very hard, to get by, but when Reina hears that someone else’s daughter is thriving in the promised land of the United States, she decides she has to leave her young son behind, for now, and do the same.

Since an illegal crossing is really the only option, her journey will be dangerous. Along the way, she befriends other dreamers, each a loosely rendered version of one of Dorothy’s travel companions from “The Wizard of Oz” (Tin Man, Scarecrow, Cowardly Lion), as they make their way to Tijuana, where their “Wizard”—the “coyote” who will help them cross the border—awaits. Though metaphorically spot on, Quijada wisely underplays the “Oz” elements, using them as a narrative device and placing Easter eggs in the story along the way that add fun but are not essential to following the show. In fact, I am on the fence as to whether “Oz” is necessary at all, or whether it’s just a narrative contrivance holding back the story.

The particular arrangement of the stage, with actors inhabiting multiple parts, and the need to go back and forth between El Salvador and destinations along the way could turn this mash-up into mush, but it’s to director Denise Yvette Serna’s credit that it never does. And the cast, led by Gabriela Moscoso as the soul of the show, Reina, fills the room with pathos and charm, whether it’s Amanda Raquel Martinez as the hip-swinging friend/timid nun, or Tommy Rivera-Vega as Reina’s supportive brother Cruz, a banana farmer with a brain. Quijada, as the narrator, is simply a force, managing to fill in several small roles with a personality both super-sized and small, so small, in fact, that he is convincing even playing Reina’s ten-year-old boy when she finally reunites with the child she left behind. 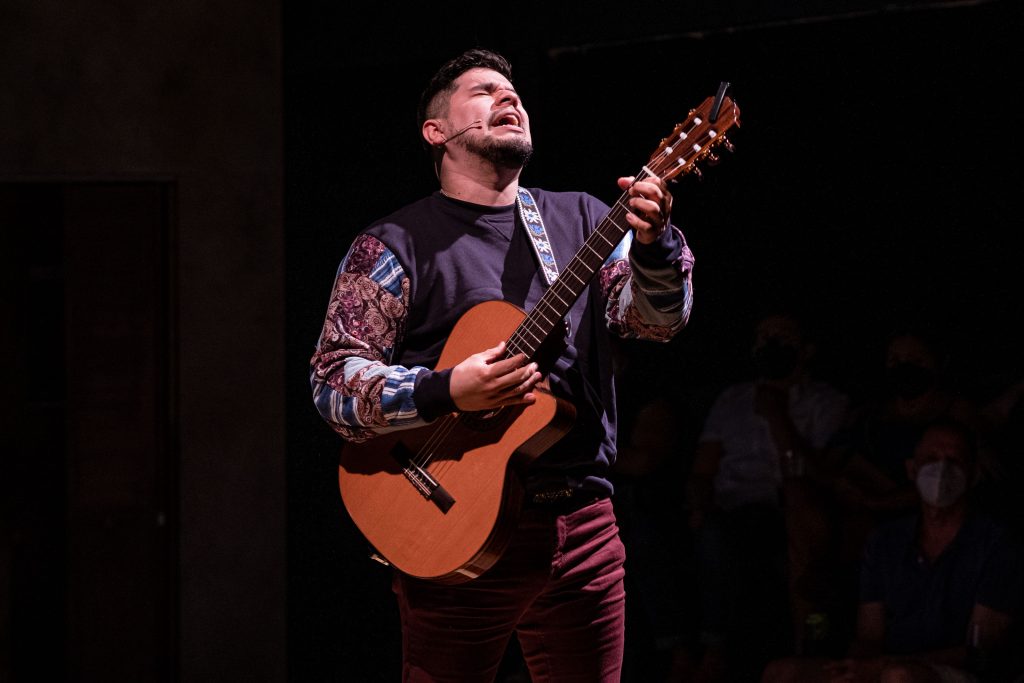 Brian Quijada is the playwright and narrator of Teatro Vista’s “Somewhere Over the Border”/Photo: Joel Maisonet

Like that other better-known quadruple-threat musical creator, Quijada’s music blends the soundtrack of his life, from the percussive rhythms of Latin America through hip-hop and into the musical theater canon. And he knows how to write a hook: I can’t get the refrain to “In the USA” out of my head, a week later.

Immigration policy might be the third rail of American politics, but only the most irredeemable soul won’t be touched by the universal themes of motherhood and the pursuit of the American dream in this all-American story. Besides, everyone knows that ruby slippers can’t compare with Air Jordans.