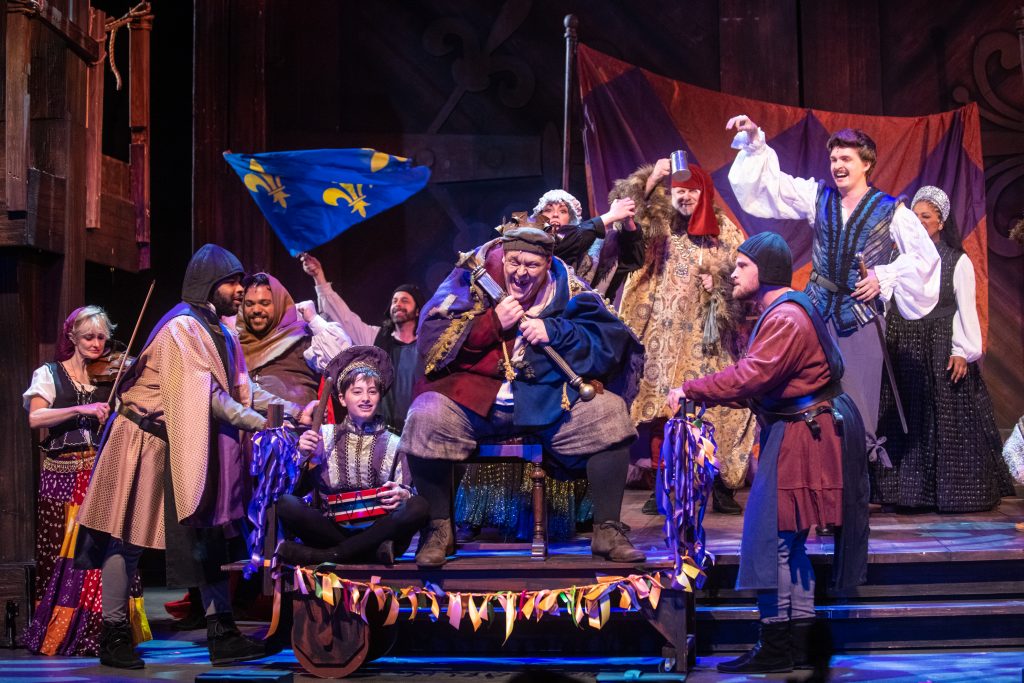 In the early 1990s, then-Styx lead singer, songwriter and keyboardist Dennis DeYoung was asked to play Pontius Pilate in a twentieth-anniversary all-star national touring company production of “Jesus Christ Superstar” that ended up on Broadway. His own arrangement and virtuosic vocal traversal of “Pilate’s Dream” stopped that show every night.

That experience led to DeYoung cutting an album of his own arrangements of Broadway standards as well as taking a crack at writing his own musical: an adaptation of Victor Hugo’s “The Hunchback of Notre Dame.” The DeYoung “Hunchback” ended up eclipsed by the Disney-animated musical version, although an album of DeYoung singing the score was released and excerpts would be performed at his solo shows. Live stage productions would be few and far between: a 1997 production at the Tennessee Repertory Theatre in Nashville and a Bailiwick Theatre production a decade later in Chicago. (Our review here.)

Enter Chicago director Michael Unger, who had a chance meeting with DeYoung twenty-eight years ago at Steppenwolf Theatre where Unger was then assistant director on a show. After hearing the score, Unger told DeYoung that he wanted to direct “Hunchback.” When Unger ended up as artistic director of Milwaukee’s Skylight Music Theatre years later, he set out to have DeYoung’s “Hunchback” be the work that would inaugurate his tenure in September 2020. Twenty months later, that pandemic-delayed, decades-in-the-making production is up and running.

Like Unger, I had heard DeYoung’s score in 1994 and was deeply moved by it. But after the 2007 Bailiwick production, I had doubts that despite its spectacular songs, DeYoung’s “Hunchback” was likely to become a viable stage property without a new book—it was and remains DeYoung’s own as are the music and lyrics. Its dramaturgy needed to be much more character-driven and the song textures and forces given more musical variety. Now, Michael Unger has served as a muse and lightning rod to set DeYoung’s creativity into overdrive in effectively addressing ambiguities and weaknesses of the narrative. This Skylight Music Theatre version is not only a spectacular all-new production, but much of the work has been reconsidered and reshaped.

What DeYoung always had right were the songs, no small accomplishment for a musical, and of course, the centerpiece of what attracts those of us who love the genre to the art form. DeYoung is an unabashed melodist and why not? He has an immense gift for melody and for dressing memorable melodies in poignant lyrics, as shown by his eight Top Ten hits for Styx that are so indelible that the band still thrives on performing them without DeYoung in the band for well over twenty years.

There are over thirty songs here that include anthems, arias, dances, choruses, duets and trios. The variety is eclectic and runs the gamut from liturgical music—original as well as a bit that Alfred Newman made use of in the 1939 film score of “Hunchback”—and opera to world music and pop-music power ballads and parodies with a well-assembled and powerful cast and ensemble that bring them all off stunningly. Whatever the future of this work and this production—and it is ninety-four precent ready for New York as is—these extraordinary artists need to record this score.

The songs now have fuller context and meaning. Steppenwolf ensemble member Kevin Anderson’s Frollo breaks our heart when he sings “Who Will Love This Child?” as a lullaby with a deformed infant in his arms. But now we have a backstory for Frollo’s sense of being ostracized and rejected that becomes a tender bond between he and the foundling he names Quasimodo.

A daring and inspiring cast choice is having operatic tenor Ben Gulley play Quasimodo. Gulley does have a slight resemblance to a young Charles Laughton, which calls to mind the 1939 film version. From the moment Gulley sings of his plight in the all-new aria “In My Silence” which stops the show, it is as if the soaring beauty of Quasimodo’s thoughts and shimmering singing voice are his real persona, not the physical deformities which meet the eye. This is a sensitive soul and a gentle and fragile being with piety and empathy.

Esmeralda (Alanis Sophia) is no less an outsider than Quasimodo. She is beautiful, to be sure, so much so that Frollo will blame her for bewitching him. But the real issue is she is discriminated against for being another race and religion. The G word, i.e., “gypsy,” is used sparingly here to describe Esmeralda and those of Romani ancestry. In fact, DeYoung has created an entirely new character Mahiette (Janet Metz), Esmeralda’s mother, to fill out this compelling aspect of the narrative. The moments where Quasimodo and Esmeralda are vocally united also indicate their common sense of alienation.

Additional pieces to the seven-piece orchestra would be great given the lushness of the score, but the music direction by Eric Svejcar is first-rate.

Lisa Shriver’s choreography makes the show pop not only with the Romani dancing featuring Esmeralda and Mahiette, but with the beggars of the Court of Miracles and the crowd of Parisians that even manage to get Quasimodo dancing during the Feast of Fools celebration.

This was my first-ever experience of Milwaukee’s sixty-three year-old Skylight Music Theatre. But if the extraordinary excellence of what Unger has done with DeYoung’s “Hunchback” is any indication of what is to follow, it won’t be my last.