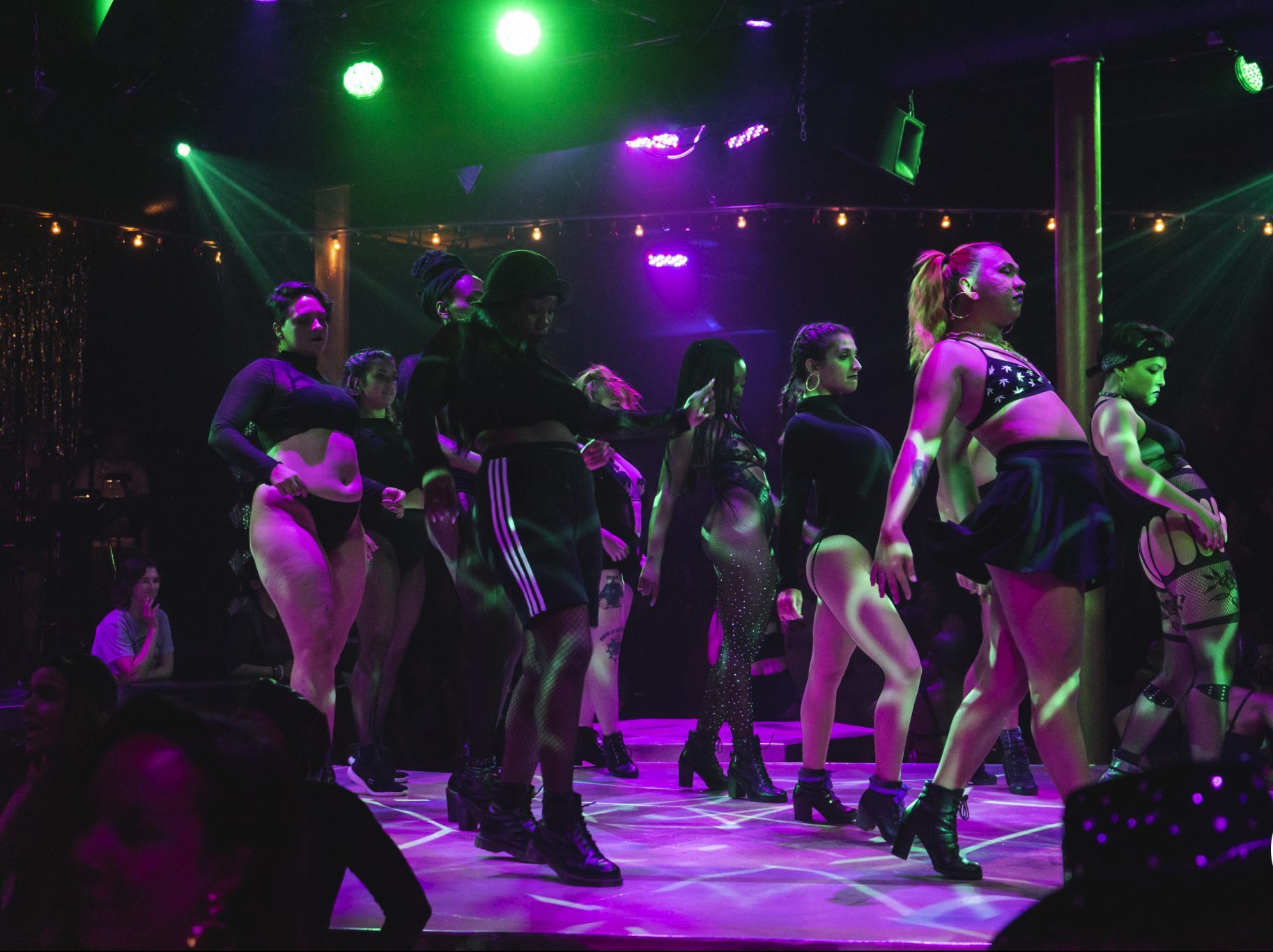 It takes a whole lot of honeys to make the cabaret extravaganza that is “The Fly Honey Show.” Erin Kilmurray, director, choreographer and one of the founding members of the Fly Honeys, repeatedly deferred in our interview to the contributions of an ever-growing group—lovingly known as the hive—of performers, musicians, writers and artists who have, since its founding in 2009, taken the show from small, DIY spaces to sold-out theaters. “Who the Fly Honeys are is a very, very long list of rolling folks who have shaped it over the years,” Kilmurray says. “Everyone it takes to put this beautiful piece together is a Honey. Once a Honey, always a Honey.”
And thank heaven for those Honeys. The show “for everybody, no matter the body” triumphantly returns from its two-year pandemic hiatus, promising to blow the roof off Thalia Hall, its largest venue yet, June 23-25. Producer Quinn Tsan says the move from the Den Theater, where the show last played in 2019, to Thalia reveals just how big “The Fly Honey Show” has become. “I knew the [Thalia] talent buyer, so I texted and casually said we should have a beer and talk about the Fly Honeys,” she says. “A week later they were pitching us on a two-night New Year’s Eve event. No one understood our permeation outside of who we thought our audience was.”

Then the Omicron surge delayed the New Year’s Eve event half a year, but there could hardly be a more appropriate occasion for the raunchy, all-body-loving, queer-celebratory, burlesque bash than Pride weekend. Kilmurray describes the move to Thalia Hall as “a kind of dream come true. I’m excited for the expansion of the identity of the project. The blessing of being at Thalia is we’re being asked to get creative and work with the architecture of that room—there’s a balcony and we’re thinking about having performers and dancers in the crowd, on the balcony… thinking about ways to bring the energy up in the corners.”

Moving energy—in “The Fly Honey Show” and other projects—is Kilmurray’s specialty; you don’t so much watch her choreography with your eyes as feel it pulsate through flesh, tendon and bone. She describes her approach as choreographing energy, energy that can be “intentionally crafted so it ricochets around the room.” Therefore a rock venue—where woots, hollers and dancing along are de rigueur—seems like a natural home for Kilmurray and the Fly Honey’s brand of performer-audience party-time energy exchange.

Of course, it takes everyone in a room to make a party, and Kilmurray is quick to point out that she’s one of three choreographers, working alongside Kasey Alfonso-Fabian and Alyssa Gregory to create a celebratory, inclusive culture in Fly Honey rehearsals as well as public classes and workshops that attract ensemble members of all experience levels. “The performance is just one element, the evidence of the practice,” Kilmurray says. “The individual brings themselves into the space in any way they want to. Everyone in the production costumes themselves and it can change every day. There is some striptease and nudity at times and participating in that reveal is in no way required. We shape the world of the show and let the people inside of it lead the way.”

And there are a whole lot of people inside: A central cast, a nine-piece band, and an ensemble of twenty-five to thirty people who rotate every night. And that’s just the folks on stage. As the hive grew, Tsan says she, Kilmurray and their collaborators had to think intentionally about how the organization would operate. In keeping with the collective spirit of the show, the Fly Honeys have been organically developing a horizontal leadership approach, hiring performers from the show into administrative and production roles. “We’ve been creating together for a long time, so adjusting the producing model to follow that is allowing us to get closer to our mission and values,” says Kilmurray. “The beauty of it is the team is amazing and there is a communal way of working that feels really safe and interesting,” Tsan says.

The show at Thalia will include the familiar Fly Honey ingredients—brass band, emcees, big ensemble (all in feathers, leather and fishnets)—along with DJs to keep the party going. And Kilmurray promises the proscenium stage won’t hinder the Honeys from having “a catwalk moment.”

“After two years of what we’ve gone through, everyone deserves to have a night that feels like a release of some kind,” she says. “And to remember what it’s like to be in a joy bomb of bodies and people.”