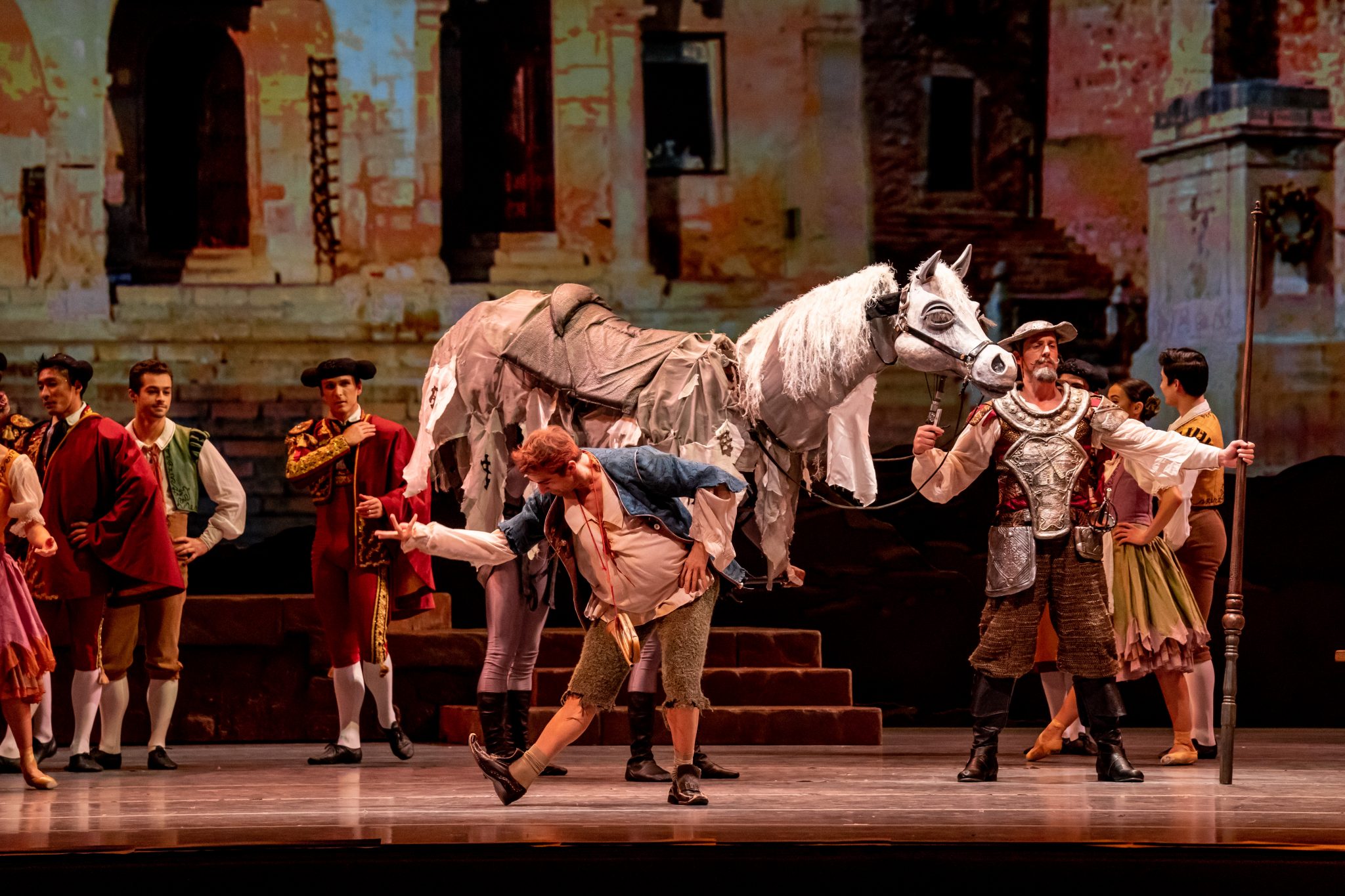 Performance-wise, the Joffrey Ballet’s production of Yuri Possokhov’s “Don Quixote,” running through June 12 at the Lyric Opera House, is terrific, displaying the company’s trademark combination of sterling technique and dramatic flair. There’s not a false step (other than the pratfalls by the effete aristocrat, Gamache, played with clownish glee on six-inch heels by Fernando Duarte) or an inelegant line in the ensemble, richly costumed by Travis Halsey. The partner work is outstanding, especially the push-and-pull courtship scenes between the commanding Dylan Gutierrez and majestic Victoria Jaiani, as thwarted lovebirds Basilio and Kitri, and the flirtatious pas de deux between Stefan Goncalvez as a “famous toreador” and Christine Rocas as Mercedes, a sultry “street dancer.”

But the show never congeals as a unified, dramatic work of art, and close readers of the preceding paragraph may have already guessed at the reason. Thwarted lovers? Foppish aristocrats? Bullfighters? Street dancers? These are hardly the central elements of Cervantes’ masterpiece, considered the first modern novel and arguably the most famous and influential work of fiction ever published.

Ever since “Don Quixote” was first translated into dance by Marius Petipa in 1869 for Moscow’s Bolshoi Ballet, with a score by Viennese composer Ludwig Minkus, the connection between novel and ballet has been tenuous at best. Petipa and Minkus turned the long, convoluted work into a comic opera, populated with characters more redolent of “Carmen” and “The Barber of Seville” than Cervantes’ picaresque tale of the tattered Spanish knight lost in a fairy tale world derived from old storybooks, and his loyal, hard-headed squire, Sancho Panza. Only one major incident from the book is retained: Don Quixote’s famous attempt to tilt with windmills, which he perceives as giant monsters. The moment comes to vibrant, exciting–but brief–life in the Joffrey rendition, thanks to the artful projections created by Wendell Harrington and Paul Vershbow. The other scenes–set in the town square or in an enchanted, pastoral landscape reminiscent of “Swan Lake”–seem to come from some other and more recent literary sources, related to “Don Quixote” only in their stereotypical Spanishness.

The version of “Don Quixote” presented here is much newer. Choreographed by the Bolshoi-trained Yuri Possokhov, it was commissioned by the Joffrey and premiered in 2011 at the Auditorium Theatre, which was then the Joffrey’s home. Working from the Minkus score, Possokhov’s version contains some elements of the original Petipa ballet, but with more of a Spanish tinge, including touches of flamenco.

In his program note, Joffrey artistic director Ashley Wheater states that “Most versions of the ballet focus on the escapades of the barber Basilio, and his attraction to Kitri. [We] decided to refocus our attention on Don Quixote.”

This decision is not readily apparent. Don Quixote is sidelined or absent from the stage altogether for many minutes at a time. There’s a bit of sword-waving and lance-wielding (or rather bedpost-wielding), but not much dancing. Miguel Angel Blanco is miscast in the role, conveying little of the protagonist’s lovably loopy, seriocomic idealism. And Derrick Agnoletti’s Sancho Panza is so hobbit-like, one wonders whether his master’s quest involves disposing of a magic ring belonging to Sauron. Of the novel-based characters, the one who comes out best is Rocinante, the knight’s emaciated horse, cleverly designed by VonOrthal Puppets and skillfully operated by Andre McGregor II and David Oldano.

The textual discrepancies won’t matter to hardcore balletomanes, who will thrill to the grace and precision of the surging, circling corps; the thrilling leaps and lifts—executed with seemingly effortless perfection—of the soloists; the gorgeous pastel-toned costumes, which reflect the fashions of the nineteenth century more than the seventeenth; and the spirited score, more Italian than Spanish, played with brio by the reliably excellent Lyric Opera Orchestra under the baton of Scott Speck.

For others, though, who look for some kind of storyline in a full-length story ballet, this “Don Quixote” may disappoint. However strong the dancing, two-and-a-quarter hours of disconnected set pieces lacking in conflict, suspense or coherence is just too much. This is a musically and visually monotonous show, lacking in emotional range and full of repetition, including a third act consisting of crowd-pleasing but content-free encores.

After a century-and-a-half, the old Minkus score seems tired. The moment has arrived to start from scratch with “Don Quixote,” this time taking the text seriously. True, it’s not an easy novel to adapt to an abstract medium like dance–such an effort might be considered quixotic. But an imaginative creative team could at least evoke the book’s satirical mood and its brilliant interplay between reality and imagination. By now, the much-mocked old knight and his loyal squire have earned a little respect.