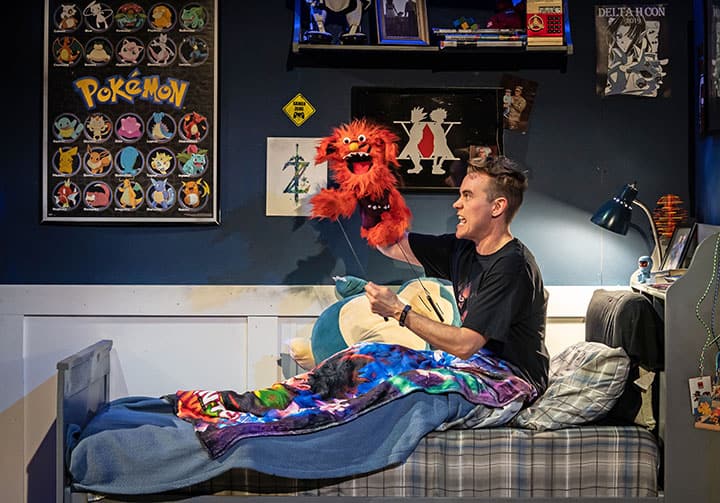 “Hand To God” at Paramount Theatre

One of the first mentions of a “satan” in the Old Testament occurs in the Book of Job, when one of God’s divine retinue voices doubt over Job’s piety. This figure is called “the adversary,” from the Hebrew, anglicized as “ha-satan.” This isn’t the father of lies or ruler of hell as seen in later Christianity, but a divine spirit whose role is to contradict and challenge God, not unlike a prosecuting attorney. The original satan voiced uncomfortable truths when no one else would.

The comedy in director Trent Stork’s production of “Hand to God” at the Paramount Theatre revolves around how much people struggle to avoid confronting uncomfortable truths about themselves. While the tone is like “The Exorcist” as filtered through “South Park,” there is an honest emotional core within the play.

The story follows a troubled young teen, Jason (August Forman), and their mother Margery (Monica West). Six months ago, Jason’s father died of a heart attack, and neither have fully processed it. Since then, Margery has rediscovered religion and volunteered at the local Lutheran Church to teach an after-school puppetry class to the few teens that show up. Jason takes to puppetry, but it becomes clear that something is deeply wrong with their puppet character, Tyrone (puppeteered and voiced by August Forman). They stop taking the puppet off—or can’t. And Tyrone begins to have a mind of his own, as if taken over by something demonic.

August Forman’s Jason looks uncomfortable in their skin, as if the air around them has been cinched tight to keep their most unspeakable feelings from escaping. As much as they want to make others happy, their alliance with Tyrone allows them to say all the things they couldn’t before. It’s clear that Tyrone is Jason’s personal “ha-satan,” the adversary who can speak his most taboo thoughts, yet August’s portrayal leaves enough room to question whether Tyrone is truly supernatural or a dissociated part of Jason.

Monica West’s Margery is isolated, melting inside, barely keeping it together through her puppetry class and tenuous faith in God. Yet while Tyrone can lash out on Jason’s behalf, Margery can only internalize her anger and pain, which leads to her lashing out through a hilariously sadomasochistic affair. Her struggle to be at peace with herself points to the alternate interpretation of Hell as not just a place of punishment but any place where you feel most isolated from God. 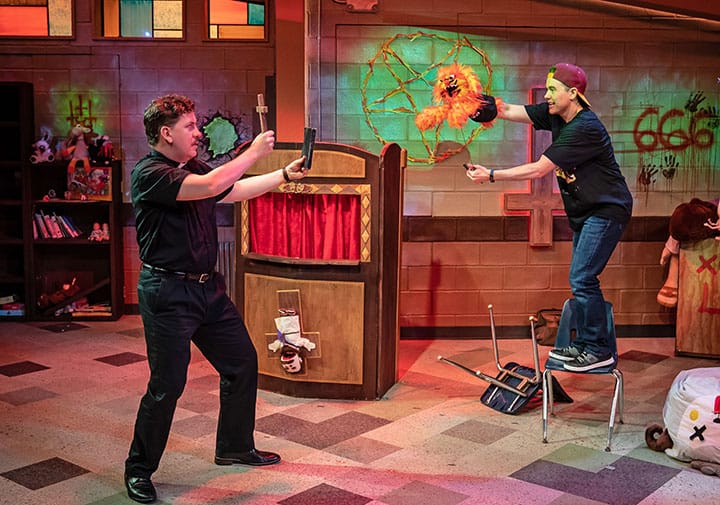 “Hand To God” at Paramount Theatre

Not helping Margery’s sense of isolation is Pastor Greg (Adam Wesley Brown), the outwardly doofy fun-dad Lutheran pastor who hides his fair share of darkness. If Jason and Margery struggle to manage their demons, Pastor Greg denies having any—a self-deluded person who believes far too blindly in his unquestionable goodness. The other two teens taking Margery’s puppetry class are Jessica (Felicia Oduh) and Timmy (Jordan Moore). Felicia Oduh brings a ton of energy, expansiveness and individuality to a character that, frankly, functions as little more than as the protagonist’s romantic interest. In spite of that, Oduh plays Jessica as someone who’s made peace with her outsider status long ago, and is confident in herself and her interests. She’s into Balinese shadow puppetry, and that’s awesome! Jordan Moore as Timmy is such an unabashedly romantic goon, and Jordan Moore captures the sentimental side of this school bully.

If this production can be faulted for anything, it’s that for all its foul-mouthed and raunchy content, the production is well-contained and inoffensive. The performances are spot-on but felt several clicks under pace. It felt constrained, yearning for a more manic energy but falling back into a comfortable naturalistic tone, as if fearful that going further would sacrifice emotional authenticity. If a moment in the play could stand for this idea, it’s Margery’s semi-destructive freakout in Act One: wishing to release fully, but too self-conscious to do so, and so she overturns some stuffed animals as a compromise. Not helping the under-clipped pace were long scene transitions taken to wheel out beautiful, elaborate-yet-cumbersome sets.

“Hand to God” is a deeply funny, foul-mouthed play about grief and the necessity of devils. The performances are excellent and skillful, but the production is presented in a fairly safe package. Even so, judging by the deeply divided audience reactions on Saturday, “Hand to God” might be as out-there as some of Paramount’s theatergoers can bear. And I think dividing your audience is a good thing. If you want to push boundaries, you might just need to be something of an adversary.

“Hand to God” runs through July 10 at the Paramount Theatre, Copley Theater Space, 8 East Galena Boulevard, Aurora. Tickets can be purchased at paramountaurora.com or through the box office at (630)896-6666.