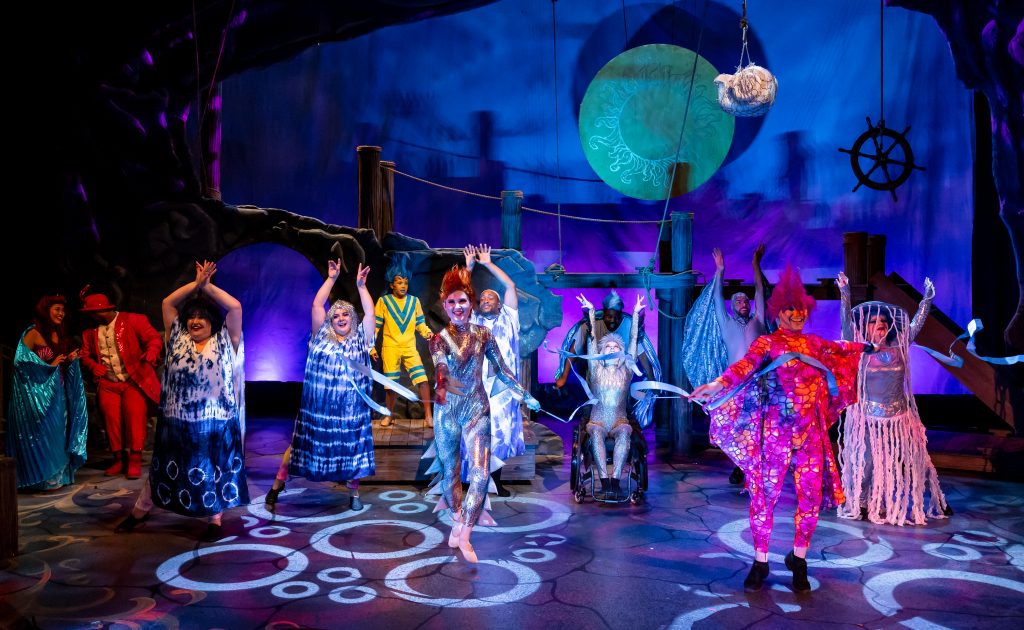 “The Little Mermaid” was the 1989 animated feature that ushered in a new era of Disney animation, where the works were structured much like a Broadway musical. “Mermaid” would feature double-Academy Award-winning music (Best Score and Best Song) composed by Alan Menken with lyrics by Howard Ashman.

Of course, it was inevitable that these animated tales would come to the stage as actual musicals, although “Mermaid” was relatively late. It started a Broadway run nearly twenty years after the original and was not the sensation of theatrical predecessors including “Beauty and the Beast,” which ran for thirteen seasons, and “The Lion King,” which is still running, twenty-five years after opening. By contrast, “The Little Mermaid” opened in 2008 and closed after only a year-and-a-half. There was never a national tour, so this Music Theater Works’ production offers a rare opportunity to see the show professionally staged.

Menken composed several new songs for the Broadway version with lyrics by Glenn Slater (Ashman passed in 1991). These develop the characters as well as introduce new characters and more expand the story, but by and large don’t have the punch of the songs that are familiar from the film.

The best of these is a new introductory aria for Ariel, “The World Above,” which Joselle Reyes brought off charmingly, although on opening night, sometimes slightly under pitch at the end of phrases. The Prince (Nathan Karnik) was also a bit pitchy in his introductory number. Both looked their respective parts but there was little chemistry between them so the love aspect of the show seemed to never quite get out of the water.

Much more lively is Ursula the Sea Witch (Caroline Lyell) and the written-for-the-show Valkyrie-like sisters who can’t stop singing or dancing. Flounder (Eloise Mulliken) nearly steals the show. King Triton (Thomas E. Squires) was deafeningly over-amplified and had microphone problems all evening. Feedback, static and erratic echoes and white noise were regulars under the sea. This was in the smaller North Theatre, so amplification was not necessary in any case but if employed, needs to be monitored and readjusted in real time.

The calypso and reggae strain of the score was not given much of its due as the tiny ensemble was also unevenly amplified with trumpet and drum set dominating the timbre and texture.