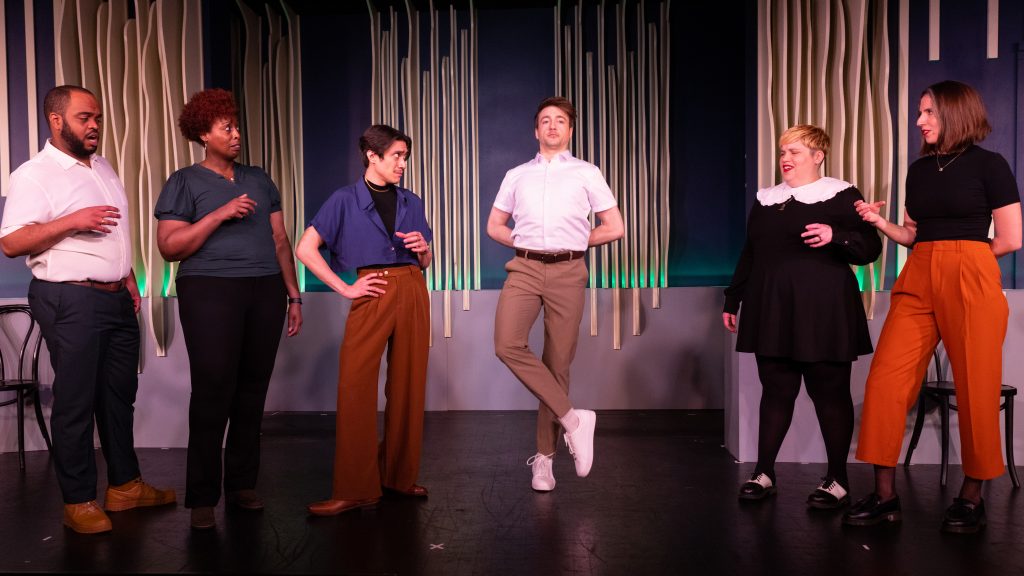 The Second City’s mainstage has hosted 109 revues prior to the current offering, which is entitled “Do the Right Thing, No Worries If Not.” This show comes after a tumultuous few years for America’s biggest and most essential showcase for live comedy. There was a fire, controversy over the roles—and lack of roles—for Black performers (which was covered by the New York Times), cast desertions, a declaration by its owner that he was selling the company so it could find a new direction. Oh, there was and is COVID and the period of darkened theaters. I don’t even want to list the social absurdities outside the theater. God, no! With all that, the current show has something to prove. We all need to be in a room laughing together. We need to laugh at the peculiar social and political currents of our time, at the purely silly and absurd and—gosh, I hate to admit this—at dick and vagina jokes. This show has it all.

As usual at The Second City, the mainstage show is created by its cast members. For the evening show I attended, the night after the official opening, one of the key cast members was absent and so were some of his bits. The show is often laugh-out-loud funny, all while making fun of the U.S. Senate, the experience of pregnancy and its medical routines, time-travel movies, uncontrollably hormonal tween-age boys, fat shaming, Irishness and old-school gay stereotypes.

Some material offers 2022 spins on Second City’s standard fare on dating, weird families and sex-crazed fish out-of-water gags. They’re crowd-pleasers and these days it feels good to be in a laughing crowd. The best moments, however, are purely absurd ones. Claire McFadden, formerly a writer for the witty video-game contests produced at Chicago’s Jackbox Games, brings her nimble intelligence and malleable face to a couple of killer sketches. One layers wokeness on a group of partiers who really want to be verbally abused, not treated sensitively. Another is McFadden’s take on French cabaret songs. Watch, too, for Kiley Fitzgerald’s Jurassic gynecologist. Cast member E.J. Cameron created so many funny characters he could be a revue all by himself.

Other audiences will certainly see a different version of the revue than what I saw, but, heck, this is improv and change is a constant. There are costs and benefits when the core crew isn’t all together. At the top of the show, the cast worked to get its footing but grew more confident and quick-witted soon enough. They even seemed to enjoy the change. They may also have turned to the audience for more suggestions than usual, which gave the show extra spontaneity, and, judging from how often the cast made each other laugh, maybe some extra inspiration. One of the funniest bits of the evening came early from an audience member in answer to the cast’s call for a prompt from the audience. It went something like this:

“Name an honor or award you once received” came the question from cast member Kiley Fitzgerald.

“I was in a science fair once,” answered a woman in the back of the theater.

“What was in your experiment?”

“It was with mice,” said the woman.

“What did you do with them?” asked Fitzgerald.

“I gave them NyQuil to see how they’d react to increasing doses.”

The woman paused then answered. “They died.” What followed might have been the biggest laugh of the night. Fitzgerald summed up the experiment’s findings. “So if you give someone enough of anything they die. Thank you.”

The suggestion was so good that, oddly, the cast didn’t seem to know where to take it from there. I, for one, would have loved to see them develop a bit from the murderous science-fair confession.