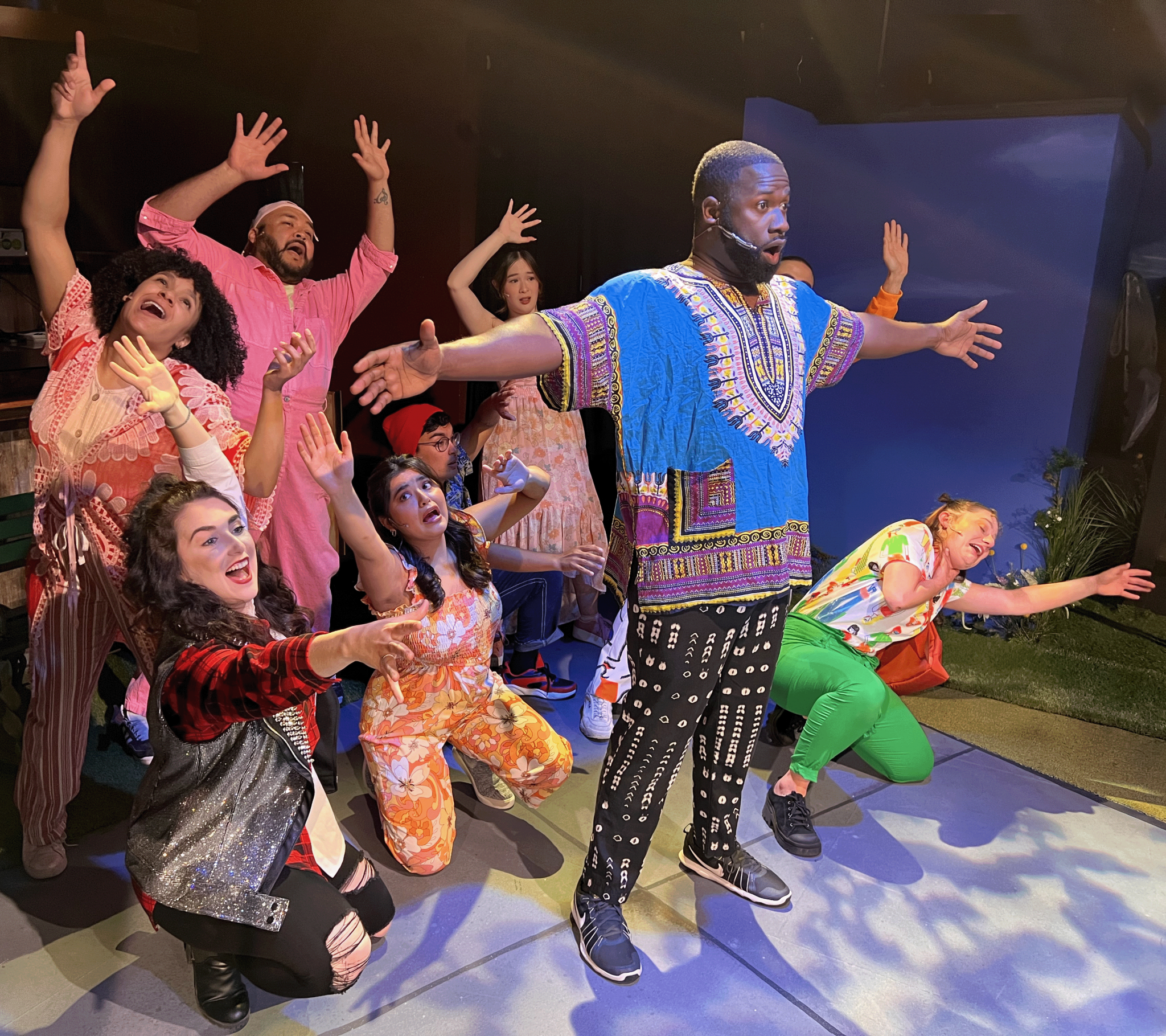 “Earth shall be fair and all her people one,” sings one saucy disciple in Theo Ubique’s new production of “Godspell,” written by John-Michael Tebelak with music and lyrics by Stephen Schwartz. Though “Godspell” was first produced just over fifty years ago with words that were first written thousands of years ago, its lessons could not be more timely. Now is the time to come together in peace and love.

The messages of “Godspell” are told as parables taken from the Bible. The cast of this production, directed by Christopher Pazdernik with musical director Jeremy Ramey, perform these with a light-hearted, infectious energy. Austin Nelson Jr. (who portrays Jesus) bounces around like everyone’s favorite grade school teacher, who comes to class with boundless energy, silly voices and ridiculous activities that get students excited about learning. In turn, the ensemble is a delighted pack of pupils, eager to listen and act out his teachings. They run from one scene to the next, making seamless transitions between songs and stories. That fast-paced rhythm is essential to keep the audience engaged with a show with a very loose plot.

It was announced at the beginning of the press performance that understudy Chamaya Moody would play Ashley Saul’s role. But I couldn’t figure out who the understudy was until I checked the program during intermission. With every part so well-cast and every movement so well-rehearsed, everyone fit into their roles. “Godspell” is one of the best shows to perform as an ensemble. Each cast member shares equally in harmonies and storytelling, and has their moment to shine with a solo. These singers do not disappoint. Each voice is powerful in a different way, from Laz Estrada’s sweet tenor in “All Good Gifts” to Alix Rhode’s bubbly “Bless the Lord” and Hannah Efsits and Quinn Simmons’ gorgeous and heart-wrenching “By My Side.”

The production shows great attention to detail, from the grass-like carpet under our feet to the lamps flickering like flames in a trash can to reflect the rough, outdoor street setting. The set, designed by Yeaji Kim, makes us feel like we’re immersed inside the musical. When the actors weave in and out of the seats, it brings us deeper into their inner circle, making us a part of their stories and jokes (even if we were, sometimes, the punchline). The ad-libbing characteristic of this show was fun and only occasionally distracting when a joke didn’t land. But that happened rarely, and the cast does a great job of using modern cultural references to make the language more digestible.

The costumes, designed by Rueben Echoles, are simple, the motley, eclectic patchwork of clothing you’d see walking around Wicker Park, and suited to each character. Nelson wears a T-shirt of a lion wearing headphones, a clear symbol that he is the hip son of God. Anna Marie Abbate (who plays Judas) wears a shirt split in the middle—red and black on one side and white on the other—to foreshadow her dual nature. “Godspell” offers plenty of room for interpretation. In the original production, the characters were depicted as street clowns, but these disciples are more like ordinary people, colorful artists, yes, but still approachable.

Abbate’s performance of Judas is especially nuanced, depicting the internal struggle of a passionate believer who faces doubt. Jesus is betrayed by Judas for thirty pieces of silver, leading to his capture, crucifixion and death. But this Judas is tortured by internal turmoil over her decision and stays with the group to lament. Her wide-eyed expression of shock and devotion while the rest of the cast carried the dead body of Jesus is fanatical, reminiscent of the kind of follower who loves too much and too wildly, who—when disillusioned just a little—kills the one they worshipped in an act of passion, only to regret it later.

No matter our background, we were all taught the same lessons as children. Be kind. Be generous and understanding. Don’t hurt others; treat them the way you’d like to be treated. Those are the messages of “Godspell,” delivered with joy by this cast of friends to show you how to build a beautiful city of light and hope.