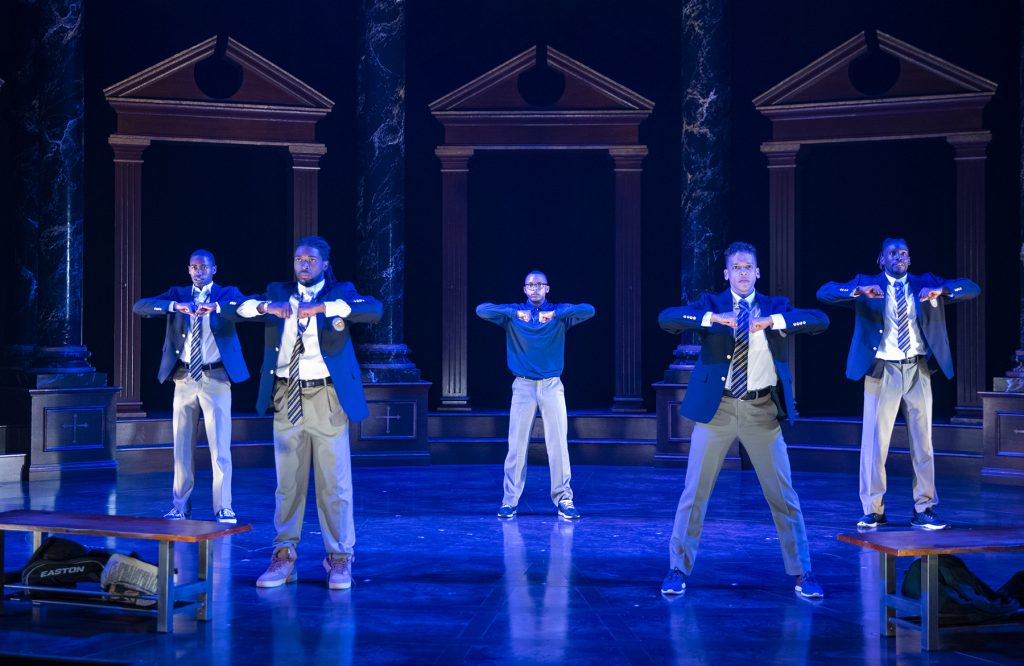 “Steppenwolf Theatre Company,” one person attached to the company told me recently, “doesn’t do musicals. It does plays.” Yet, on occasion, Steppenwolf nevertheless manages to fill its shows with music and musicianship worthy of the best musical theater. What’s more, the stunning musical moments tend to be delivered a cappella. Perfectly pitched. There were the nine voices of Ladysmith Black Mambazo in the company’s productions of 1992’s “The Song of Jacob Zulu” that thirty years hence are still emblazoned in my musical memory. An earlier New York incarnation of playwright Tarell Alvin McCraney’s “Choir Boy” was nominated for a Tony as a play. Still, among other compelling reasons to see—and not miss—the current Steppenwolf production is the power and musicianship in nine songs sung by the five young men who play the students in the choir at the Black Christian Charles R. Drew Prep School for Boys.

The choir is the boarding school’s pride and also its big hook for fundraising. The young men are under intense pressure to sing perfectly, but also to feel and convey the spirit of the pop gospel and traditional spirituals central to their repertoire. As elements in the play, the godliness of the religious songs is weaponized against the insecurities and adolescent cruelty of the young men. The tunes entreat faith, righteous action and endurance against injustice, but the non-musical action depicts the bullying endured by a particularly smart and gifted and self-described “swishy” gay student. The stress between tune and action is poignant throughout. Especially so in a few scenes during which the young male actors are unabashedly nude—very nude—and the sexual tension is high. Shower time is fraught in high school and perhaps even more so in religious boarding schools. (The company urges those with questions on the age-appropriateness of the production to contact the box office.)

The opening scene is a song, “Trust and Obey,” soloed by Pharus (Tyler Hardwick, who has since been replaced by Jos N. Banks), the gifted gay student, who acts and sings with a mix of bravado and hurt. The lyrics intone, “While we do His good will, He abides with us still…” At the same time, Pharus’ choirmate and rival, Bobby (Gilbert Domally), the raging nephew of the headmaster, quietly heckles Pharus with homophobic slurs. Pharus pauses for four seconds to consider how to respond. He decides to soldier on and nails the song. 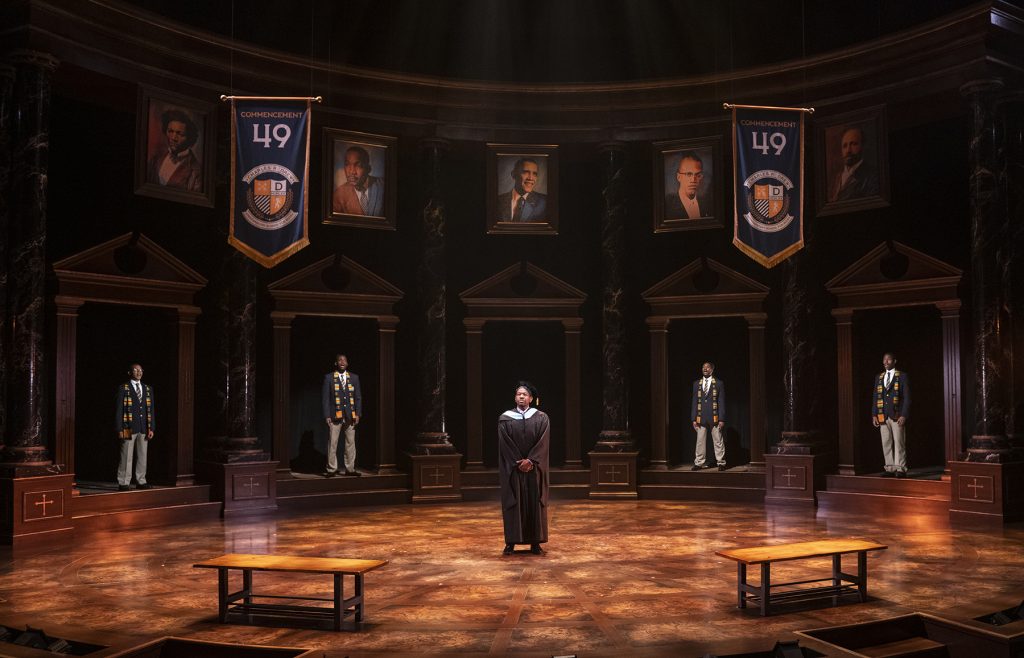 In a program note, playwright McCraney urges the audiences to “laugh, humph and ah.” The opening-night audience didn’t need prompting. On the first number and others, such as “Couldn’t Hear Nobody Pray” and “Motherless Child,” the audience called, responded and cheered. Within the world of play onstage, however, Pharus’ short pause in the song stirs the wrath of the headmaster. He reminds Pharus how his imperfect performance has threatened the school’s future and his own. Never mind that the Lord “abides with us still.” Pharus refuses to reveal who distracted him, citing the students’ code that demands Drew School men never lie or snitch. Clever questions from the headmaster, however, yield enough information to implicate Bobby, whom the headmaster later reprimands. The other students conclude wrongly that Pharus ratted out Bobby. The play follows the shifting alliances around Pharus and how he deals with his ostracization, his sexuality and his talent.

The trajectory is familiar. It melds two potent genres: the boarding-school drama and the story of a stymied bright young gay person’s assertion of self. McCraney is a Steppenwolf ensemble member who won an Oscar (with Barry Jenkins) for the adaptation of his early play, “In Moonlight Black Boys Look Blue,” into the film “Moonlight.” He’s a smart writer and even the stock characters in “Choir Boy” get crackling dialogue. One long speech precociously echoes bell hooks. If the righteous song acts as a kind of superego hovering above the action, the students’ facility to cut each other down with dueling Biblical aphorisms feels like bloodsport.

We feel the stakes for each of the young men. We see them fight for what they need, whether it’s the academic standing that earns a scholarship, the acceptance of an overbearing parent, or respect from their peers. Bobby wants a school free of “swishy” schoolmates. Pharus yearns for a community where his loves and talents can flourish. The play captures, too, how the young men, even when they battle each other, love each other, too. That’s McCraney’s playwright wisdom that likely comes from hindsight and which school dramas often miss.

For those who see the show, I hope the audiences are as diverse and as lively as the one on opening night. Premieres can be wrecked by the over-enthusiasm of a cherry-picked crowd. I don’t know much of Christian scripture or the ways of worship and song in the congregations of Black communities, but much of the audience did. The audience response made the performance electric, in part, because it provided energy and enthusiasm the fictional characters on stage crave. Another bit in McCraney’s written note to the audience reads, “…we need your focus and the artists…need to keep theirs; so breathe in together, let’s see together, we mourn, laugh, amen, get mad, exhale and sing…together.” And so it went. And so, one may expect, it will go throughout the run.