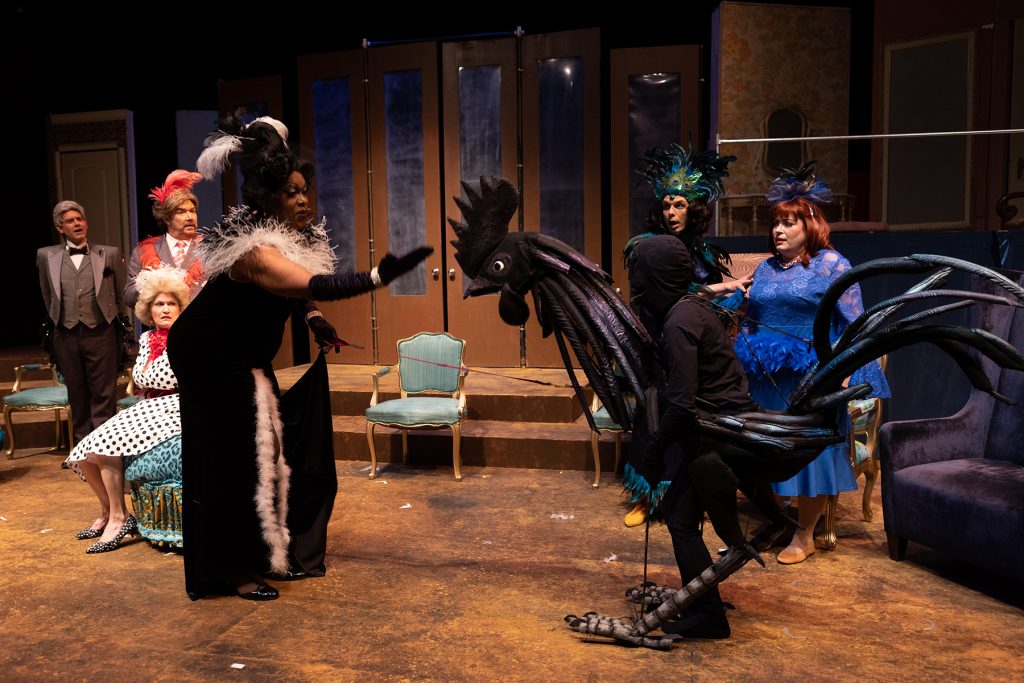 Could you solve the mystery in Hell in a Handbag’s “A Fine Feathered Murder: A Miss Marbled Mystery”? With a lucky guess, perhaps. But if you’re hung up on the loose plotting, you’ve lost the point. If you’ve ever rewatched the 1985 film “Clue,” a clear reference point for “Fine Feathered Murder,” you quickly pick up that every piece of evidence is a red herring. There never was a solution. The pageantry was what mattered, with each character getting the spotlight as the eye of suspicion passed over them. The Hell in a Handbag team understands and leans into this, making the murder-mystery genre fit the company’s melodramatic camp sensibilities like an elbow-length glove.

With that in mind, we can see “A Fine Feathered Murder” on its own terms: parodic pageantry of buffoonish characters dealing in quirks, quips, double-entendres… maybe even murder.

“A Fine Feathered Murder” follows Miss Marbled (Ed Jones), a parody of Agatha Christie’s amateur spinster detective Miss Marple, and her precocious, naive niece Vivian Birdsong (Caitlin Jackson) as they visit chicken-farm magnates Lord Reginald Fowler (Shane Roberie) and Lady Violetta Fowler (David Cerda) at their estate for the Fine Feathered Ball. As more guests arrive, Reginald’s cruel treatment of his family and business partners paints a target on his back big enough to roost on. When he’s inevitably murdered, Miss Marbled must solve the case while dodging the misogynistic and bumbling Inspector Byrd (also Shane Roberie, trying his best to solve his own murder).

Since following the mystery isn’t essential, the real focus and fun is watching an ensemble of quirky suspects bounce off each other as they maneuver to avoid suspicion. The ensemble’s performances strive to make each character distinct and memorable, in no small part thanks to costume designers Beth Laske-Miller and Bill Morey, wig designer Keith Ryan, and makeup designer Sydney Genco. Everyone gets a moment to shine: an interpretive dance by fabulous and temperamental man-child Charles Fowler (Tyler Anthony Smith); the debut of a monstrous rooster and double-entendre by Fowler’s American business partner, Treasure Abundance (Coco Sho-Nell); the omnipresent German maid as severe as her unibrow, Gerta (Sydney Genco); and the resident “chicken whisperer,” Chick (Nicky Mendelsohn) who might be more bird than human, and more. 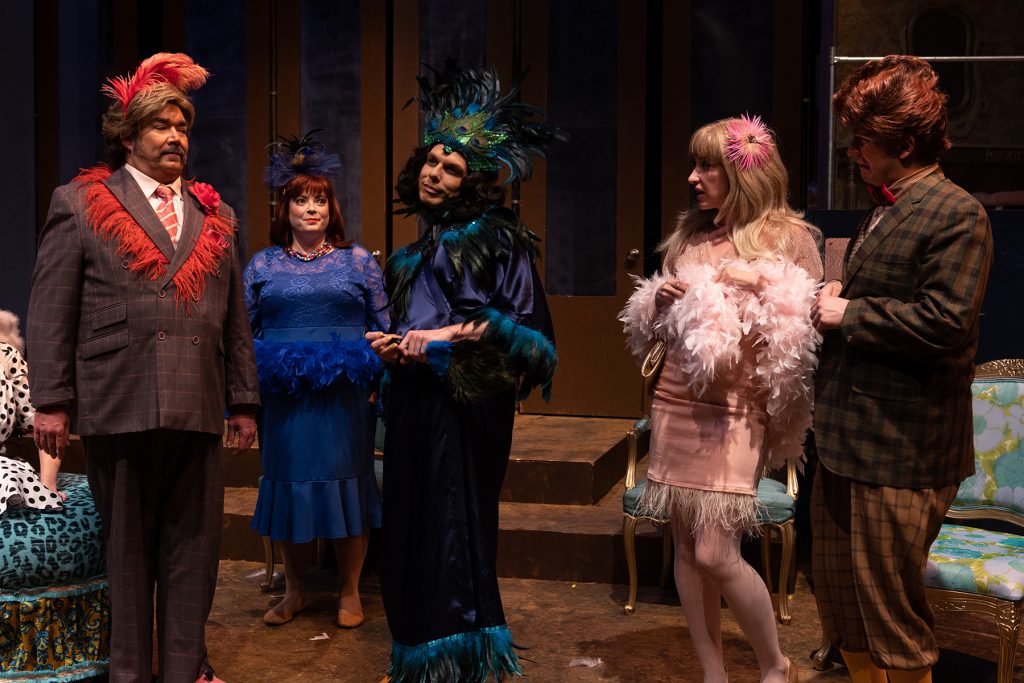 Amid the ensemble’s high-camp fun is an unfortunately overshadowed title character. Miss Marbled is faithful to her role model, aside from when, on the night this reviewer saw the show, her dialect migrated from the British Isles to the Transatlantic between scenes. Still, the septuagenarian sleuth shtick seems too restrictive for this parody. If we’re to see further installments of Miss Marbled’s adventures—and I hope we do—we’d like to see her stand out from the crowd as more than a side character in her own story.

True to Hell in a Handbag’s style, the jokes come fast, frequent and dirty (“You’re a blue tit.” “Well, there is a chill in the room!”). When they land, they land hard; when they don’t, they really don’t. One such example is an unclear recurring-ish joke that Miss Marbled doesn’t want to be confused with Miss Marple. Is this a meta-theatrical bit, or does Miss Marple exist elsewhere in the play as a rival detective? Will she show up at the end in a kind of Deus-ex-Agatha? Yet these head-scratchers are fewer and further between, leaving us with a light comedy full of zingers and purposefully scene-chewing performances.

Some audience members may be skeptical of endorsing light fare like “Fine Feathered Murder” given recent events—that common question, “Why this play now?” Yet it’s not as if the comedy in this production is entirely escapist. The gravity of David Cerda’s line, “Wherever there is a man, there is evil,” sent ripples through the Saturday night audience. Perhaps what this production can offer in addition to a couple hours’ reprieve is a story where justice is assured by the end. For now, that’s reason enough.

“A Fine Feathered Murder: A Miss Marbled Mystery” plays at the Chopin Theatre, 1543 West Division. Through August 13. Tickets start at $24 at tickettailor.com.