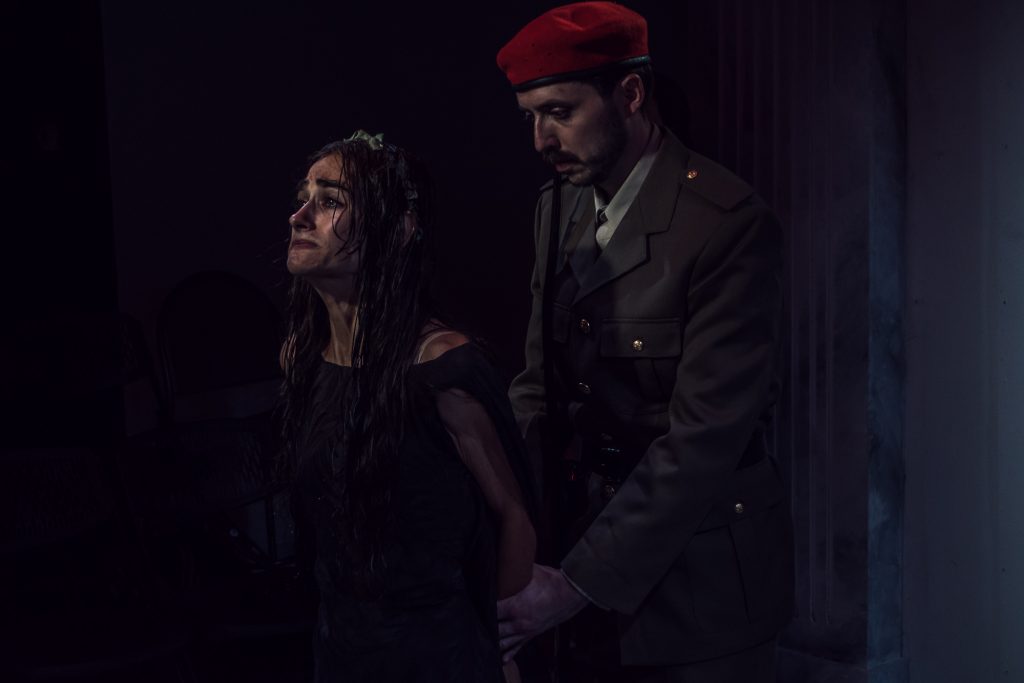 It is a very superficial criticism which interprets the character of Creon as that of hypocritical tyrant, and regards Antigone as a blameless victim. Coarse contrasts like this are not the materials handled by great dramatists. —George Eliot

Writing in the 1850s, British novelist George Eliot cuts right to the essential reason why Sophocles’ “Antigone” is still performed—and still relevant—almost 2,500 years after it was composed. Rather than “coarse contrasts,” the play offers subtle symmetries, richly drawn characters, deep insights and potent conflict not exactly between right and wrong, but rather between two diametrically opposed concepts of law, ethics and authority. Eliot describes the play’s action as the “antagonism of valid principles.”

“Antigone” is perhaps the oldest depiction we have of civil disobedience, focusing on the tension between the state, as embodied in powerful Creon, King of Thebes, and the individual conscience, in the person of his strong-willed niece, Antigone. The two forces come together in a clash that still resonates as the antagonists, each convinced of their absolute rightness and unable to compromise or coexist, move inexorably toward mutual destruction.

Redtwist’s compact,seventy-five-minute production, directed by Christine Freije, captures the play’s headlong momentum and intensity, but sacrifices some of its complexity, with Creon presented as a Putin-like despot and Antigone as a youthful protester, heroically resisting an authoritarian regime. As a result, a play full of gray-toned ambiguities, many of which are enunciated by the cautious and thoughtful chorus, tips toward black-and-white melodrama.

As the play begins, Antigone—incestuous daughter of Oedipus and his mother Jocasta, Creon’s sister—is telling her timid sister Ismene (Natalie Welber) that Creon has ordered that the bodies of their two brothers, who have slain each other in a just-ended civil war for the throne of Thebes, are to be given very different treatment. Eteocles will be honored as a fallen hero, with a full funeral. But Polyneices, who has been designated as the villain, will go unburied, his corpse left out as food for scavenging dogs and vultures. According to ancient Greek religious belief, this means his soul will not find rest in the realm of the dead.

For Antigone, who is engaged to Creon’s son Haimon (Nick Shank), the thought of her brother being stripped of dignity in death is intolerable. Ignoring her sister’s entreaties, she goes off to perform the funerary rites in contravention of her uncle’s orders, which have been issued as a warning to other potential “traitors.” Caught by a clownish soldier (Peter Ferneding), Antigone refuses to apologize or back down, claiming she is following the will of the gods, which supersedes human law, and that obligations to kin trump those owed to the state. The imperiously macho Creon, resolving to “never be bested by a woman,” counters the rigid moralism of his niece and soon-to-be daughter-in-law with his own arrogance and stubbornness, based on his belief that civil peace and social harmony depend on strict obedience.

Whipping each other into a frenzy of self-righteousness, the two set in motion a chain of violence and suffering. Even the intervention of the chorus (played by Andrew Bosworth, Sarah Sapperstein and doubled cast members) and the blind seer Teiresias (Javier Carmona), both of whom urge moderation, cannot save Antigone, Creon and those they love (including Creon’s wife, Eurydike, played by Joan Nahid) from the consequences of their unbending pride.

It’s a splendid story, but the production is a mixed bag. The strong, modulated performances of Redtwist veteran Brian Parry as Creon and of Bosworth as the philosophical chorus leader are not matched by Isabel Alamin’s over-the-top portrayal of Antigone, which conveys not so much inner strength as drama-queen grievance.

Eric Luchen takes credit for the set, which consists of a couple of colonnade-like gateways framing the miniature stage and very little else. More interesting is Solomon Weisbard’s sound and lighting design. The show opens with a background rendition of “You’re a Grand Old Flag,” producing a mood of hyped-up patriotism, which soon shifts into darker territory thanks to a multicolored array of fluorescent lights. There’s a distracting randomness to Anna Bodell’s costume design, which ranges from Antigone’s ratty grunge-punk getup to Creon’s power suit and toga hybrid to Haimon’s odd, camo-colored outfit, which suggests a Periclean-era leisure suit.

The 2015 translation by Canadian poet and classicist Anne Carson is idiomatic to a fault, sometimes getting in the way of the playwright’s majestic verse. At one point, the impatient Creon orders a cringing underling to open up about the forbidden burial rites he has witnessed, crying, “You goat’s anus–talk!” I could see bawdy Aristophanes writing a line like that… but stately Sophocles?

In her program notes, director Freije describes Antigone as “a young woman agitating for the future.” I would argue that it’s Creon, with his remorseless rationality, who stands for the future, and Antigone, with her championing of the old religious beliefs, who is set in the past. What’s more, this interpretation is dramatically limiting, treating Antigone as a personification of anger and defiance, a one-note pain in the polis. This is how Creon sees her, but the audience should not.

In our own era of not just creeping but leaping authoritarianism, culture wars and polarization, “Antigone” serves as a warning about what happens when society breaks down and people can no longer communicate: force and violence on the one hand, and extremism and self-certainty on the other, take command. At one point, Haimon tells his father, “No single human being has perfect knowledge. No city belongs to a single man.” As democracy becomes more and more embattled, this sentiment needs to be taken to heart.