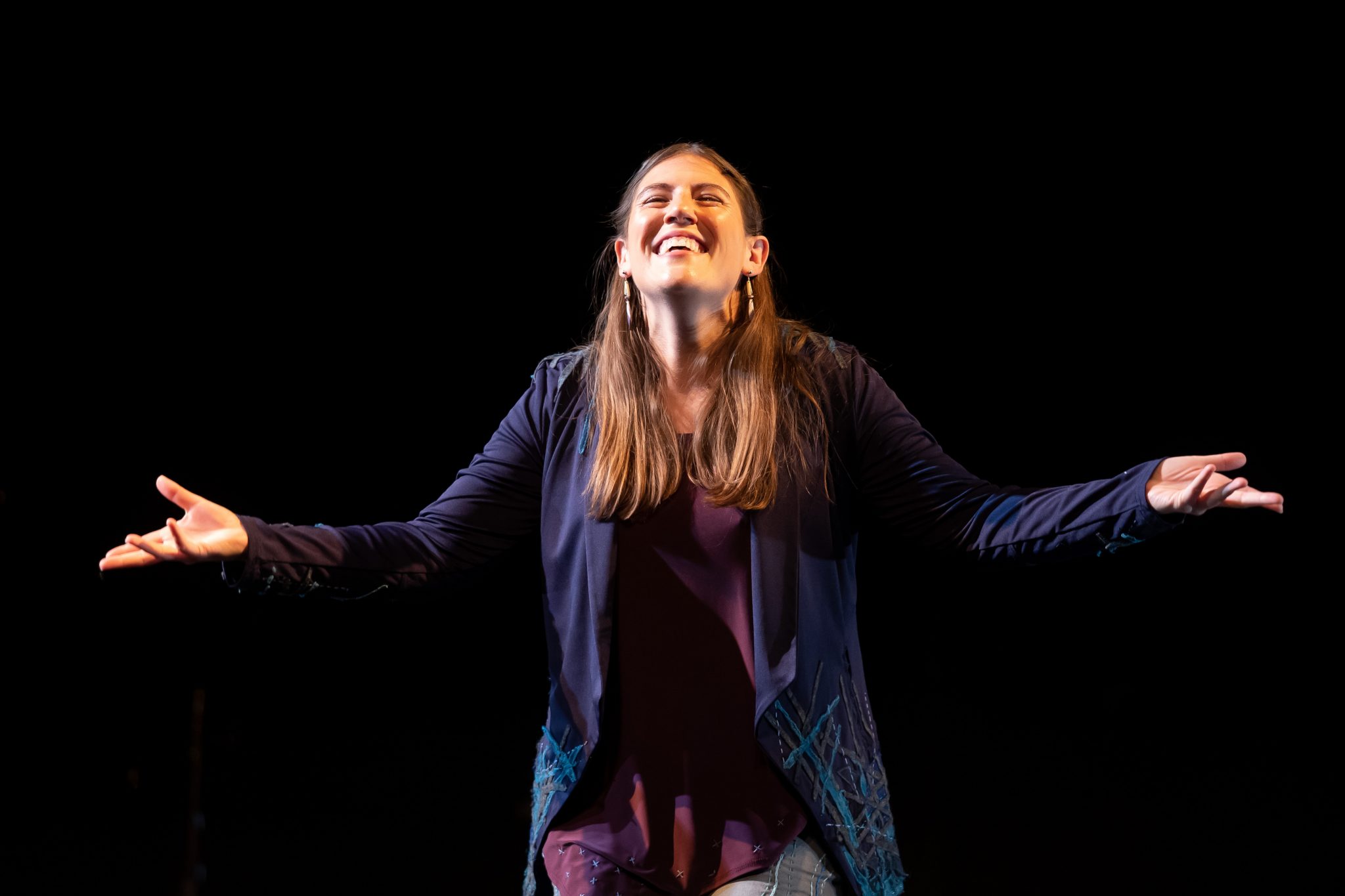 Many local cultural events in Chicago now begin with an acknowledgement, often prerecorded, that the land where the event takes place—the land where the audience is sitting—is the usurped homeland of indigenous peoples. It reminds us, too, that Native Americans are not gone from the city and a large local population still engages with their traditions and urban life. A busy culture-vulture will hear the pronouncement often and may become inured to it. That is, until it is spoken live, on stage, by Madeline Sayet, the Mohegan writer-performer whose autobiographical one-woman show, “Where We Belong,” is at the Goodman’s intimate Owen Theatre.

The Mohegan people (not to be confused with the Mohicans) are still centered around their homeland in Connecticut. Sayet’s great-aunt founded the Tantaquidgeon Museum in that state in 1931. Her mother pushed the U.S. government to recognize the Mohegan as a tribe, an effort that required compiling exhaustive genealogies. Historic connections and continuity mean a lot to Sayet and her people. So when Sayet emerges onto her set, a serpentine mound of earth onstage and a celestial array of lamps above, and walks upstage to acknowledge the legacy of local tribes, “Where We Belong” is already a tour de force. The performance grows even better as she delves into the travels she made, presumably in her twenties, which connected her personal history to her people’s past among the vanquishers and to their vital present, in part by digging deeply into the work of Shakespeare.

Sayet is an engaging storyteller who crosses several worlds. In the spirit world, her physical grace conveys the bird that is her inner spirit. Indeed, she declares that the play isn’t about Shakespeare, and isn’t a traditional Mohegan story. It is about how she became a bird. But she delivers a good dose of Shakespeare and Mohegan stories to get there. As she crosses borders, from the United States to Sweden, and most notably to the United Kingdom, where she moves in order to research the Bard and work toward a Ph.D., she takes on the voices and affects of the mostly well-meaning but culturally clumsy characters she meets along the way. Her own character in the play is a person filled with a scholar’s critical sophistication wed with youthful wonder.

For Sayet, Shakespeare’s poetry and the seeming completeness of his human understanding fill a void left by the near death of the Mohegan language. She believes her ancestors’ native tongue could have served to express her condition had the language survived, but now Shakespearean verse is a surrogate for the language that she will never fully have. Sayet also finds in Shakespeare a stealthy anticolonialist who grasps, and articulates, the otherwise unspeakable horrors that stem from the urge of one people to dominate others. It’s not a crazy notion. After all, before its days of overseas empire, the British Isles were colonized by the Romans and the Normans; Scotland, Wales and Ireland were colonized by the English. Shakespeare’s histories and tragedies run thick with usurpation. Caliban, the half-human being in “The Tempest” intrigues Sayet. (The play may have been inspired by the tales of early travelers to the New World.) Like a colonized tribe, Caliban is deemed monstrous by those who want to enslave it but can’t speak to it until Caliban is taught the conquerors’ tongue. Sayet’s academic advisors see she’s onto something. Sayet takes part in real theater, too. She directs a Shakespeare play on her own terms. She is the first Native American to perform Shakespeare in the U.K. In others’ shows, she battles against the semi-wokeness of directors and their cringy, clueless tokenism.

Her own faith in Shakespeare’s anticolonialism weakens, too. It throws her into crisis.

In her anomie—an occupational hazard for grad students—she stumbles into a London graveyard. There she finds an inscription on a stone that pays tribute to a Mohegan sachem (high official), who traveled to England in the early eighteenth century to petition the king—his presumed equal—to keep a treaty obligation, but was never granted an audience. It’s a marker, not a gravestone. Her ancestor is one of many in an unmarked grave and thus his remains cannot be returned to his Mohegan descendants in Connecticut. Sayet will eventually finish the tale on how she becomes a bird, but offers a treasure of intriguing history along the way. The grave leads her to the British Museum. There she hears the infamous ways in which the institution stonewalls people from the other cultures whose artifacts the museum claims to safeguard. A smug curator tells her the museum doesn’t just refuse to return artifacts, it also hoards the remains of 12,000 humans (the museum official admits to 6,000), many of them North American. “Everyone freaked out when they thought Shakespeare’s head was missing,” she says, “but no one cares about Native bones.” From the view of a people, such as the Mohegan, who regard remains as hosts to spirits, the museum is an abomination. And for Sayet, the visit is one of the highest dramatic notes in her show. Of all the strange customs, she says, the strongest of all British customs is how they distance themselves from colonialism. It’s a moment of deep melancholy. Sayet does not let it linger.

“You do not get to remember me as sad,” she declares. Moving into the final chapter of her conversion into a bird, her show takes on a magical quality that mixes movement, and even Sayet’s fine singing. (More please!)

This show is a powerful dramatic monologue, full of joy, wonder and intelligence that miraculously also connects a people who fought back a forced oblivion to those of us who sit in seats in theaters on sites within the traditional homelands of the native peoples who are very much among us.

“Where We Belong” is at Goodman Theatre, produced in association with Folger Shakespeare Library, through July 24.