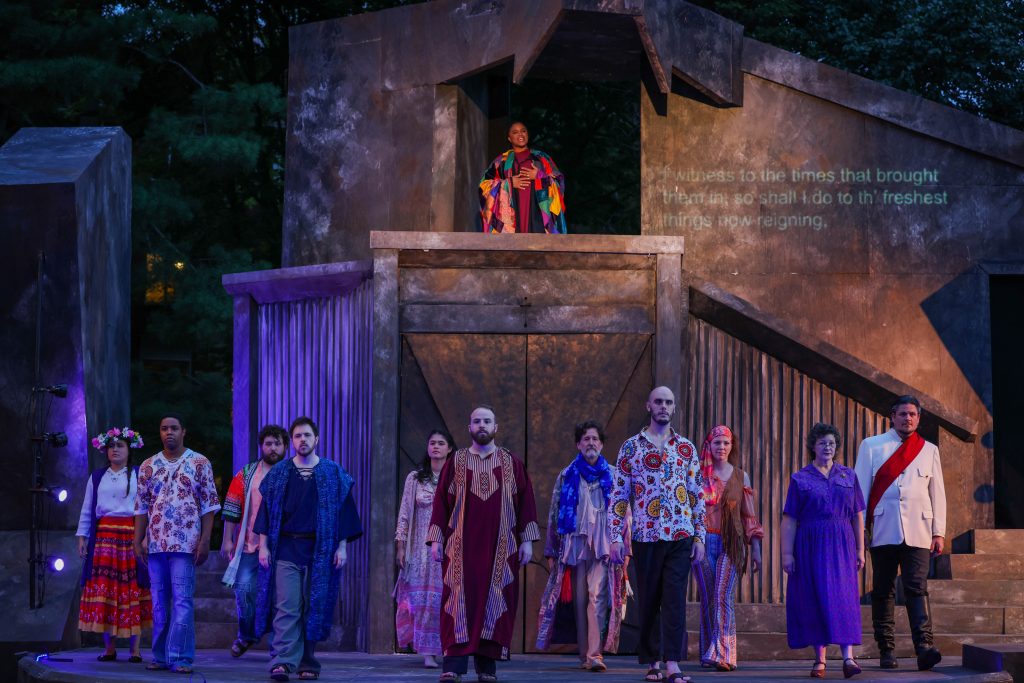 Well-cast and imaginatively staged by adapter and director Kevin Theis, Oak Park Theatre Festival’s telling of “The Winter’s Tale” is a consistently engaging and occasionally enthralling way to spend a midsummer evening. The outdoor production has its slow spots and rough patches, but it captures the unsettling strangeness of this late Shakespearean romance, which veers recklessly between comedy and tragedy and ends in a kind of Elizabethan magical realism, stretching the viewer’s suspension of disbelief to the breaking point.

Narrated by the motley-clad figure of Time (Song Marshall), who offers a florid apology for the sixteen-year gap between Acts III and IV, this is a play of extremes and implausibilities. It’s as though the aging Bard, having spent a career thinking up sensible narratives and lucid motivations, decided to toss all audience expectations aside and concoct a play out of surreal plot points, unrestrained melodrama and masque-like spectacle. With “Winter’s Tale,” Shakespeare pulled out all the theatrical stops, and a successful stage version must be bigger than life and more outlandish. To this production’s credit, there are moments when it all comes together, and the play attains a dream-like wonderment or nightmarish horror, its fairy-tale vision of courtly intrigue and pastoral idyll melding into the beautiful wooded setting of Oak Park’s Austin Gardens.

The story concerns the triangular relationship of the unstable King Leontes of Sicilia, his loving and unjustly persecuted wife Hermione, and his boyhood pal Polixenes, King of Bohemia, who is visiting Sicilia as the curtain rises. A clever opening dumb show depicts the planting of the seed of doubt in Leontes’ mind about Hermione’s faithfulness, as she shows Polixenes the warm welcome owed to an old friend and royal guest. We also see a younger Leontes dallying with another woman, suggesting that his unwarranted jealousy may be the projection of a bad conscience. Once the green-eyed monster gets hold of Leontes, it becomes a personality-devouring obsession, rupturing relationships with family, friends and counselors, and leading to the death of innocents. There’s not much comedy in the first half of this two-and-a-half-hour show (including intermission). The tone grows steadily darker as the sun sets over designer Ryan Fox’s abstract set, whose sculptural contours evoke everything from throne room to wild seacoast to rural cottage.

In modern terms, Leontes has become a conspiracy theorist, wedded to his paranoid conviction of his queen’s cheating and best friend’s betrayal. There’s no evidence for any of it, but to dare point this out to the king is to become part of the plot, whose undisprovable logic resembles “Pizzagate” or the “stolen” 2020 election.

Unlike many of today’s wingnuts, Leontes is capable of acknowledging and repenting of his error. He does so after having sent his newborn daughter Perdita off to the wilderness, as punishment for her supposed illegitimacy. Perdita ends up in Bohemia, to be raised by shepherds and eventually courted by Polixenes’ princely son, Florizel. Bitter conflict, sadness and death segue into marriage and reconciliation and the promise of new life, capped by the most unlikely of Shakespeare’s (or maybe any playwright’s) endings, involving a statue coming to life, in the manner of Pygmalion’s Galatea. This miracle isn’t explained; it just happens, and we must accept it, perhaps as a symbol of nature’s mystical powers of rebirth and regeneration, and of humanity’s capacity for spiritual regeneration. Or maybe it’s just Shakespeare showing, in his late-career way, that the stage is an enchanted space, capable of anything, and the playwright is a sorcerer.

It’s the female leads that give “Winter’s Tale” its oomph, and Rebecca Swislow as the wronged Hermione and Barbara Zahora (who also serves as the troupe’s artistic director) as gadfly courtier Paulina, deliver strong, highly charged performances, radiating a moral confidence and clarity that are equal and opposite to Leontes’ brutal, pigheaded selfishness. As Leontes, Mark Lancaster is all restless energy during his psycho-jealous phase, pacing the compact stage like a caged animal. But his later regret is underplayed; he seems too normal and not crushed by self-doubt. The other members of the seventeen-person cast carry off their parts well, especially Georgia Dib as Perdita, nature’s own perfect princess, and Brian Rooney and Dylan Baxter as the play’s comic relief tag team, one playing a musical con artist, the other his cheerfully naive mark.

Serious kudos to Julane Sullivan’s inspired costumes, turning the naturally honest and trusting country folk (led by Claire Yearman)—whose manners are in sharp contrast with the stiffness and artificiality of the court—into Haight-Ashbury-era hippies, aflame with garish, clashing colors. The biggest chuckle of the evening is the transformation of the staid Polixenes (David Gordon-Johnson) and his counselor Camillo (North Rory Homewood) into shade-bedecked, rough-bearded ZZ Top lookalikes, the better to spy upon the AWOL Prince Florizel (Brian Bradford).

A sticking point in any version of “Winter’s Tale” is the staging of its infamously daunting stage direction, “Exit, pursued by a bear.” It’s a serious incident in the play, marking the horrific death of a character who deserves better, but it’s almost impossible not to play the moment for laughs. Thanks to Fox’s ingenious set engineering, combined with Liz Cooper’s lighting and especially George Zahora’s sound design, the scene is genuinely frightening, as the bear’s savage pounce is only suggested and not literally depicted.

There were technical glitches in the show I saw—some microphone issues and a (useful) superscript that disappeared during much of the second half—but they didn’t significantly detract from the experience, which is one of trippy, flower-child fantasy mingled with outraged indignation at the depths of human—and more specifically, patriarchal—vindictiveness and cruelty. While much of “Winter’s Tale” has a once-upon-a-time quality, Leontes’ intense distrust of female sexuality and personhood is altogether too relevant to our post-Roe v. Wade world. Sadly, misogyny is no fairy story, and Hermione’s trial has echoes of our own Supreme Court, which after all these years still finds women guilty of existing outside of total male control. (Hugh Iglarsh)