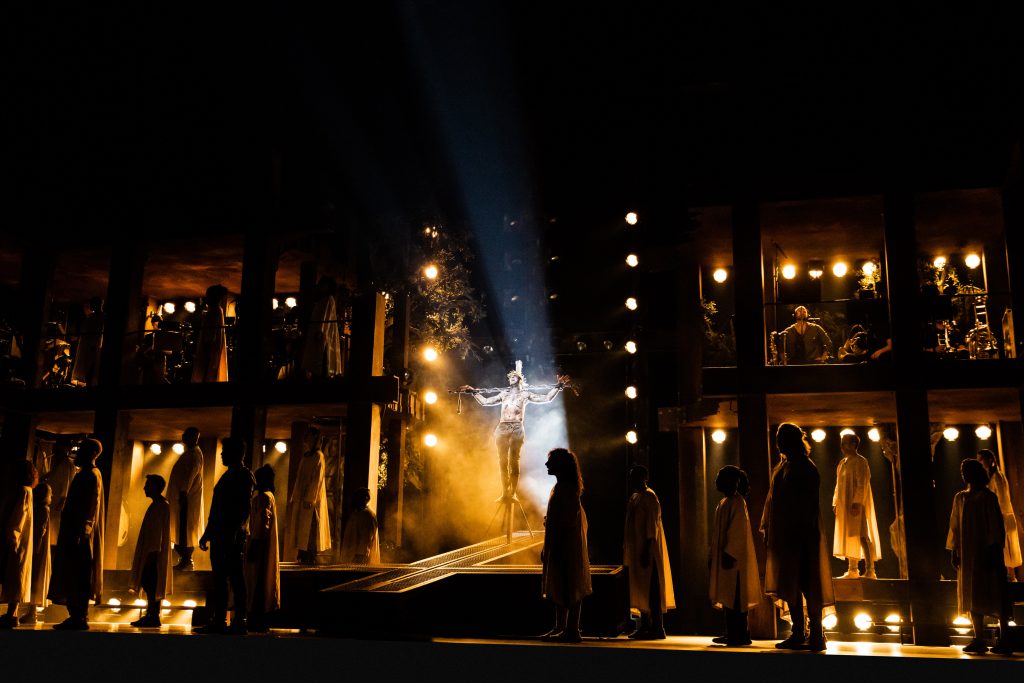 Despite the title, from its original 1970 double concept album to a range of stagings and a film version, “Jesus Christ Superstar” has always been “Jesus Mania” as viewed from the perspective of Judas Iscariot. As such, Jesus as a character can become prop-like, similar to the faceless, distant Jesuses of many classic biblical films.

Dubbed a rock opera by composer Andrew Lloyd Webber and librettist Tim Rice, the fusion of music and words in “Superstar” is so unified that its unfolding of the last week of the life of Jesus has never needed much staging for the story to be conveyed. When Lloyd Webber was complaining about the original Broadway version, the film and various stagings in a 1987 interview we had, I suggested aloud if the problem might be that the work is not so much an opera as an oratorio or a Passion. Peter Sellars and a handful of contemporary directors aside, it is more an exception than the rule to see, say Bach’s “St. Matthew Passion” staged.

The fiftieth-anniversary tour of “Jesus Christ Superstar” at the Cadillac Palace Theatre takes very seriously the notion that the work belongs to the Passion genre. In fact, unlike any previous staging or version thus far, it makes the daring decision to make the crucifixion the climax of the drama. Usually, the title number is the climax: a post-suicide Judas appears in the here and now, Jesus is shown in glory. But the lyrics are actually questions about Jesus, never answers. In this provocative staging, the chorus that asks Jesus, “Do you think you’re who they say you are?” is the same mob that has just tortured and beaten him. And Jesus is shown throughout the song bloodied and disfigured. It is worth noting that the various competing factions of Pharisees, disciples and Romans—who are so distinct in this production that each even have their own choreography—all become unified in their complete rejection and humiliation of Jesus. If anyone thinks this a radical interpretation, read the shortest and earliest New Testament Gospel of Mark, which climaxes exactly the same way.

It is extremely uncomfortable to experience precisely because we get a small sense of what Jesus and any unjust victim of a murderous mob—especially one that includes former allies and friends—has to endure.

Part of what makes the climax so crushing is that we have come to know Jesus (Aaron LaVigne). This is a Jesus with bright eyes and a blonde man-bun who comes off young and naive, at first indistinguishable from those following him. He carries a guitar, as do many of the characters. He’s long and lanky, a tad Pete Townshend-ish. In fact, after one of the most heartfelt and intense traversals of “Gethsemane” imaginable, complete with summoned shrieks and screams, it would not have been a surprise if Jesus had smashed his guitar.

Mary Magdalene (Jenna Rubaii) is given much more to do in this production than usual. Of course, she has the best songs, as always. And hers and those of the entire cast are sung with virtuosity and aplomb. But here she is a full apostle, even present at the Last Supper. That allows her to react to the denial confrontation between Jesus and Judas (Omar Lopez-Cepero) in a direct, visceral and fascinating way.

The ending offers a thought-provoking take on Bob Dylan’s question in “With God on Our Side” of “Whether Judas Iscariot had God on his side?”