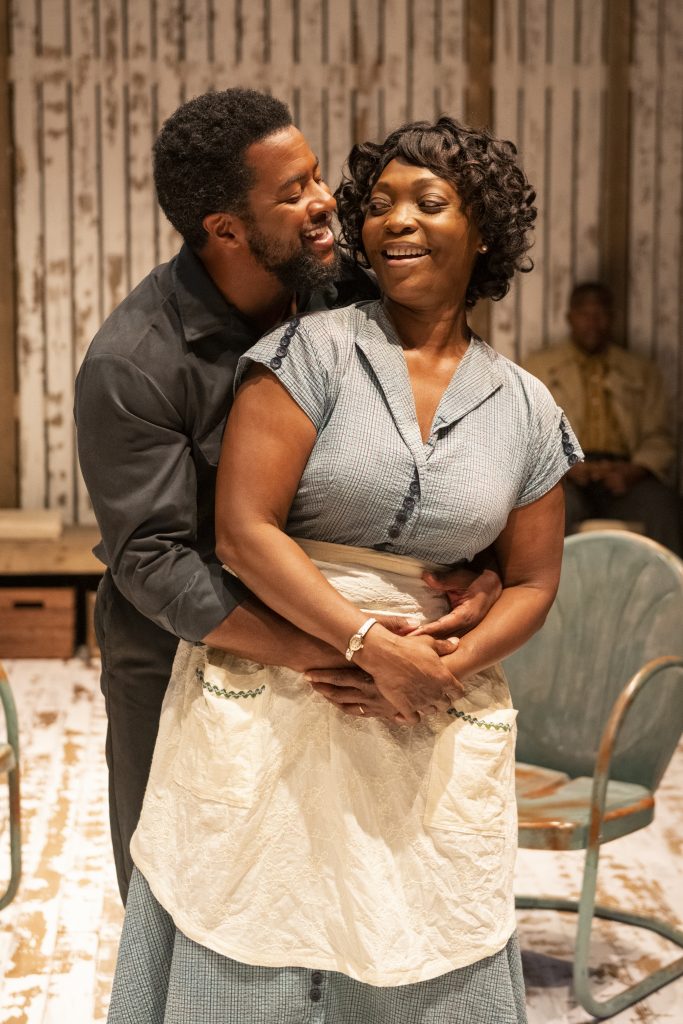 August Wilson said the Pulitzer Prize-winning play “Fences” was his most formulaic. “Fences” is one of ten plays in the Century Cycle that Wilson wrote that follow Southern Black migration beginning in the early 1900s. Wilson wrote a play for each decade, including “Gem of the Ocean,” “The Piano Lesson” and “Radio Golf.” They are set in Pittsburgh, with the exception of “Ma Rainey’s Black Bottom” in Chicago. Denzel Washington has produced two fine adaptations for the screen, “Fences,” which he directed, starring Viola Davis and “Rainey,” starring the late Chadwick Boseman.

I know Wilson’s work primarily through the Court Theatre and director Ron OJ Parson’s (very) large bag of August Wilson “knowhow.” And it is hard to watch “Fences” today without thinking about Denzel Washington and Viola Davis’ portrayal as the Maxsons, but director Monty Cole does a fine job. The modest set design by Yeaji Kim works well and Rick Sims’ sounds certainly fit. Troy’s dance with the supernatural (death) is heightened by both. The players look the part. The volume of Rose (Shanésia Davis) is on fire during her rebuttal. She is wonderful to watch and fills gaps easily. Bono (Martel Manning) is studied, and Gabriel (Manny Buckley) moves the story. He’s good. Kamal Angelo Bolden is not Denzel Washington. He doesn’t need to be: He is good-looking, powerful, and there are years on his expressions, but he lacks the battle scars of age. And for Troy Maxson to truly come to life, that is needed. Bolden would have been a great Cory. The ensemble as a whole matches the conflict-laden script. At each turn there is another problem, another climax. At one point Rose says to Troy she never wanted to raise a family of “half-this, step-that” because she grew up in a mixed family line. But at the end you see all three of Troy’s children, all three from different mothers, and you know Rose will continue on. America’s story is Rose and Troy’s contradictions. Watching Monty Cole’s version, I can’t help but think this is America’s story and that August Wilson is one of America’s greatest playwrights.

The fifty-seven-year-old Troy Maxson was born in the South. His father was first-generation reconstruction slavery—that means he was a farmer but owed the land owner. Farming was hard. Southern bigotry was at his family’s doorstep. Troy’s father had eleven children. Troy’s mother left when he was eight. His father almost beat him to death when he was fourteen. He WALKED north to Pittsburgh for a better life but found a different form of servitude. He became a thief. He had his son, Lyons. Tried to steal more to feed his new bride and child and ended up killing a man. He spent a decade-plus in prison where he learned to play baseball and he met his best friend Bono. When he got out, he played in the Negro Baseball League and was one of the best hitters baseball had. But he was too early to be a Black man in a white-owned sport. Troy is a contradicting moralist gin-drinking philosopher. Here Bolden’s good looks and deep laugh come to life. He gets away with a lot by smiling. When we first meet Troy, he works on the “rubbish.” He makes seventy dollars a week and is married to Rose, raising his son Cory, a high-school football star. Troy has a hard moral code. He wakes up every morning to do his work to pay for his home, potatoes and lard, gin and the house necessities. He is clued in on what he considers his “responsibilities.” He, however, thinks that the diligence of his own routine and “servitude” allow for his own shenanigans to be justified.

We see Troy at odds with Cory because Troy was passed over in the sports world and he doesn’t want Cory used in the same way. But the heavy hand of Troy is a pronouncement, not a discussion. The father-son relationship is one of the most dramatic story lines in the play—Cory asks why Troy doesn’t like him, and Troy’s response is as hard as marble. It is a response that every son has felt. It is cold. It is hard.

When Troy’s contradictions come to life, Rose gives an earth-shattering soliloquy that speaks to the even greater hardships of being the matriarch of a poor family, “You give Troy, but you take too.” Davis delivers these lines with power, empathy and the hand of god. She is the preacher. Her performance is up to the task.

Monty Cole’s production is a healthy contribution to the August Wilson library, and, more importantly, a recaptured telling of the American dream wrapped in the story of Troy Maxson.