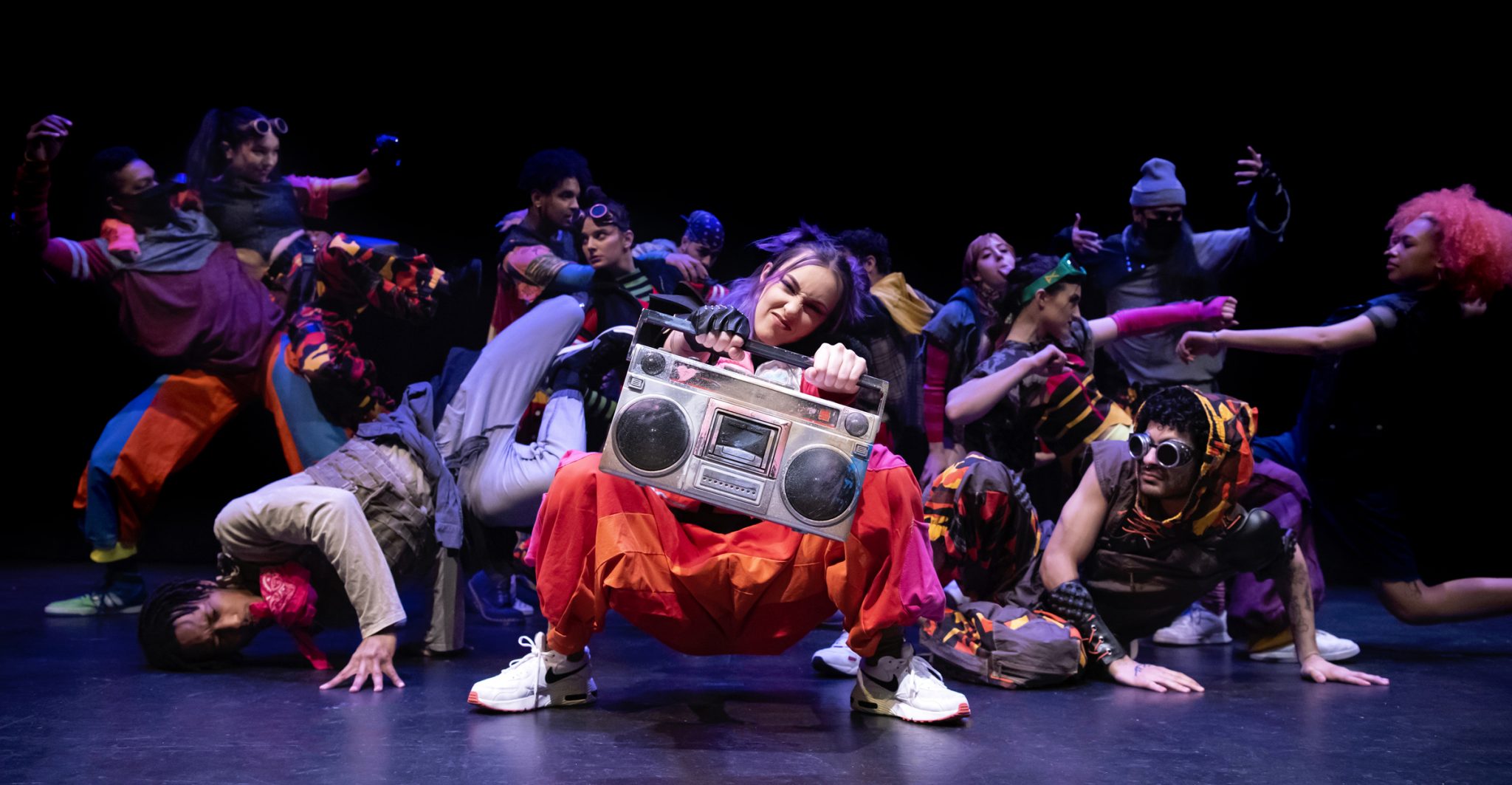 Chicago Dance Crash celebrates two decades of making high-energy performances that blend hip-hop, contemporary dance and storytelling into crowd-pleasing concoctions for all ages. In honor of the landmark, CDC will premiere an evening-length show, “Booms Day,” which follows a young girl and her boombox through a post-apocalyptic landscape as she searches for her family. CDC artistic director Jessica Deahr talked about the making of “Booms Day,” which plays August 26-September 10 at the Ruth Page Center for the Arts.
Tell me about the inspiration for “Booms Day.”

At its core, “Booms Day” is a post-apocalyptic tale, which is always a fun environment to play in in dance. We follow our protagonist on her journey to find her family, as she stumbles in and out of relationships and choices. It takes a look at that cycle in life of peace versus freedom, simplicity versus choices.

Say more about the fun of working with a post-apocalyptic story.

It’s a different reality; stakes are naturally higher, and danger could be around the corner at any time. And, superficially, the costumes and music and the way you can dress the stage is fun to play with. Jeff Hancock is doing our costumes and they look sick.

A lot of collaborators were involved. Talk about the creative team.

It’s been a journey! I’m loving [Archangels Chicago artistic director] Annie Franklin’s material—anything—I’ve seen her in the hip-hop community, on Instagram, teaching classes around the city. I’ve wanted to get her involved in something, but of course the last few years during COVID we were very in-house and we didn’t use as many guest choreographers as we normally would. When we were ready to spring back into it, she was one of the first people on my mind. She’s such a great fit for the company: The physicality she uses and the way her movement comes from inside looks great on the dancers. And then James Gregg is someone I’ve been watching for a while. He used to dance with River North, so a Chicago guy who has always known people in the organization, who has been to our shows. We crossed paths with him at Emerson Spring to Dance Festival in St. Louis and since then it’s been percolating in my brain as well. Me and KC [Bevis], my rehearsal director, we have been working together for years.

That’s the cool part of the other side of our team: Now we have a lot of people that have been doing these productions with us since “Lil Pine Nut” (2019) and “The Bricklayers of Oz” (2017). It’s nice to have this team who gets where we’ve been and what we could do. We have lighting designer Erik Barry, same costume designer, Mark [Hackman] has written some of our shows before. And then there are fourteen dancers—more than we’d do for a typical rep show or a non-anniversary year. It’s been a lot of bodies, a lot of energy in the studio, which has been fun.

I’d say it’s been more collaborative than a lot of other shows, even as far as the movement dancers do on stage. We wanted people to have a voice in how their character moves and moments that are freestyle so everyone is moving as a version of themselves.

Did you design the show specifically for the Ruth Page theater?

We’ll actually premiere the show in Florida, but it was created with the Ruth Page in mind. We often premiere shows there. I like the space and how the audience feels close to the stage. That said, we want it to feel a little different than the usual experience of walking into the Ruth Page so we are going to have Jeff Hancock design some ways to disguise the wings and make them more a part of the world we’re in.

You spoke about the playful take on a post-apocalyptic setting. Tell us a little more about the mood and atmosphere.

A lot has to do with the narrative device we’re using. Obviously the main character is played by a dancer in her twenties, but the tale is told as it’s recalled by a ten-year-old girl. That immediately adds a lightheartedness and a quick pace to it, where she can skip detail. Like someone new walks on the stage and she says, “and then we were best friends,” and we jump into the action. It definitely helps counter the darkness you might think of in a post-apocalyptic story. For instance, the dancers are wearing what you would expect to see post-apocalyptically: Heavy cargo and tactical gear and mismatched functional items, but because we’re seeing it through her eyes, everything is brightly, unrealistically colored, like she colored it in with crayons. And the main character is bringing her boombox with her so some of the music is meant to be played through the boombox. Some of the music is atmospheric electronic music, but the boombox gives us moments that let us bring in, you know, “Let it Whip” and other pop culture references. It’s definitely a mix of high-energy and high stakes. It’s gonna be a fun ride.