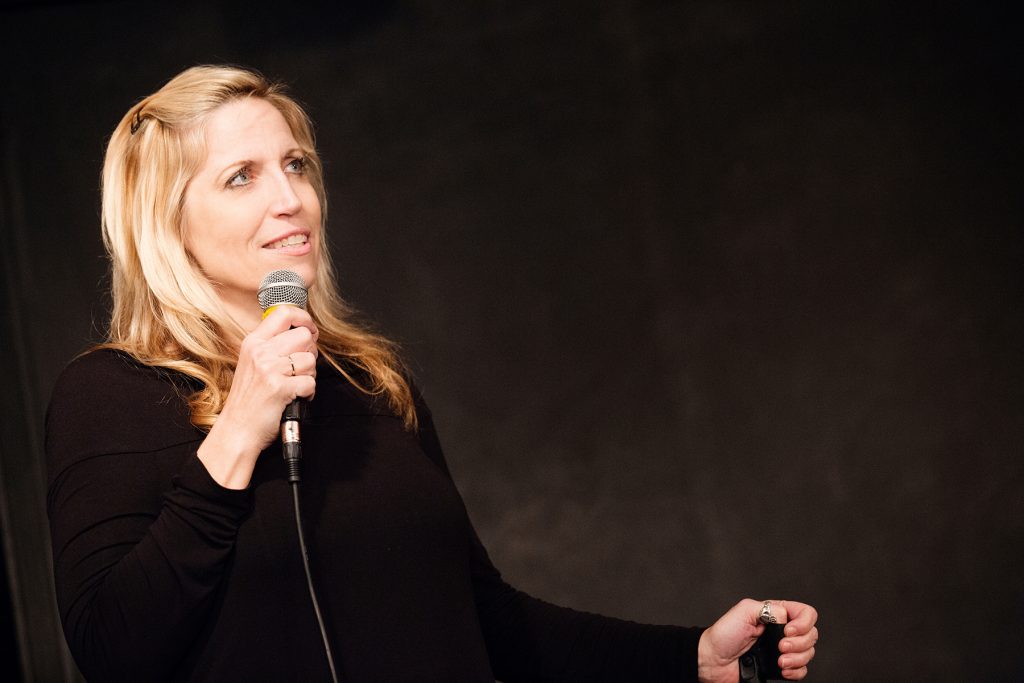 “It’s definitely harder to get a belly laugh off death, but I like to try,” says comedian Laurie Kilmartin. “I always balance the tough topics with easier stuff, just so the audience can rest. Death jokes, dick jokes is my mantra.” Indeed. Whether writing jokes about sex, miscarriage, abortion or her parents’ mortality (both before and after their passing), Kilmartin does it with a practiced precision that’s endearingly disarming and surprisingly hilarious.

And she’ll be back in Chicago for the first time since 2019 this week, for two shows at The Den Theatre on August 13 (7 and 9:15pm). “This is my first time at the Den,” she says. “Every comedian who’s worked it raves about it.”

Ahead of her Chicago shows she answered questions via email from Montreal, where she was performing in the Just For Laughs comedy festival. In Montreal she did a gala set (“I was joking about abortion, and I had to tweak the setups because I was talking to Canadian women, who still have protected abortion rights, about us American women, who don’t.”) and was part of the Living Wake of Bob Odenkirk (“It was a ‘nice’ roast—basically a lot of comics he didn’t know, including me, told him how much we loved him, in the form of insulting jokes. It was LOTS of fun, and he was super cool.”)

On top of being a killer stand-up, Kilmartin is a comedian who seems comfortable in all comedic spaces, having been a late-night writer for Conan for a decade, and written two very Kilmartiny self-help books (“Shitty Mom: The Parenting Guide for the Rest of Us” and “Dead People Suck: A Guide for Survivors of the Newly Departed”) as well as co-hosting the popular “The Jackie and Laurie Show” podcast with comedian Jackie Kashian. She’s also prolific on Twitter, where she doesn’t shy away from controversy or dark humor. (She live-tweeted about her mother dying from COVID in June 2020.)

With an oeuvre full of jokes touching on hot-button subjects and a long history of carefully crafting risky jokes that have to hit their mark precisely, I asked her about the concept of “cancel culture,” a favorite topic for some high-level comedians over the last several years.

“If you do a piece of material that a bunch of people hate, they’re gonna talk about it on social media. That’s what social media is FOR, talking about things one hates,” she says. “If that happens, the comedian has a few options: A) Ignore it; B) Read the criticism and see if it’s valid, then change your jokes (or not); C) Call it cancel culture and sell more tickets. IMO, the rich babies are choosing option C when they should pick A or B.”

In May, Kilmartin had her own “cancel culture” moment when she made a joke about abortion on MSNBC in relation to the Supreme Court leaker, and after Sean Hannity did a segment on her, found out firsthand what it feels like when a lot of people hate a joke. “His fans sent me death threats and nasty emails. However, I was not canceled. I was criticized (by evangelicals and MAGAs). I reacted with option B,” she says. “I read their emails to see if their criticism was valid, and I decided that, no, I am not a slut who should have been aborted. So I DID listen, I was open to critique, and I decided they were wrong, and now I have a chunk of material about how stupid they are. So thanks, dummies.”

Seeing her live in Chicago is a good way to see what that new material is. And, not unrelated, in September, she’ll be performing a five-day stint in Toronto for Just For Laughs Toronto. The title of that run of shows? “Woke Cis Grief Slut.”