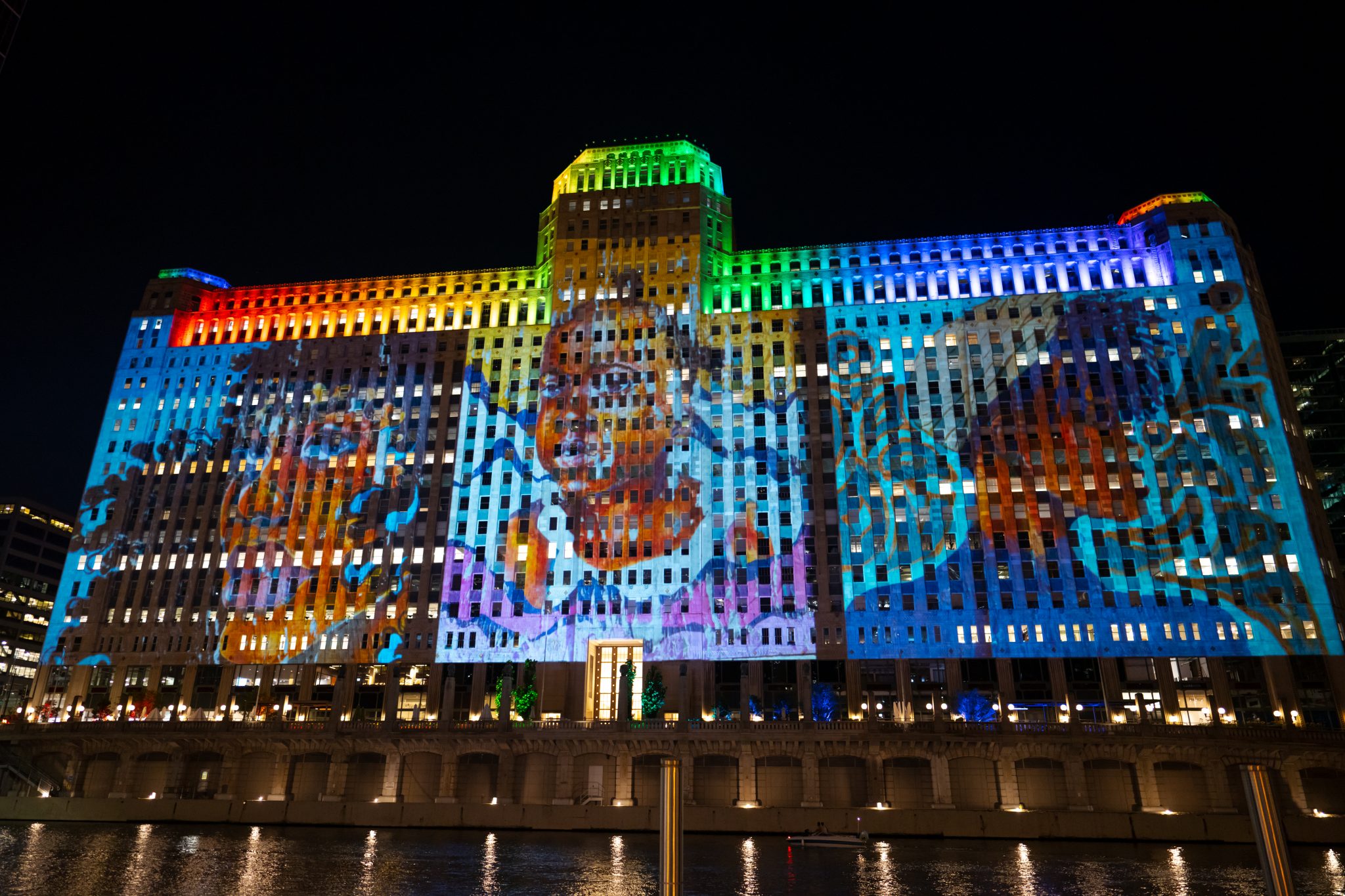 “Trap Moulin Rouge,” by Jasmin Taylor in Art on theMART.

“I want to be clear it’s not a dance video, but a dance projection—three- dimensional, not flat,” says Jasmin Taylor, one of two artists premiering monumental-sized work this week for the fall iteration of Art on theMART: The city’s public art series that transforms the two-and-a-half-acre façade of theMART (formerly and famously known as the Merchandise Mart, since rebranded) into the world’s largest canvas for digital art. Art on theMART is a stunning sight. Breathtaking vistas of luminous, mountain-sized motion can be glimpsed down Wacker, Wells and Franklin Streets between 8:30pm and 9:30pm each night, though the best seat in the house is the Riverwalk, where the opening of Taylor’s piece celebrating the vibrant culture of Black Chicagoans, “Trap Moulin Rouge,” will take place this Thursday. Also opening is Yuge Zhou’s “Love Letters,” which follows two dancers through a city labyrinth to a climactic embrace.

As Taylor notes, the hundreds of windows on the front of theMART add texture to what’s projected upon it, lit rooms punching bright little holes through the images that sweep across the surface. Zhou says the grid of windows were reminiscent of a streetscape, which inspired her to place the two dancers (Rebecca Huang and Joffrey member Xavier Nunez) against an animated, geometric background. “We used the animated background to emphasize the lines of the windows and make the dancers stand out. I had a scene in my mind of the two people moving in and out of fields of fragmented shapes. We shot the dancers in the studios with five cameras,” Zhou says. “My composition in post-production is a second choreographed feat.”

Zhou describes “Love Letters” as her pandemic piece, a story about the longing for human connection and touch in a time of isolation. Much of her recent work, including a new piece opening soon at the Chinese American Museum, reflects the heartache she continues to feel being separated from her family in China due to continued COVID travel restrictions. “Love Letters” is a way of finding connection through creative collaboration. Zhou says the ten-minute piece is also her love letter to Chicago.

“Trap Moulin Rouge” is another Chicago love letter, if of a different tenor. Taylor says the piece is infused with the exuberant fun of the circus, inspired by the creative liberation that flourished in the bohemian heyday of the Moulin Rouge and its parallels to Black cultural history on Chicago’s South Side. Taylor, who owns her home on 79th Street, says 79th is itself a character in the dance film projection. “There’s so much b-roll of community members on 79th Street, people who have been here for a long time, who have seen the changes in the businesses that have gone from open to closing, to the rich cultural history of food, block parties, back-to-school parades, to backyard barbecues.” Taylor says her nail artist, who works at 79th and Kimbark, even makes an appearance.

Taylor says she hopes “Trap Moulin Rouge” inspires visitors to come to the South Side “and recognize the people here are worthy of the same resources as downtown and the North Side, that Black people are a beautiful people and bridge that gap in case there’s any confusion.”