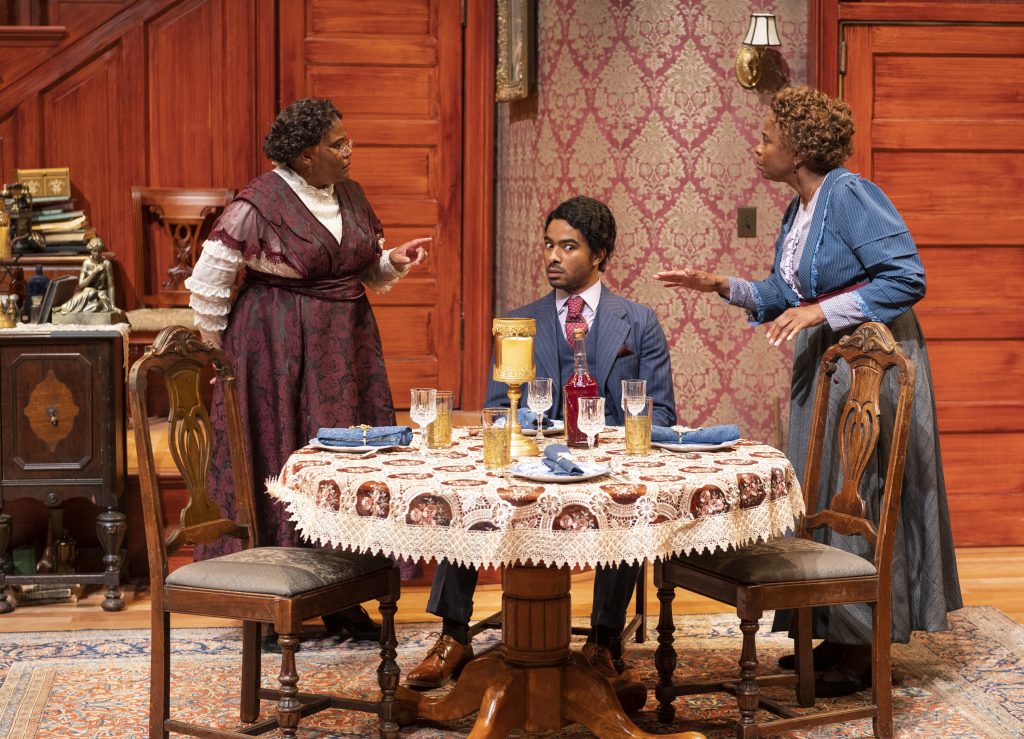 When playwright Joseph Kesselring wrote “Arsenic and Old Lace” in 1939, World War II had already erupted in Europe. Many in the States were taking an isolationist view that America should stay out of the war.

The dark comedy, curiously, originally opened on Broadway in early 1941 and ran right through Pearl Harbor Day and most of the war until after D-Day. The West End production opened in 1942 and ran seven months beyond the war.

As the play opens, sisters Abby (TayLar) and Martha Brewster (Celeste Williams) are fretting with their minister (Thomas J. Cox) over tea and biscuits in their Victorian mansion about the effect that another war could have on their ability to get good flour.

Dictators, wars and world affairs are of little concern, although what Christian denomination one is, that is important. Outsiders and “foreigners” are suspect and a threat. Plays and scary films are as well. Nephew Mortimer (Eric Gerard) is a drama critic, though that is of little consequence as he “hates the theater.” His beat used to be real estate, “which he actually knew something about.”

Another nephew who lives with them thinks he is Teddy Roosevelt (Allen D. Edge) and blows a bugle and charges up the stairs as if it were San Juan Hill. (It’s worth remembering that this was when another Roosevelt was president.)

Homemade soup is given to ailing neighbors. Old toys and outings are given to children. And homemade poisoned wine is given to elderly gentlemen without families who come looking for a room. They are then buried in the cellar with a proper Christian service and flowers are placed on their graves every Sunday.

Another nephew, Jonathan (A.C. Smith), who has been away for twenty years, comes back home with a scary new face, his plastic surgeon (Guy Van Swearingen) and the body of a murder victim of his own. The victim had given them a lift but Jonathan killed him for saying he looked like Boris Karloff. (The role was written for and played by Karloff himself, the original draw of the show.) It is his twelfth victim, a tie with his aunts for those buried in their cellar. The sisters are horrified that a “stranger” has been buried in their cellar.

Did I mention that in this Court Theatre production, the Brewster family happens to be Black? No colorblind casting here. All of the Brewsters—even the ancestors shown in photos on the wall—are Black. Their neighbors, the police, the doctor, Mortimer’s fiancé Elaine (Emma Jo Boyden) and others who come into their home are by and large, white. This was a masterstroke on the part of director and Court resident artist Ron OJ Parson that is very effective. The chemistry of the cast is so extraordinary that we completely buy that this is a truly close family. A dysfunctional family, to be sure, but family all the way. A family that you want to spend time with, you want to be a part of, despite its dark secrets. John Culbert’s set of their home appears so comfortable and welcoming, you want to move in.

The sisters are cast much younger than usual, played as vibrant, middle-aged ladies rather than doddering, elderly ones. Mortimer and Elaine are youthful and shown as truly in love, hardly able to keep their hands off one another. Teddy’s imagination has no racial boundaries, nor do we. Jonathan rides a line between being vulnerable over his looks and being truly monstrous and frightening. Mortimer is a one-man Greek chorus who, through his reactions, takes us to the edge of the absurdity of the action, making us laugh all the more. The proceedings are riotously fast-moving and hysterical, both the lines passing by at the perfect tempo and the physical comedic bits. It is astonishing how relevant, timely, funny and scary this eighty-one-year-old play remains when staged with such tender loving care.