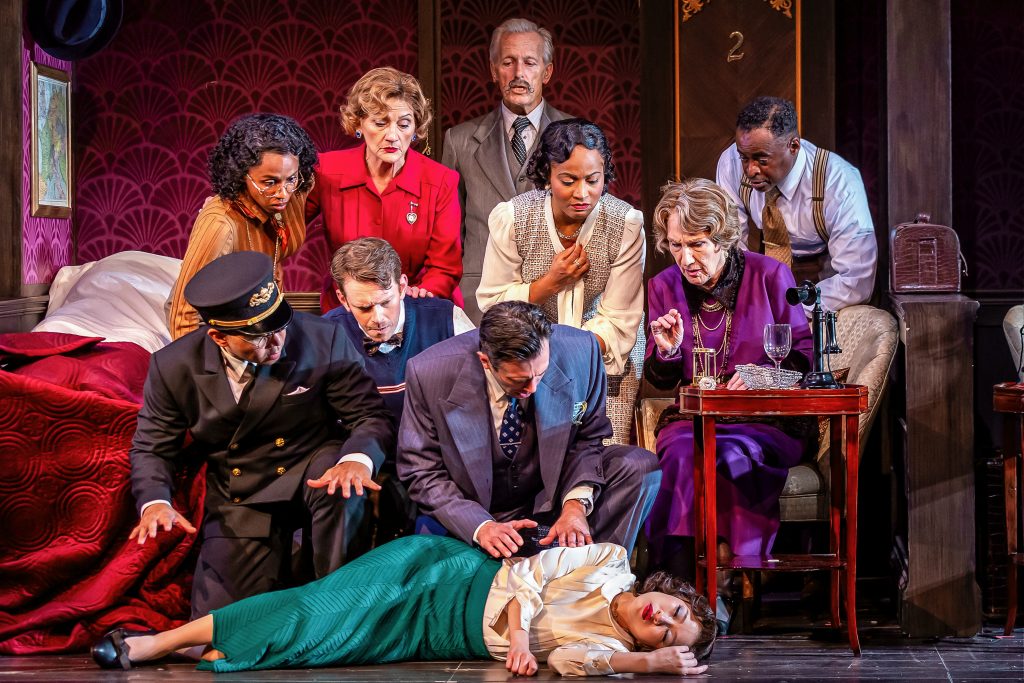 Drury Lane Theatre continues its 2022-2023 season with Agatha Christie’s famous mystery “Murder on the Orient Express,” its second Christie adaptation directed by Jessica Fisch, following last season’s take on “And Then There Were None.”

“Murder on the Orient Express” is an iconic Christie story headlined by Belgian detective Hercule Poirot, a beloved character of fans of both Christie and the whodunit genre. Set in the 1930s, the story finds the mustachioed detective summoned to London by Scotland Yard, and accordingly sets off from Istanbul as soon as possible, aboard the luxurious Orient Express. He wakes the next morning to find that the train is trapped in the snow; a man lies dead in the compartment next to his and a killer might be on the loose.

Playwright Ken Ludwig was chosen at the request of Agatha Christie Limited and its chairman and CEO, Christie’s own great-grandson, to adapt the novel for the stage, and it’s a good match. Ludwig’s decision to eliminate some characters and amalgamate others opens up the story and gives it room to breathe. Characters have been trimmed and consolidated, but the book is successfully condensed into two hours. The script is infused with humor, a welcome addition to a fairly dark tale.

The famed train is brought to life through the production’s rich design, particularly scenic and projection. Of note are designer Anthony Churchill’s projections, beginning with an arresting opening sequence that takes over the stage, to smaller projections of falling snow outside the train’s windows. A revolving stage allows for fluid transitions, yes, but its use in this production actively increases anticipation at every turn, as the audience waits for sets to fully be revealed. Scenic designer Andrew Boyce occasionally reveals transparent panels in select portions of the walls, a subtle reminder that on the Orient Express, not all is as it initially appears to be.

The cast is led by Larry Yando as Poirot. Yando’s Poirot is well-rounded; exacting yet uncertain, charming but blunt, a credit to Yando’s many years in Chicago theater. There are even moments in which Poirot is nearly darling; his joy in the puzzle he’s stumbled into, infectious, despite the macabre circumstances. Janet Ulrich Brooks is a standout as brash American Helen Hubbard, a Midwestern busybody armed with an endless supply of quips. There are also great moments of physical comedy. Keep an eye on Leah Morrow as Greta Ohlsson for her early blink-and-you-miss-it solution to moving a suitcase. Her hallway choreography with Sam Boeck (Hector MacQueen) and Peggy Roeder (Princess Dragomiroff) also earns laughs.

It’s an ambitious task to adapt Christie for the stage. But what should have been some major reveals near the end fell flat. More clarity is needed in a few character relationships to pack a punch, especially for those experiencing Christie’s twists and turns for the first time.

As with many entries in detective fiction, we are walked step-by-step through the final facts. Traditionally a showcase for the actor in the Poirot role, this is a lengthy scene of exposition in which the characters and onlooking audience are meant to sit rapt in wonder at one man’s otherworldly skills of deduction. While Yando does handle a majority of the heavy lifting, everyone gets a moment to shine, highlighting the entire ensemble when it counts the most.

The show closes with a monologue in which Poirot considers the case’s effect on him, and subsequently, his world. Yando’s delivery of these last lines is great. You see that Poirot’s devotion to justice, which had helped him make a career and a name for himself, has now undone him emotionally. We’re reminded that the great detective and his fellow passengers are also only human, a poignant end to a spirited show. Like us, each is shaped by his or her choices, whether great or shameful. It’s complex, chewy food for thought.