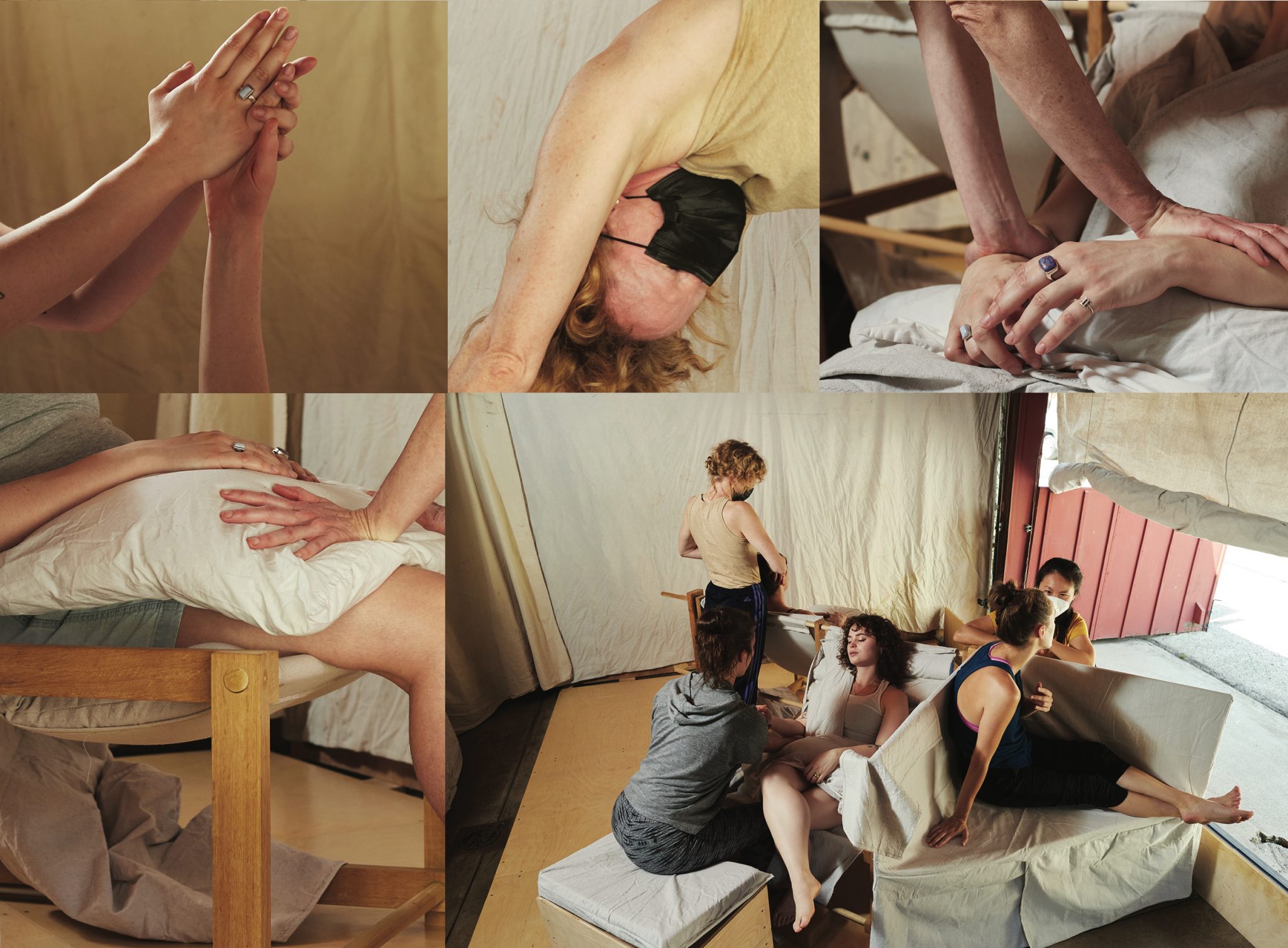 Dance theater is all about people watching other people in motion. For Jonathan Meyer and Julia Rae Antonick, co-executive directors of Khecari, the stationary bodies are of equal importance to those under the lights. The Khecari founders are interested in not just the eyes and brains in those watching bodies, but what happens to all human organisms in the room during a performance, in full.

In our interview about “Vicinity Diptych,” their production which plays through October 15, Meyer and Antonick mused on physiological and philosophical phenomena: Tonic Labyrinthine Reflex (an instinctual flexion and extension response in infants); collective effervescence (a group state of simultaneous elation and ease); and selfhood as a function of emergence. Examples of Khecari’s experiments in propinquity and viewer-dancer dynamics include “Oubliette” (2014), which placed performers in a five-by-eight-foot pit beneath a single row of seats, and “The Retreat: One Week” (2018), which invited audiences to come and go or camp out for an uninterrupted 168 hours. Eating, leaving to use the bathroom, zoning out, falling asleep—it was all part of the show.

Khecari’s first performances in three years are presented as companion pieces developed separately by Antonick and Meyer who, as partners in art and life with limited childcare access during shutdown, took turns working in the studio. Both hourlong performances are presented independently and in contrasting settings—Antonick’s “Tend” in the airy Nature Play Center at Indian Boundary Park, Meyer’s “as though your body were right” in Make Do, a mini theater constructed in the couple’s garage a five-minute walk away—but came out of overlapping lines of inquiry. “I think we were looking at the same thing from two different angles,” Antonick says. “And in some ways they’re so different it’s like they belonged together.”

In creating “Tend,” Antonick says she was interested in the necessity of human touch, and to imagine how a dance appointment could become part of a regular self-care routine. “What underlies allogrooming touch and how it’s been commodified and built into a paid service?” she says. “Is it part of our somatic need?”

“Tend” is part performance, part spa appointment. The two-room Nature Play Center has been outfitted as a soothing wellness center, decked in string lights with plush towels tucked beneath sinks and beside a mod mini-fridge stocked with sparkling water. Attendees are referred to as “clients,” the dancer they’re paired with a “technician.” Because the performance involves touch—light hand, arm and shoulder massage within limits set by the client—booking your ticket involves an online application to gather information on what (if anything) is okay. A separate audience application is required for Meyer’s performance—again for different, but overlapping, reasons. “It feels like a big responsibility to move into [live performance] space again,” Antonick says. “We’re trying to tread with care.” “Tend” clients can also bring a friend to observe for free, who is seated on an adjacent quadrant of a freestanding, four-seat banquette designed by Heather LaHood. Another client (and friend, should they bring one) experiences an overlapping performance appointment on the seats behind.

Writing about “Tend” feels like composing both a performance and Yelp review. I was paired with Gina Hoch-Stall, one of four possible technicians, who walked me through what to expect and confirmed, as I had indicated in my application, I was okay with being touched on my arms and shoulders. We made pleasant small talk until the appointment ahead of me rotated on the banquette. Hoch-Stall then gave me a “no thank you” towel to cover any body part I might change my mind about midstream and led me to my seat. Because this was a dress rehearsal and I hadn’t brought a friend, company member Jamila Kekula Kinney sat shotgun. Rectangular mirrors are arranged on tall stands around the banquette, offering a view of the action behind and around me (but thankfully not of myself), offering multiple angles on a single scene, reminiscent of comic book panels. Hoch-Stall chatted easily as she massaged my hands and forearms, gradually weaving in movement. The conversation dwindled naturally as choreography took the fore.

Antonick tells me that she read a theory about small talk possibly having replaced grooming rituals as a part of the day-to-day social contract; that commenting on the weather could be “the human equivalent of primates picking nits out of each other’s hair.” I like the theory, but as someone whose professional grooming routine is limited to an annual, ideally silent haircut and a writer most comfortable in the seats of a darkened theater, I was nervous about how this audience-client concoction would mix. But my own role and relationship with Hoch-Stall during the performance was effortlessly fluid, a new yet somehow familiar experience. It’s worth noting that all four performers in “Tend” are trained in bodywork or dance therapy. You’re getting an actual arm-and-shoulder treatment—not a performance of one—by a professional. You’re also seeing choreography with professional dancers—they happen to be the same people, navigating an unusual set of shifting expectations with remarkable ease. I don’t know if my appointment achieved the collective effervescence Antonick was seeking, but I left with a notably peaceful nervous system and overall sense of wellbeing.

While “Tend” erases the distance between audience and performer, Meyer’s “as though your body were right” closes the gap as much as physically possible while maintaining the trappings of proscenium theater. “As though your body were right” performances seat an audience of four, who occupy a single row of seats on wheels, which are rolled forward until their faces are inches from a chest-high stage large enough to fit exactly one reclined human body. When the lights go out, the room is cast in pitch darkness until the red velvet curtain lifts.

“There were two seeds early on,” says Meyer of the performance. “Vulnerability and power of the body, and cellular consciousness. We think of consciousness as a function of the cerebral cortex and selfhood as ego. There’s an idea in body-mind centering that we can shift our awareness to the blood or the organs or even the cells.” Meyer concentrates on trying to generate movement at this micro-level, instead of the common choreographic approach of muscle moving bone, a process he calls “‘cellular murmuration,’ like each cell was a bird in a flock.”

The extreme closeness of the audience in “as though” allows the viewer to see the tiny twitches and subcutaneous murmurations of a single performer who remains on stage, fully naked, for the duration of the show. The dancer (Meyer the evening I attended, who rotates with Sara Zalek and Amanda Maraist for eighty performances) is a giant on the tiny stage, moving glacially. It turns out the body as landscape is not a metaphor, but actual terrain for a small creature to live out its multistage lifespan over the course of one human hour. Meyer collaborated with puppeteer Tom Lee to create the small cohabitant of this strange world, controlled by either Arden Lapin or Margo O’Connell behind the beautifully carved rear wall: A spunky little critter who inches, crawls and leaps over its fleshy habitat, occasionally bopping rhythmically to the soundscape by Joe St. Charles. “As though” floods the audience’s field of vision with images strange and charming, cute and creepy, lovely and grotesque: A forest dream of centuries unfolding before eight eyes in a magical corner of a darkened garage.

“Vicinity Diptych” is “Tend” at the Nature Play Center at Indian Boundary Park, 2500 West Lunt, and “as though your body were right” at Make Do, 2210 West Morse, through October 15. “Tend” appointments Thursdays and Saturdays, 1pm-6pm, “as though” performances Thursdays-Sundays, 7pm-8:30pm. Application and tickets at khecari.org/vicinity-diptych.