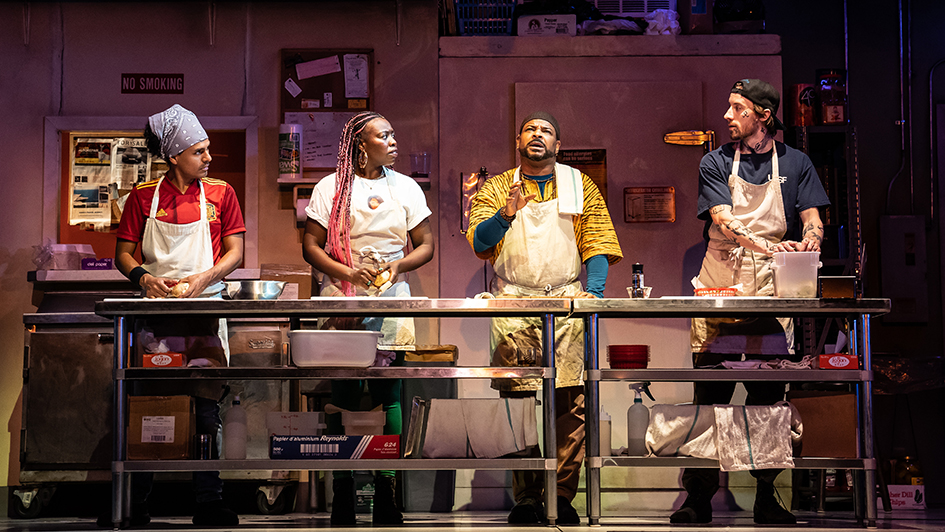 Lynn Nottage sets “Clyde’s,” her poignant, ninety-minute, laugh-out-loud funny play, in a grimy truck-stop diner somewhere near Reading, Pennsylvania. Nottage describes it in the script as a “strange liminal space populated by folx down on their luck and looking for a second chance in life.” The action opens just as Montrellous, a wizard at making tasty sandwiches with novel ingredients, finishes telling a story to Clyde, the sturdy, sour diner owner who never gives her workers credit for a good idea or job well done. Reacting to Montrellous’ tale, Clyde is all vinegar, “So, like, why are you telling me this now?,” she asks with a scowl, “I mean, are you just looking for sympathy? Or what? I’m sorry, I just don’t.” The ice in her veins never thaws. 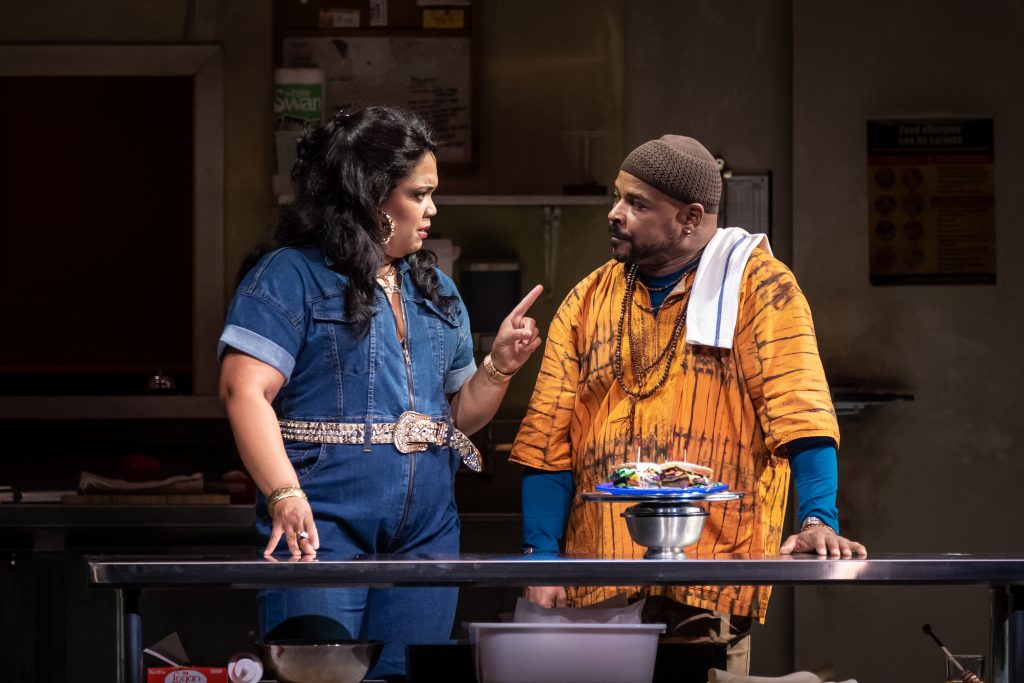 One of the running gags in the play is how fearful the kitchen help is of the formidable boss. All except the serene Montrellous, played pitch-perfect by golden-throated Kevin Kenerly, who teaches his fellow workers that redemption will come when they concoct the perfect combination of bread, meat, sauce and garnish. Like every character in this play, Montrellous is an ex-con. His three fellow cooks rightly sense that the cause of Montrellous’ incarceration was nobler then theirs, though Montrellous himself sees noble possibilities in the others. All the kitchen-worker ex-cons are thoughtful and likable. They include irascible salsa-dancing Rafael, played with adorable pathos by Reza Salazar, who originated the role in its premiere at Minneapolis’ Guthrie Theater. Another is the object of Rafael’s affection, thirty-year-old single mom, Letitia, played sweetly by Nedra Snipes, is a woman who’s half desperation, half percolating hope. A new hire, the copiously tattooed Jason, comes into the kitchen demanding silence, which he needs so that noise and chatter don’t provoke him to do something that will return him to prison. As Jason, Garrett Young is moving as the young man whose well-oiled life went terribly awry and who cannot forgive himself. Nottage masterfully lets her characters’ lives unfold through rapid and lively crosstalk that’s a circus of jokes, jabs and confessions.

On opening night the role of Clyde was covered with fine comic menace by understudy Danielle Davis. Substitutions on opening nights were once rare and the stuff of legend—think “42nd Street”—but lately they have nearly become business as usual. In the COVID era, theater companies have learned that backup casts must be prepared with all the vigor of the main casts and this production has prepped the covers to move in seamlessly. The role of Clyde requires crack comic timing and countless quick costume changes. Davis seemed made for the role. It’s a good thing. One of the key questions the other characters keep asking her and each other is what makes Clyde so darned mean. She offers one answer saying that she’s not mean, she’s in charge. The show is sympathetic to the social quicksand of ex-cons where almost every act or self- reflection has the potential to pull them into the muck. “You know what they say,” Montrellous laments, “‘Cuz you left prison don’t mean you outta prison.” There is plenty to suggest that Nottage is analogizing her characters’ lot to broader conditions under capitalism which trade on the exploitation of a permanent underclass. Nottage doesn’t leave us without hope. At the end of the play, a perfect sandwich sits on the steel prep table in an empty kitchen.