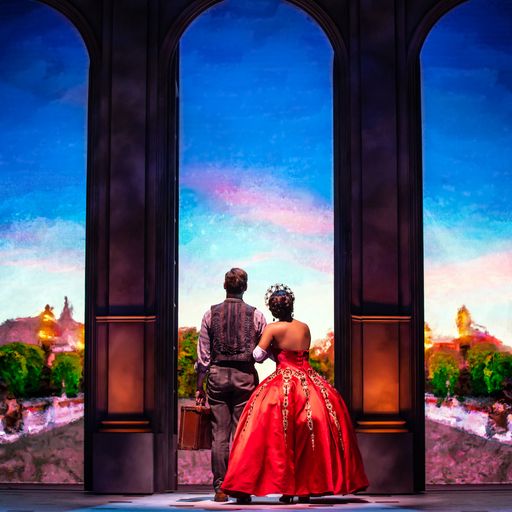 When Marcelle Maurette’s 1952 French play “Anastasia” was first staged, the death of the Romanov dynasty and the birth of the Russian Revolution were relatively recent events, occurring only thirty-five years earlier.

The imaginative “What if?” tale of an amnesiac with a resemblance to the late czar’s daughter who is used by swindlers fired up mid-twentieth-century audiences. There were productions throughout Europe, a British television adaptation, a Broadway run and a 1956 film version that won an Oscar for Ingrid Bergman in the title role.

Through Cold War eyes, royal Russia is romanticized, the revolution a backstory. Skip ahead over four decades to 1997, the story is told in Disney-like form—though actually done by Fox Animation Studios—with Broadway-like songs in a hit animated film only a few years after the collapse of the Soviet Union. Meg Ryan was the speaking voice of Anastasia, Chicago native Liz Callaway her singing voice.

It is that version that became the torso of the Broadway musical that opened on tour at the CIBC Theatre Tuesday night. Terrence McNally wrote the book that is an epic expansion that even includes the royal family and the events of the revolution. There are additional characters and scenarios that provide more historical and dramaturgical context. Rasputin as a sorcerer villain was wisely left on the cutting-room floor.

But the real magic of this show is in the songs by composer Stephen Flaherty and lyricist Lynn Ahrens. McNally, Flaherty and Ahrens are the same triptych who gave us “Ragtime,” and there is a similar feel, albeit with a distinctively Russian flavor. The handful done for the Fox cartoon are kept but there are so many others it is almost a new score. There is an orchestra and chorus and everyone in the cast is a superb singer. There are arias, duets and a spectacular quartet of ballet scenes that incorporates ballet music. Incidental music is used to great effect.

If on the surface this looks like a kid’s show because of the association with the animated feature, “Anastasia” is actually all-encompassing in scope. In one sense, it is a fairy tale. After all, DNA tests have identified  Romanov remains. But it is also a primer on the pros and cons of Russian imperialism versus Russian communism.