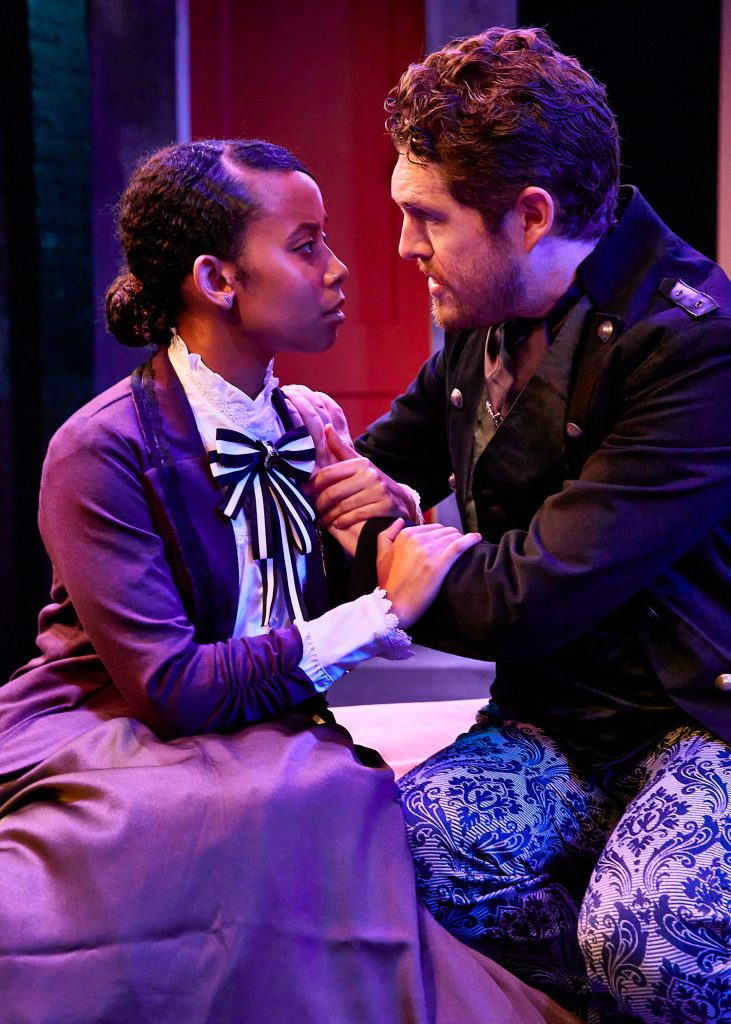 The idea of changing the character of Dr. Jekyll to a woman is so smart that it seems inevitable. What better way to explore the poisonous effects of repression than by making the respectable Jekyll female, with a malignant male Hyde acting out Jekyll’s hidden desires?

Brandi Jiminez Lee plays Dr. Henri Jekyll, a seemingly prim and rational scientist who has recently lost her father, also a doctor, and taken over his practice. We learn that Jekyll, while a brilliant physician, has been denied opportunities because of her gender. Some patients walk away when they learn that the doctor is a she. She has a mysterious patient—Edward Hyde, played with playful, leering menace by Jack Sharkey, who has a key to Jekyll’s rooms and has become her sole heir.

This draws the suspicion of attorney Gabriel John Utterson (Shane Richlen), who wants to romance Jekyll and is jealous of the mystery patient. Long before Utterson, the audience knows that Jekyll and Hyde are the same person—buttoned-up, logical Henri has been drinking a red potion to release Hyde, who commits acts of violence against Jekyll’s enemies. But she is having an increasingly hard time keeping him under control.

In many adaptations of this story, such as the 1941 Victor Fleming film starring Spencer Tracy, Hyde and Jekyll are played by the same person. An exception is 1971’s “Dr. Jekyll & Sister Hyde,” from Britain’s Hammer Films, directed by Roy Ward Baker, that has Jekyll as male and Hyde as female. In the Idle Muse version—Jekyll and Hyde are in the same room together, talk to each other and even caress—Hyde says to think of it as masturbation. They sometimes speak in the same voice. The interplay between the petite, self-contained Lee, who is Black, and the tall, grinning Sharkey, who is white, is both sexy and terrifying—he has the energy and confidence she has denied herself, but he’s an out-of-control, joking, violent mischief-maker. In this alter ego, she sees both liberation and danger.

Lee is brilliant at Jekyll’s transformation. She begins as formal and tightly wound, her costume close-fitted and fussy. As the play goes on, she gets looser—the bun comes loose, her dress becomes more sensual and she sets free her rage.

The problem with this show is its overly complicated plot. We’re given more exposition than necessary about why Jekyll is so angry, and the timelines get confusing. But it doesn’t interfere with the power of the story.

The cast is excellent throughout. As Utterson, Richlen seems sophisticated at the start, but is revealed as a naïf who doesn’t know what he’s up against in Jekyll or Hyde. Hannah Beth Mitchell adds terrific comic relief as the Cockney maid who sees all. The intimate production (just room for forty seats) is enhanced by Stina Taylor’s simple and versatile set and Jessie Gowens’ character-defining costumes, while L. J. Luthringer’s use of modern club music during scene changes adds to the feeling of menace and claustrophobia.