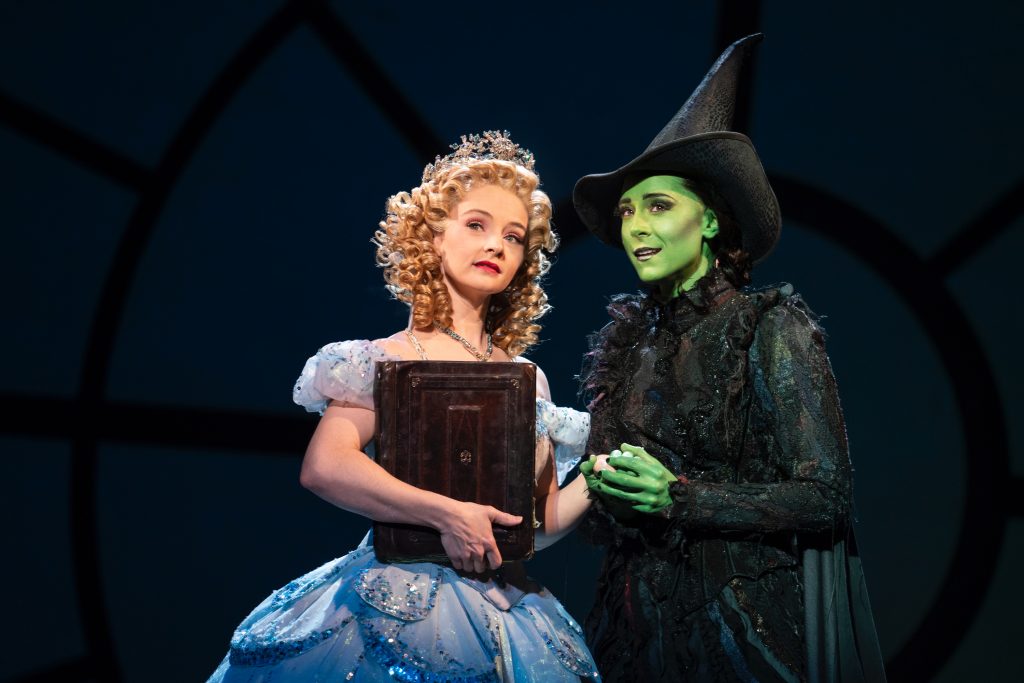 Jennafer Newberry as Glinda and Lissa deGuzman as Elphaba in the national tour of “Wicked”/Photo: Joan Marcus

Need proof that “Wicked” is almost twenty years old? That nearly a full generation has passed since the Great White Way went Emerald Green? Look no further than the seats on opening night at the Nederlander Theatre. Adult women with hankies in one hand and cocktails in the other were audibly and emotionally reliving the empowerment that they felt when they first experienced the show. Meanwhile, young girls were sitting motionless and mesmerized, their eyes as wide as saucers as they took it all in for a first time.

Like “Joseph and the Amazing Technicolor Dreamcoat,” which laid the premillennial seeds for what, in 2000 became Broadway in Chicago, with a fourteen-month 1993-94 run, “Wicked” moved in for what became a record-breaking multi-year 2005-09 run with scattered holiday-season encores.

“Wicked” is above all, an experience, and most that have it want to repeat it: often multiple times. Significantly, it does not disappoint with repetition, but only deepens.

Despite the atemporal quality that “Wicked” exudes, coming back to it is a reminder that it was always a traditional Broadway musical in form. Stephen Schwartz’s remarkably clever and melody-driven songs are character-driven and move the action forward. We feel what they feel. We have empathy even when many Ozians and even the Wizard himself cannot. The one-liners and gags are almost vaudeville-like in their simplicity, although are never oversold. The stagecraft is spectacular and refreshingly non-digital. The same wires that allowed Mary Martin to fly as Peter Pan give us flying witches and monkeys. Oz was always a familiar world for us, so even when the unfamiliar happened, we always knew we were never far away from there being no place like home. But “Wicked” itself has long since entered into the canon of familiar Oz lore, so its many twists and turns are now terra firma.

Yes, the effectiveness of “green” being an allegory for fill-in-the-blank as to whatever one is that the rest of us may not understand or accept remains powerfully in place.

But in what remains primarily a patriarchal culture, the story of two young girls who help each other develop into independent and strong-willed young women that achieve exactly what each other wants is reflective of an ongoing and overdue seismic cultural shift.