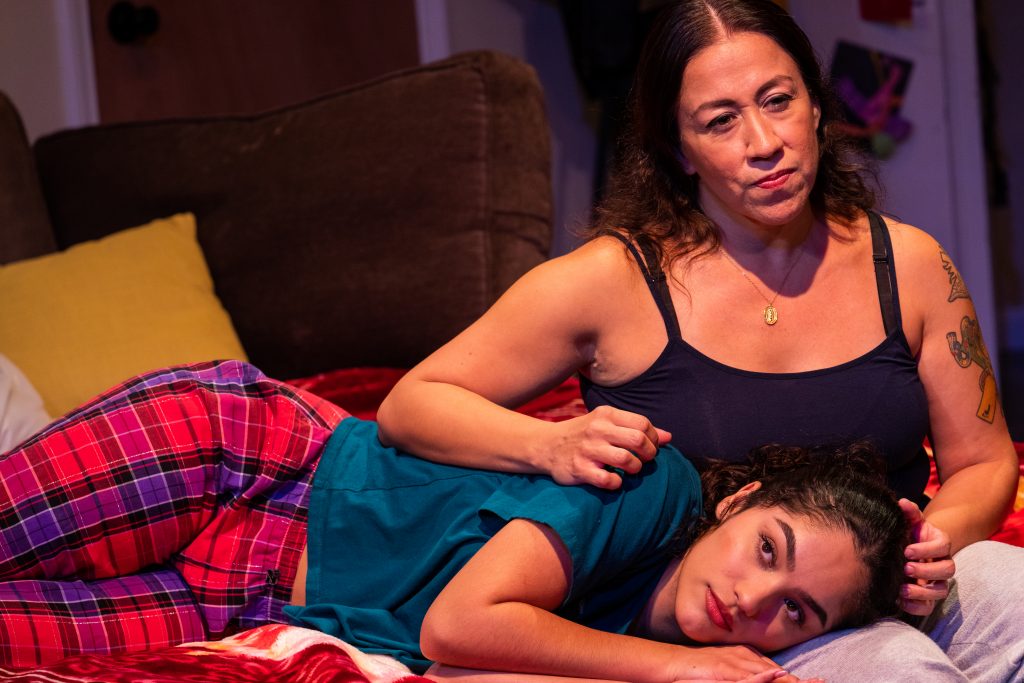 The challenge for any play with even the least aspiration to seriousness is to balance inner and outer worlds, to create multifaceted characters who exist within a plausible and relevant context. Benjamin Benne, the young and talented author of “Alma,” sensitively weaves together the personal and political in his tale of an immigrant single mother originally from Mexico and her rebellious U.S.-born teenage daughter, their mutual devotion snarled by the pressures and contingencies of a pitiless immigration policy. By the end of this one-act, two-person drama, directed with clarity and vigor by Ana Velazquez, the American Dream seems like a weaponized idea, designed to lure good people into making impossible sacrifices.

Taking place in real time on stage, this world-premiere production crosses historical epochs in the viewer’s imagination, thanks to a brief prologue about the play’s southern California setting. Projected supertitles invoke the indigenous inhabitants of pre-Columbian times, eighteenth-century Spanish colonization, the 1846 Mexican-American War, the 1916 Mexican Revolution and finally 2016: the advent of the hate-spewing, wall-building, immigrant-baiting Donald Trump. The MAGA mess is the omnipresent background to this family drama of madre Alma pushing Angel, her bright but difficult child, to take the SAT so she can attend a distant state university and move beyond her mother’s grinding working-class life. Guilt-inducing parenthood meets adolescent attitude as Angel pushes back hard against her mom’s pressure, for reasons that unfold gradually over the course of this seventy-minute show. While the two alternately argue and make up, odd things happen on Tara Houston’s well-executed, hyperrealistic set: the TV turns itself on and off, eventually switching to Trump’s ranting, which cannot be turned off. At that climactic moment, the lights blink out, producing a darkness that is not just physical but also tensely metaphorical.

Jazmin Corona is terrific as Alma (“soul” in English), tough as nails on the outside, but soft as her daughter’s beloved elephant plush toy on the inside. (Elephants, known for their long memory and loyalty to their own, take on symbolic significance.) But it’s Bryanna Ciera Colón who is the revelation here as Angel. Despite her name, the character is no saint, just a girl carrying around more than her share of teenage angst, and Colón, whose youthful vitality conceals the acting chops of a seasoned pro, skillfully evokes the clashing aspects of her bicultural existence. Cycling between brattiness, neediness, fear and sadness, Colón delivers as moving and nuanced a performance as I’ve seen in a long while, capturing the pain and paralysis of a life scenario where survival, not happiness, is the best possible outcome.

There’s much to take in during this tightly focused, well-paced show. There’s Alma’s poignant dream of feathers growing from her weary arms, while her gifted daughter, who won’t take the SAT, frustratingly refuses to take flight. And the insights into the Catch-22 nature of U.S. immigration law, which permits only those citizens who have reached the age of twenty-one to serve as sponsors for their parents—but then claims that because these children have reached adulthood, their immigrant parents are no longer needed in their lives. And then there’s the way Alma’s faith rubs against Angel’s skepticism, producing a numbered list of dreams and ambitions that makes their present circumstances bearable. A materially better future beckons, but only at a soul-crushing cost.

Like all theater companies, American Blues has been affected by the pandemic, and that’s why a play commissioned for a spring 2020 opening at a mid-size venue is being staged in fall of 2022 at the compact Rivendell house. None of this really matters. Our immigration system remains broken no matter who’s in the White House and Alma’s explanation of why migrants crossing the southern border into territory that once was theirs are discriminated against—“We remind them of a history they want to forget”—still rings true.

This is a big-hearted, high-caliber production shoehorned into a small space, and it shows just what storefront theater is capable of in terms of intimacy and impact. It’s not perfect: There’s too much untranslated Spanish in the script for gringos such as this critic, turning too many punchlines into guessing games. But by the end, we feel like we know this family, which is all families, which is our own family. “Alma” has proven well worth the two-and-a-half-year wait. See it if you can. (Hugh Iglarsh)