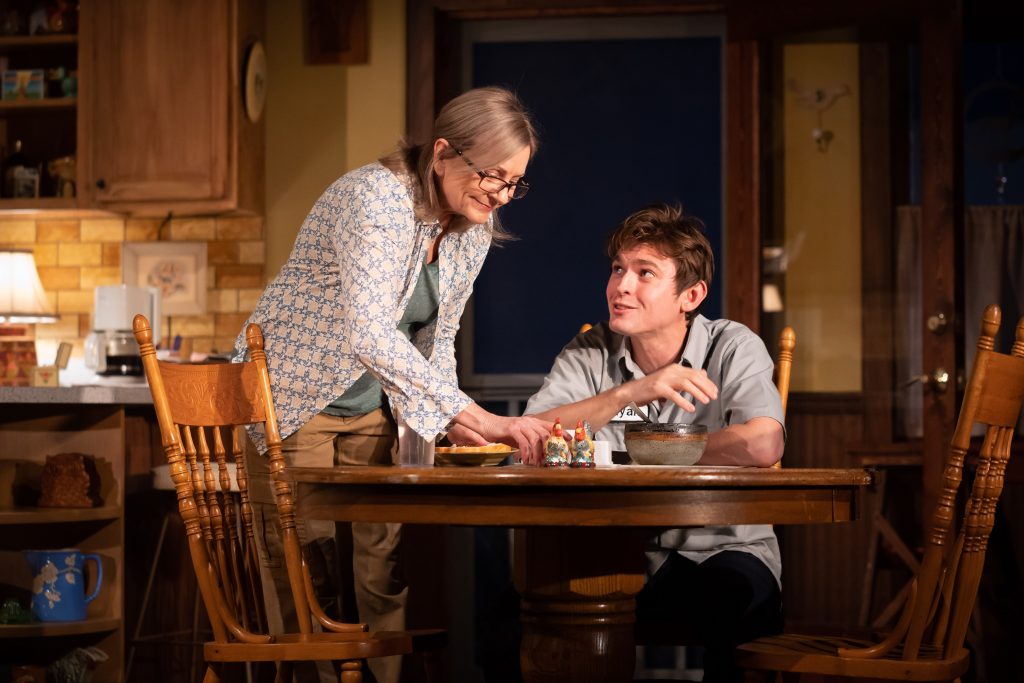 The title and Wisconsin setting of Rebecca Gilman’s “Swing State,” premiering at the Goodman, ups the expectation that the play will dig into the nation’s divides with badger-like ferocity. The promotional material for the Goodman’s season telescoped a plot propelled by a faceless energy giant gobbling up ecologically precious prairie. It seemed timely given the nutty nail-biting national election that will happen during the run and the potential for drama to be wrung out of our neighboring swing state. Add to that, this is the final of six Gilman shows that Robert Falls, who calls Gilman his “real soulmate,” has taken on while serving as the theater’s artistic director. Was it unreasonable to expect that in “Swing State” Gilman and Falls would come out swinging? That they’d take some big risks, twist and challenge our conflicting moral centers, whoop up our passions? Both director and playwright have delivered overtly bruising work together before.

We don’t get an overtly fierce play. The Wisconsin here is the Dairy State, not fighting, but ruminating. What swings aren’t the politics but the states of mind. The play begins in a literally dark, cold place. The first light we see comes through the slit in the opening door of a refrigerator. Peg, a woman of late middle age, pulls out ingredients to concoct a quick bread. She combines them vacantly, with a sloppiness that no woman in command of the neat country kitchen where the play is set would ever show if she were right with the world. She is not. Gilman stalwart Mary Beth Fisher plays Peg, a former high school counselor, with a big dose of Midwestern flatness that masks a deeper flatness inside. Nearly everyone around Peg senses that her vacancy signals that she’s a suicide risk. Three passions give her pause. One is for the birds populating the prairie outside—but they’re being driven to extinction. A fungal plague killing local bats and the “insect apocalypse” weigh on her like The Last Judgment. Another is for her aging dog that sleeps the day away in Peg’s bed and no longer guards her home. Most important is Peg’s affection for a troubled young man, Ryan. Peg and her recently deceased husband had been a steadying and supportive influence on Ryan while he was in prison on a felony assault charge that may have been a bum rap. Ryan now works as a trucker but still finds material and emotional support from Peg, including help avoiding booze and boozing buddies. 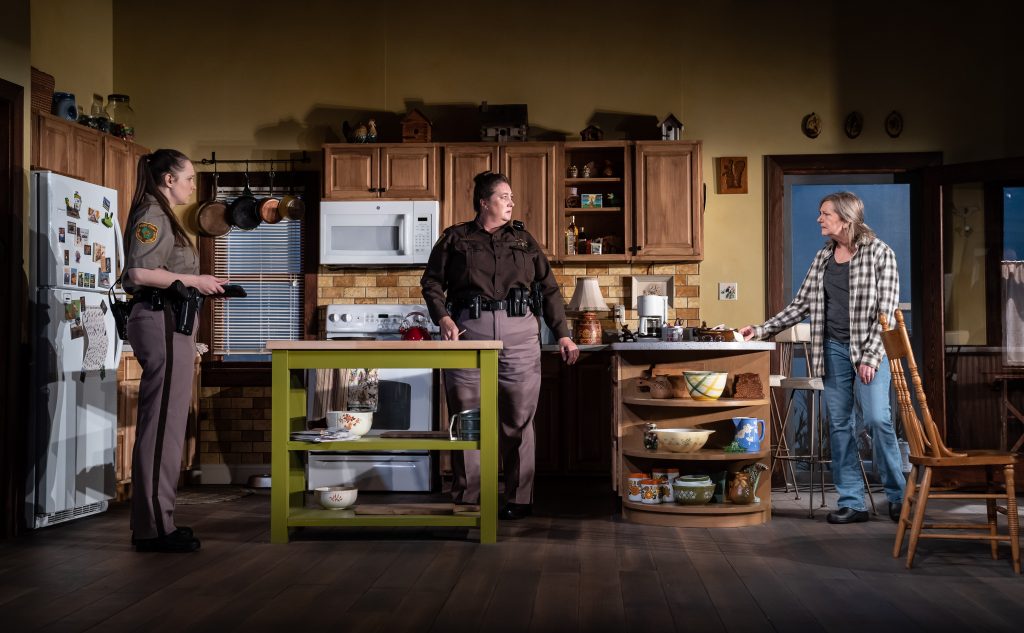 Mostly, Peg props up Ryan against the stigma of his rap sheet and the suspicions of the local sheriff. To playgoers of a certain age, the relationship between Peg and Ryan might recall the relationship in Robert Anderson’s “Tea and Sympathy”(1953) between the headmaster’s wife and the young man stigmatized as homosexual. An homage, perchance? The parallel is made all the more striking by the directorial choice to portray Ryan as an often sulky, wide-eyed innocent. Ryan’s life experience, including the trauma of nearly killing a man and his years in prison might suggest a less-stagey, more dimensional character. Never mind. States of mind shift wildly when Ryan’s present. Peg’s suicidal leanings, Ryan’s need for her and the suspicions against him lead to an old-fashioned plot twist and reveal. What’s more, the twist pushes the play to explore the mindsets that feed the country’s political divide. It happens subtly at first, but Gilman hangs many of the day’s big issues—ecology, victim-blaming, rust belt blues, a mental health crisis—on the plot and character conflicts that follow. It’s either poignant or virtue signaling, depending on which side you swing on.

Disappointingly, a late-hour bit of dramatic tension comes at the point of a gun. So blithe. So predictable. Especially for a playwright working to show us the quotidian tensions that squeeze us in social life, commerce and amid the terrifying degradation of the natural world. There’s plenty of violence in those to explode later in the play. Instead, Gilman lets the audience off with a neat, sentimental, even churchy swing at the end. It feels tacked on; fake. That may be by Gilman’s design, because when it comes to positive mental states, we may have to fake it until we make it.

What is abundantly clear is that Gilman is in touch with how our time makes us all victims of wild swings in our mental states. More importantly, she shows us the resilience we must all muster to navigate our way through our own states, the volatile states of those around us. And also how we must navigate the disordered world states that our disordered mental states create. The world may swing on a string, but it’s high-strung. If the play feels as though it is still a work-in-progress, perhaps that’s an inevitability when the theme is flux.

The production is marked by several fine performances, including Anne E. Thompson as a young sheriff’s officer and Kirsten Fitzgerald as her boss. All the action takes place in Peg’s kitchen and an adjacent sitting area. The evocative set, designed by the always-meticulous Todd Rosenthal, is so full of Wisconsin charm and late-century cabinetry that one may leave the theater and head for the nearest brandy old-fashioned.