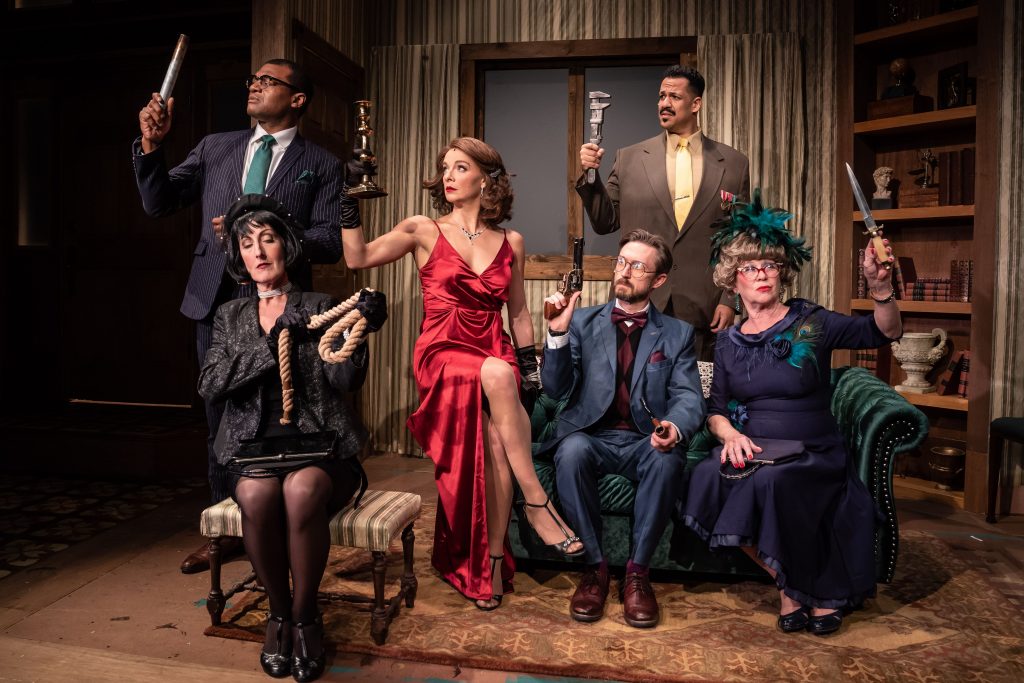 Whether you’re a fan of the board game or the movie, or if you just love to belly-laugh over witty rejoinders and beautifully executed stand-up comedy, “Clue” at Mercury Theater is just the thing for your weary, winter-is-upon-us spirit. This whodunit finds six strangers called to a spooky mansion for a dinner party that turns deadly, again and again and again. Bearing in mind the number of rooms, potential murder weapons, and the outsized characters and motivations, the audience is left to follow the troupe as they race about, physically, mentally and emotionally, in search of clues, alibis and opportunities. Throw into the mix a maid, a cook and uninvited drop-ins and balletic hysteria is what’s for dinner.

Fans of the movie version of the story imitate the stars who essayed the crooked protagonists at the drop of a hat. Who can resist Madeline Kahn’s Mrs. White, Eileen Brennan’s Mrs. Peacock, Lesley Ann Warren’s Miss Scarlet or Martin Mull’s Colonel Mustard? But the crowning achievement of the movie is the performance of Tim Curry as Wadsworth, the supposed butler of the house. As the evening’s factotum and puppet master, Curry corralled both the rhythm of the plot and the comedy, setting a tone that kept everyone in the same play.

In L. Walter Stearns’ excellent production, the players meet the challenge of bringing to life roles created by comic megastars and making them their own by repeating key bits of business that are reminiscent of those in the movie while fleshing out the characters in a fresh manner. And none is more adroit at toeing this delicate line than Mark David Kaplan (Wadsworth). Kaplan scampers in both feet and rubber face, and his pointed one-liners are spot-on. McKinley Carter (Mrs. White) gives a nod to Kahn in her speech about the flames on the side of her face, but otherwise gives the role her own twist. Nancy Wagner (Mrs. Peacock) is spectacularly hysterical in all the right ways, and Erica Stephan (Miss Scarlet) gives Warren a run for her money in the fierce-and-cheap game. (And how does she manage to stay in that nearly-nothing of a gown?) Playing dumb in a comedy is no easy assignment, yet Jonah D. Winston (Colonel Mustard) puts the brakes on the clown car every time he makes an incomprehensibly stupid remark. Kelvin Roston, Jr. makes a terrific Mr. Green, Andrew Jessop nails Professor Plum, Tiffany T. Taylor dances through the shenanigans with ease as the maid Yvette, and Honey West’s cook is a study in how to walk with a scene in which you have no lines. (Spoiler alert! West wields a meat cleaver with the finesse of a regular practitioner, and drops dead after being shot in a doorway as gracefully as can possibly be imagined.)

So put on your Sunday clothes and your mask and take yourself back to the theater. Why not begin with this rollicking comedy? (Aaron Hunt)