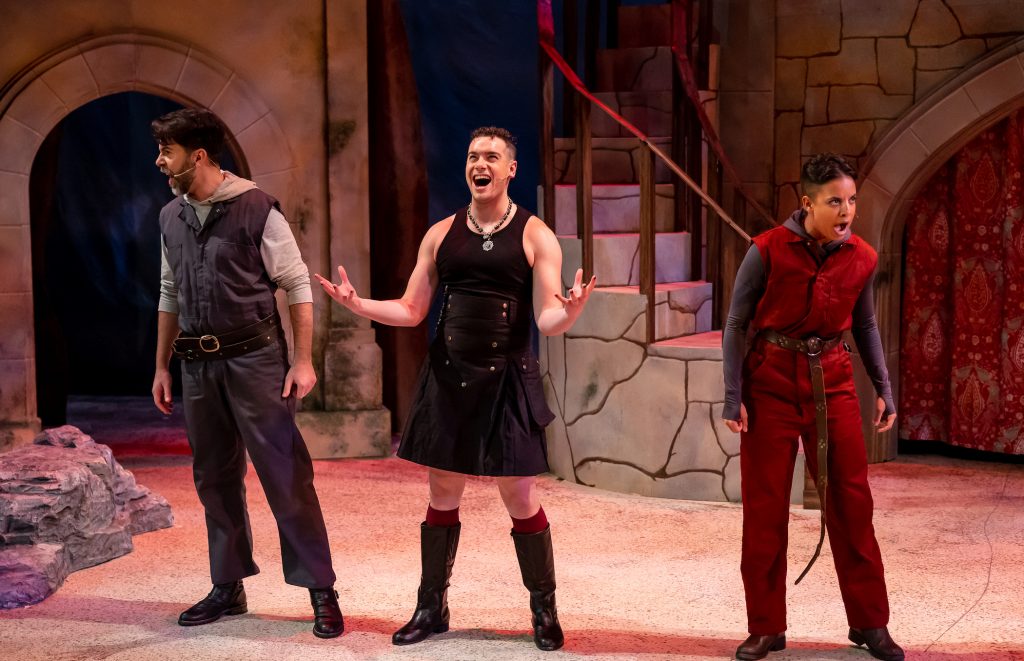 The Broadway writing team of Lerner and Loewe created a shining moment known as “Camelot,” premiering on Broadway in 1960 with Richard Burton in the lead as Arthur (the King at the head of the famed round table), practically perfect Julie Andrews as Guenevere, and a tall, handsome, young Robert Goulet, forced to admit in a rich baritone that he could do marvels as Sir Lancelot. The music was marvelous, spinning out some of the most revered musical theater ballads of any age, along with choral moments of grace and power. The book was superbly theatrical, giving Burton every opportunity to lure the audience to his Kingdom and offer them a glimpse of what “happy ever aftering” might look like. While four Tony Awards were granted, with Andrews nominated as well, it seemed that Camelot was too much of a good thing. It was overly long and too wordy for some, and perhaps most importantly, expensive to produce, with hordes of choristers, hearty parapets and piles of armor. In subsequent years (as is the case with so many large-scale musicals deemed “problematic”), “Camelot” has been adapted repeatedly, with the whispered remonstrance that it must be taken in hand and made shorter, with fewer characters, fewer monologues, and overall made much less pricey to mount while maintaining as much of the music as possible.

Music Theater Works offers a cutting by David Lee, as directed by Brianna Borger, that promises to focus on the characters, setting aside fussy pageantry. Mind you, this is the type of song that is sung when producing a reduced, golden age American musical. Always an iffy proposition, it can work if the expunging and pasting is carefully wrought, and then it is all brought to life by singing actors who excel at both sides of their craft. Borger’s production is one of those lucky ones, as long as the audience (the most important character in the house for any theatrical event) is ready to accept that this version is seriously scaled-down and refocused. Music Theater Works (once Light Opera Works), known for operatic singing and full orchestras, continues to seek a new audience and fresh artistic expression, and the audience needs to understand the ride in order for the vibrations to flow across the footlights. Let the performers lead you by the hand, and do not ask it of the book here.

This production steps further away from yesteryear’s expectations in the delivery of the music. Music director Linda Madonia’s singers appear coached at times to speak rather than sing, perhaps to provide a more naturalistic delivery, which falls more easily on a younger audience’s ears. Unfortunately, this score is written to be sung full-out and open-throated, and the very truth that may be sought here is lost in confusion when the singers whisper rather than sing; the microphone can only share what is phonated. And it is not as if they cannot deliver, requiring some finesse in the performance to disguise a lack of skill or talent, for when they do sing, they do it marvelously.

Michael Metcalf’s Arthur is a fine specimen indeed, witty, winning, and as truly vulnerable and human as are we all. Nathe Rowbotham’s Lancelot is charismatic and enigmatic, and Christine Mayland Perkins’ Guenevere most successfully blends the original production’s vocal ethics with this production’s new reachings. Perkins sings beautifully, pouts intelligently, and gives more in her silences than many can do with lines. The supporting players are uniformly excellent, all clearly capable of bigger assignments. The knights of Hannah Mary Simpson, Tommy Thurston and Sarah J. Patin win even when they lose in battle, with vibrant, pedal-to-the-metal performances, and Ari Magsino is terrific as Tom of Warwick. Parker Guidry is simply fantastic as Mordred, never missing an opportunity for beguilement or bewitchery.

The song “How To Handle A Woman” is out-of-step in this production. While it is probable that the production contract required that the music, as cut for the production, must be performed intact, with so much else necessarily lost, this might have slipped away, unnoticed.

If you are a fan of the musical or the film, you may miss Merlyn, Pellinore, Nimue and Morgan le Fey in this production. But you will also relish the ardent performances on display, and carry away a story that requires you to consider the current state of the world, and ponder if “Might for Right” will ever be the order of the day. (Aaron Hunt)