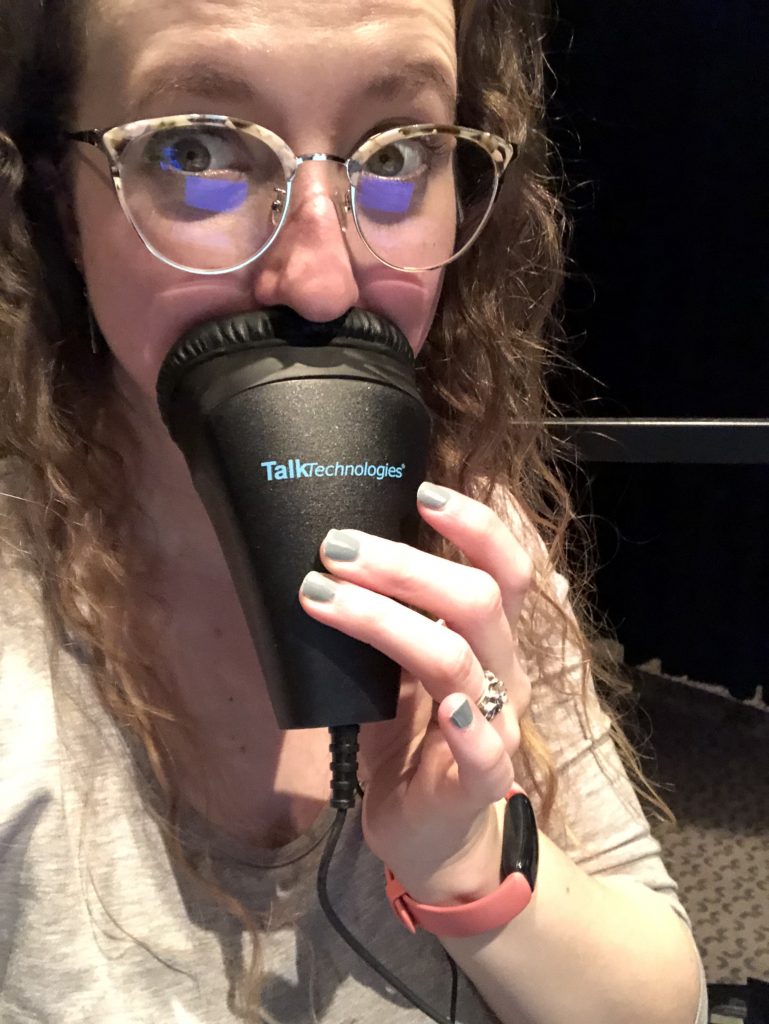 Emily Means Wills is a guide to theatrical action—a careful narrator of the balled fist, the glance at the door, the cow doing the can-can.

She doesn’t want to say a woman looked at a man “desperately”—that’s interpretation. So she’ll say the woman looked, and kept looking. She once had to figure out a way, during a performance of “Midnight Cowboy” at Lifeline Theatre, to describe a “super-grisly” scene of a  big black phone getting jammed into someone’s mouth, and blood going everywhere.

Wills has a unique place in Chicago theater—she does audio description. This means she helps audience members who are blind, or have low vision, experience live theater by describing what’s happening on the stage. Often wearing a mask that covers her mouth, Wills talks into a microphone to audience members who are equipped with headsets, describing for them what happens between the dialogue. At smaller theaters, she might sit in the back—at the Steppenwolf she is in a booth above the audience.

“I describe the most important things so the audience members can follow along and get the emotional roller coaster of live theater,” says Wills, twenty-nine, who works for Lifeline, Steppenwolf, Northlight and other theater venues. She says there’s a big need for audio describers now, since many left the field during the pandemic when theaters closed down, and they haven’t come back. “It’s gotten harder for theaters to find people,” Wills says. “It’s a pretty specific skill set.”

Audio description is one of the ways theaters can make performances more accessible for people with disabilities. Sign language or captioning—either in subtitles on screens above the stage or in text form on a phone—helps the deaf and hard of hearing. Theaters also may offer “sensory friendly” shows for children who are on the autism spectrum—this may involve leaving the house lights up, keeping the sound volume down, and allowing audience members who may have trouble sitting still to take a break.

Erica Foster, former operations director and accessibility coordinator with Lifeline, started using audio description at the theater after she went to a workshop at Steppenwolf in 2014, which was showing smaller theaters how to do both audio descriptions and “touch tours.”

“A lot of the big theaters were already doing it but smaller theaters were behind the times,” Foster says. She noted that the Chicago Cultural Accessibility Consortium, founded in 2013, has helped bring accessibility programming not only to theaters but to zoos and museums. 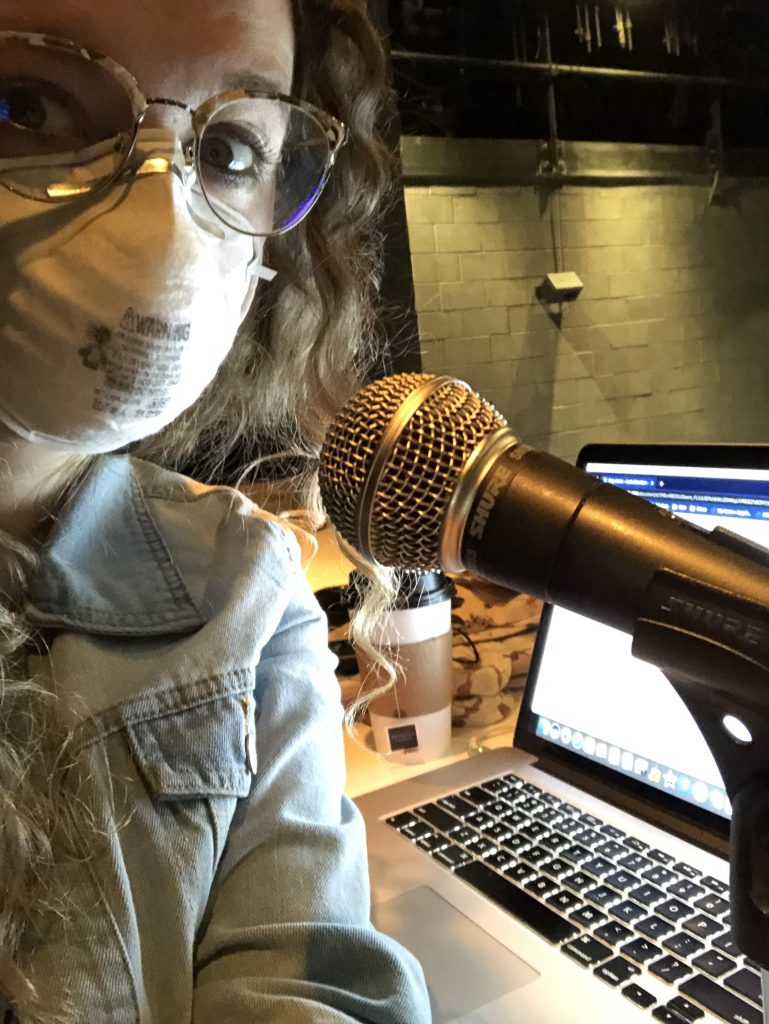 Theaters may do one audio description show per run, and it takes a lot of preparation. Wills says she usually gets a script of the play and a video of the performance. She’ll listen to the performance first, without looking at it—she may close her eyes, and work on a coloring book. “If there’s anything I’m not clear about, and I don’t laugh where there’s a laugh, or if there’s a gasp, if there’s a period of silence—those are moments I pay attention to.” Those are moments that might need description.

After Wills listens to the performance, she reads the script. Then she’ll write her audience description script and practice it, making sure she has her rhythm and pacing down, so she won’t step on any dialogue.

“Because it’s a theater performance, I have to be pretty particular about what I describe so what I’m describing fits in between actor’s lines, so I facilitate storytelling but I don’t overwhelm it,” says Wills, who has a degree from Northwestern University in theater and communications studies, with a minor in psychology. “If someone turns their head, I may not describe that, but if someone balls their hand into a fist, I might describe that.” She says intimate and emotional moments can be challenging, because she needs to describe but not give her own opinion about what gestures mean.

Will Quam, who did audio description before the pandemic, agrees with Wills that it’s important not to describe or interpret too much. You have to have faith in your audience members to figure out the interpretation themselves, Quam says. “You don’t want to say ‘He’s furious,’ but ‘He put his finger in her face.'”

Wills says she also has to be ready for the unexpected, like if a prop falls with a bang. A fun challenge is action—describing a sword fight, or the dance steps in a musical. She once described a children’s musical, with can-canning farm animals. “I love action-packed performances—sword fights are really fun, since people aren’t talking doing it.”

“You might say, ‘I’m five feet tall, I have blonde hair, I have really loud heels, I have a flouncy dress,’” Foster says. “We might do a little bit of dialogue so they can match their voice with the character.”

Quam says one of his favorite memories was when British-Irish actor Brendan Coyle (of “Downton Abbey”) gave a touch tour before his performance of the one-man show “St. Nicholas” at the Goodman Theatre in 2019. Coyle told the audience he used to like to get a massage before shows, and rubbed the scented massage oil into the hands of audience members to show them how it smelled.

If it’s a small house, Wills says an audience member might wonder who’s murmuring at the back of the theater, and give her a look. “I try to explain beforehand what I’m doing,” Wills says. “Ideally, there’s an announcement that this is an audio-described show.”

Sometimes audience members using the service will come up to Wills afterward to say “Thank you,” Wills says.

“They say I felt I was part of the show for the first time,” Wills says. “And they keep coming back, because they love it, they love the theater because they can experience it.”